The EU and Israel should resume their suspended high-level dialogue 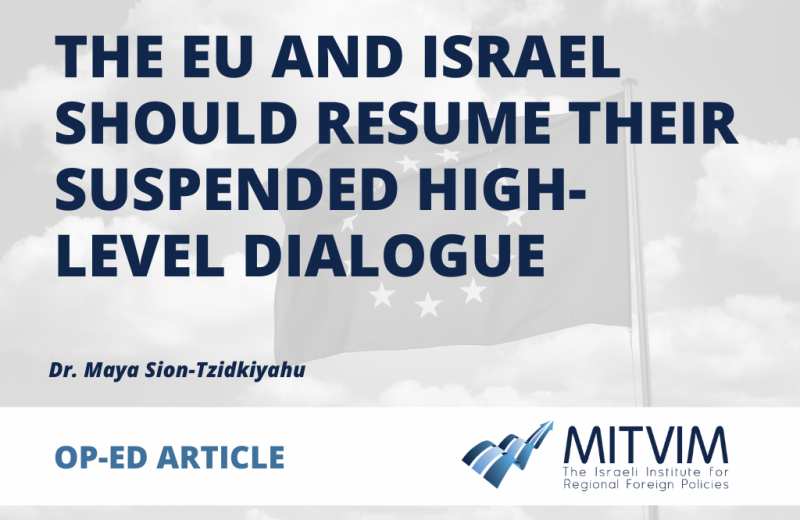 Some 100 European Parliament (EP) members and nine Knesset members (from the coalition and the opposition) sent a letter to European Union Foreign Affairs Minister Josep Borrell on June 23 urging resumption of the annual EU-Israel Association Council meetings, the ministerial-level dialogue last held between the sides eight years ago.

The letter, instigated by Antonio López-Istúriz White, chair of the European Parliament Delegation for relations with Israel, protested the EU’s attitude toward Israel, noting that while the EU continues to hold annual Association Council meetings with Israel’s non-democratic neighbors, such as Egypt, Jordan and Morocco, and even signs new agreements with them, it last convened the ministerial-level dialogue with Israel in 2012.

In 2013, Israel canceled the annual meeting to protest EU instructions excluding territories beyond its 1967 borders from all Israel-EU agreements. Borrell’s predecessor, Federica Mogherini, led several attempts to reconvene the Association Council, but failed due to reservations on the part of certain EU members during a freeze in the Israeli-Palestinian peace process and tensions in Israel-EU relations. The Association Council did not reconvene, and the regular high-level dialogue was halted.

The dialogue, which brought together EU foreign ministers with their Israeli counterparts, was launched within the framework of the 1995 Association Agreement between Israel and the EU. Its aims were to discuss issues of importance to each side and convey messages in a better, more precise and effective manner than those conveyed by so-called “megaphone diplomacy” (exchanges through media channels in times of tension, which tend to be aggressive and conflictual).

The high-level meetings allowed both sides to examine the state of their relations and to seek paths to advance them. Such meetings entail months of preparations by relevant government agencies in Israel and the EU to ensure an optimal outcome.

Cooperation between Israel and the EU is conducted on an unusually high level. It encompasses economic ties (a free-trade agreement on goods and even agriculture), science, innovation and development (the Horizon program), higher education (the Erasmus+ program), aviation (the Open Skies agreement), and more.

HOWEVER, ALONG with the flourishing economic ties, diplomatic relations have deteriorated under the previous Netanyahu governments to a low ebb, exacerbated by Netanyahu’s attempts to drive a wedge between EU members to scuttle resolutions critical of Israel.

Israel’s new government, which includes the centrist Blue and White Party and in which Gabi Ashkenazi serves as foreign minister, may enable improved ties with the EU and allow renewal of the beneficial high-level political dialogue between the sides. Initial positive exchanges between Ashkenazi and Borrell indicate that both sides are seeking constructive engagement.

Lopez and other signatories of the letter to Borrell (many of them members of the EP’s largest faction, the center-right European People’s Party, which includes supporters of Israel) believe the time is ripe for a new page in relations. However, their initiative is highly speculative.

If the Israeli government annexes even a small part of the West Bank, the Association Council will not convene any time soon. The Europeans view any annexation as burying the two-state solution and violating Palestinian rights and international law. Annexation would be a game-changer. Some 1,000 EP members from 25 states recently signed a letter condemning the planned Israeli move.

Should resumption of the Association Council meetings depend on the annexation issue? The demand for the EU to reconvene the council is a substantive one. Since 2014, the EU (and especially a number of members) have adopted a discriminatory attitude toward Israel in refusing to do so. If the EU supports high-level dialogue with other countries regardless of their democratic and human rights performance, it should not impose preconditions on Israel.

The Israeli government and the EU’s Foreign Affairs Council have grown accustomed to the absence of a regular, established diplomatic dialogue between them. Such a dialogue could well be tough for both sides and critical in nature, but it must take place.

Foreign Minister Ashkenazi and High Representative Borrell, who already agreed to meet each other in Brussels, should work together to reconvene the Association Council, and thus enable an annual high-level political dialogue between Israel and the EU to take place.

Israel-EU
Prev
All Publications
Next