Israelis, Palestinians both got something from Biden visit despite low expectations- analysis 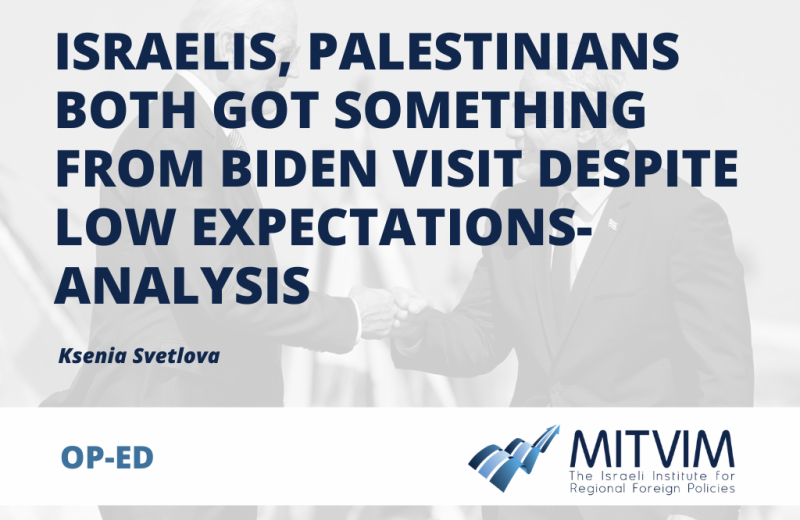 Leaders in Jerusalem and Ramallah knew that the focal point of the American presidential visit to the Middle East was Saudi Arabia: If not for the war in Ukraine and soaring energy prices, the visit might not be happening at all. Yet despite the low-key expectations, both parties achieved some of their goals. The question is whether they can be presented as achievements to their respective publics.

No to a nuclear Iran

“Consistent with the longstanding security relationship between the United States and Israel and the unshakeable US commitment to Israel’s security, and especially to the maintenance of its qualitative military edge, the United States reiterates its steadfast commitment to preserve and strengthen Israel’s capability to deter its enemies and to defend itself by itself against any threat or combination of threats” – the Jerusalem US-Israel StrategicPartnership Joint Declaration.

While there were no surprises in President Joe Biden’s references to Iran during his visit − after all, then-Prime Minister Naftali Bennett already heard a firm American commitment not to let the Islamic Republic turn nuclear during his visit to Washington a year ago, the so- called Jerusalem Declaration now signed by President Biden and Prime Minister Yair Lapid both cemented the oral promise and presented a new opportunity to Israel.

“Anchoring this principle in a declaration of partnership and defining it as bipartisan, inviolable and in the American interest of national security − this is a step up,” Col. (res.) Udi Evental, an expert in political-military policy and strategic planning, tells The Media Line. “The direct linking of the QME [qualitative military edge] clause to the commitment not to allow Iran to ever have nuclear weapons – is another step up which implies a willingness to arm Israel accordingly,” he continues. Evental also stresses the importance of a commitment to another Memorandum of Understanding on US aid by 2028. “These commitments are very important. Now Israel has to do the hard work and pour some real substance into them,” Evental says.

However, if someone in Israel had hoped to hear from the American president a bolder statement regarding the military option vis-à-vis preventing Iran from obtaining nuclear weapons, they were disappointed as President Joe Biden resorted to the vague promise that the US would “use all elements of its national power to ensure that outcome.”

On Sunday, soon after the Jeddah summit and the presidential visit to the Middle East were over, Kamal Kharrazi, a senior foreign policy aid to Iran’s Supreme leader Ali Khamenei, said that “Iran has the technical capabilities to produce a nuclear bomb.” He added that Iranian scientists have the tools to enrich uranium to the military level of 90%.

In a televised interview on Qatar’s Al Jazeera channel, Kharrazi also stressed that his country has yet to decide whether to build such weapons.

“13 min in Augusta Victoria [Hospital in East Jerusalem] is all what Palestinians have got from Biden. Visiting Church of Nativity was pilgrimage, not politics. [PA President Mahmoud] Abbas meeting was business (the 4G [telephony frequencies]) not politics. Abass [sic] was informed previously by [Secretary of State Antony] Blinken & Barabara leaf [Assistant Secretary of State for Near Eastern Affairs Barbara A. Leaf] not to talk politics when receiving Biden” – that’s how Samer Sinjilawi, a Palestinian political activist and chairman of Jerusalem Development Fund, described the dynamics of the presidential visit to Palestinian Authority on Twitter. A quick look at Palestinian social media shows that Sinjilawi’s words are an accurate expression of the sentiment on the Palestinian street. Expectations were not high to begin with, as many Palestinian, Israeli, and international media had stressed in previous weeks that President Biden’s visit to the PA would not carry any substance and is in fact be a mere formality.

While in Jerusalem and Bethlehem, President Biden took a cautious approach, saying that a two-state solution is still America’s preferred way to resolve the conflict, but that this was impossible to achieve in the near future. According to Gershon Baskin, a veteran peace activist and an expert on the Palestinian- Israeli conflict, this was expected due to current political circumstances.

“The Americans are unable to do much, due to a political system that is dysfunctional in both Israel and the PA. The only positive thing that happened in regards to the Israeli- Palestinian problem is the Saudi statement that binds together normalization with Israel and the two-state solution. In regards to the Americans, I believe that if they were truly serious about the two-state solution, they would recognize the Palestinian state in order to at least preserve this option,” Baskin tells The Media Line. According to Nidal Fuqaha, who heads the Palestinian Peace Coalition, although there is disappointment with the visit and its outcome among the broader public, there are some definite positive points for the PA.

“This visit was conducted against the background of four tough years of Donald Trump’s presidency. President Biden clearly spoke about the two-state solution, and although we know that nothing will happen prior to the Israeli elections [on November 1], this is still a positive development. Also, the financial support for Palestinian hospitals, the issue of 4G, the permits for Gazans who reside in the West Bank – all these small initiatives that took place as a result of Biden’s visit and his meeting with Abu Mazen [Abbas] are definitely positive steps in the sphere of American-Palestinian relations,” Fuqaha tells The Media Line. “Naturally, we all need the political horizon – the PLO office in DC, the American Consulate in East Jerusalem – these issues are still not progressing, and we are looking forward that the administration will fulfill its promises to the Palestinian people in this regard,” says Fuqaha.

Dr. Lior Lehrs, director of the program on Israeli-Palestinian Peacemaking at Mitvim – The Israeli Institute for Regional Foreign Policies, adds to the list of Palestinian accomplishments the issue of the Allenby crossing, the only international border available to the Palestinians with Jordan, which will now work 24 hours a day.

Yet, he indicates that Palestinian society doesn’t see a big achievement in these small but very visible improvements. “Abu Mazen today is in his weakest position, and it is doubtful that the 4G, the permits or the funding to hospitals in East Jerusalem will strengthen him politically, even if they will positively impact the lives of Palestinians in the West Bank. The Palestinians understand that these steps are part of ‘minimization of the conflict’ rather than of its solution,” says Lehrs.

Israel-Palestine / Israel-USA
Prev
All Publications
Next