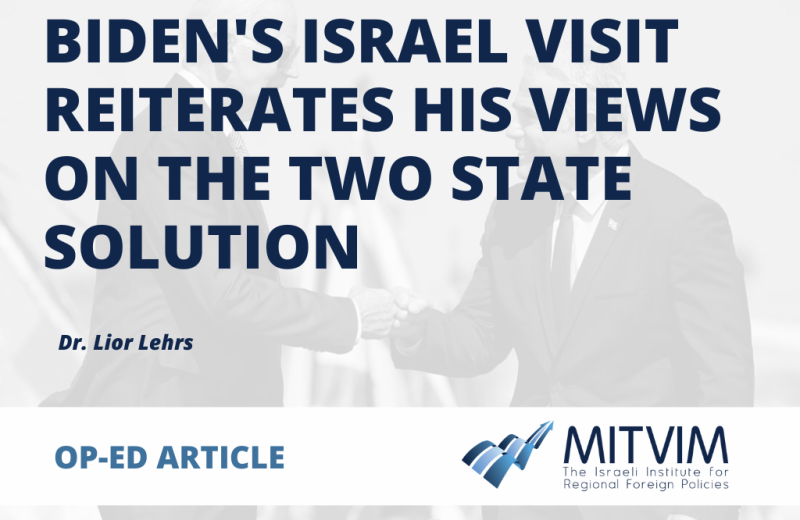 In a speech delivered during his visit to the Augusta Victoria Hospital in East Jerusalem, President Joe Biden referred to his family’s Irish background, drawing parallels between the Irish and their struggle for independence from the British and the Palestinians. He quoted Irish poet Seamus Heaney as writing that although history sometimes encourages hopelessness, there are unique moments when “hope and history rhyme.”

Biden expressed his hope that such a moment will someday be reached. This statement reflects Biden’s approach to the Palestinian issue as expressed during his visit to the region: on the one hand, empathy and the outline of a long-term political vision, on the other hand, skepticism about progress in the short term and avoidance of discussing a tangible peace plan.

A discussion of the issue is, of course, influenced by the point of reference, whether we compare Biden’s policy to those of Trump or Obama or to the expectations of Israel and the Palestinians. A distinction must also be made between the declarative level of the visit and the measures discussed.

An analysis of Biden’s rhetoric shows that the administration reaffirms support for the two state solution and the importance of maintaining a political horizon. Biden emphasized, in his remarks in Bethlehem, that the solution should be based on the 1967 lines with agreed land swaps. In other words, he reiterated American policy that preceded Trump, which was supported by Presidents Bill Clinton, George Bush and Barak Obama. Biden expressed solidarity with the suffering of the Palestinians (referring, among other things, to restrictions on movement), and stressed that both sides deserve equal measure of freedom and dignity.

On the other hand, Biden’s statements made it clear that the US does not believe prospects for political negotiations have matured at this time, and in remarks he delivered upon landing in Israel, he said that while he advocated the two state solution, he was aware it would not materialize anytime soon. The lack of urgency of the issue was also reflected in the ambiguous wording of the Jerusalem Declaration, signed by Biden and Prime Minister Yair Lapid (with a commitment to “discuss challenges and opportunities in Israeli-Palestinian relations”). The Palestinians were discouraged by Biden’s failure to address the settlements and the occupation.

On the question of Jerusalem, Biden took a cautious stance and spoke of a city for all its people, central to both sides’ national visions. He noted that the US recognizes Jerusalem as the capital of Israel, but added that the division of sovereignty over the city would be determined by negotiations.

His visit to a Palestinian hospital in east Jerusalem, unaccompanied by any Israeli official, was unusual (he was preceded by a Blinken visit to America House in east Jerusalem), but Biden was careful to present it as a private humanitarian visit, and he did not repeat his promise to open the US consulate in Jerusalem, which served as the liaison with the Palestinians but was closed during the Trump era.

Therefore, given that the Biden administration clearly does not intend to advance any peacemaking effort in the Israeli-Palestinian arena in the near term, where is it going? Biden’s statements and actions suggest several policy directions. First, since taking office, Biden has renewed ties between Washington and Ramallah (after a rift created during the Trump era) and restored the economic aid that had been discontinued. In this context, on his visit Biden announced an aid package for hospitals in east Jerusalem, for UNRWA, and for food security.

These measures are part of an American policy aimed at improving Palestinians’ daily lives. Support for initiatives to strengthen the Palestinian economy are also mentioned in the Jerusalem Declaration, which is in keeping with the shrinking-the-conflict approach supported by senior Israeli government officials.

IN THIS context, Biden took advantage of the visit to announce a number of economic and civil measures, with Israeli consent, including upgrading the cellular phone network in the West Bank and Gaza to 4G technology, opening the Allenby Crossing (between the Occupied Territories and Jordan) 24 hours a day, seven days a week, and reviving the Israeli-Palestinian Economic Committee (JEC). These and other measures were discussed in the past, but did not materialize.

Palestinians have been critical of Biden’s focus on the economic context, without promoting a structural change in the current situation. A Palestinian nurse who attended the president’s speech at Augusta Victoria thanked him for supporting the hospital, but added, “We need more justice, more dignity.”

In his remarks in Bethlehem, Biden tried to link these steps to a political vision, portraying them as measures that could feed the flame of hope, but they appear to be disconnected from a political context. This is compounded by Palestinian anger at the administration for failing to re-open the consulate in Jerusalem and the PLO’s offices in Washington.

Second, Biden pointed to an additional interim goal of steps to bring Israelis and Palestinians closer together. That includes measures to promote dialogue at the leadership level (such as between Lapid and Abu Mazen) and to encourage people-to-people ties. During his visit, Biden announced two additional grants within the framework of the MEPPA (Middle East Partnership for Peace Act) initiative for joint civil society projects in healthcare and technology.

Third, Biden presented another policy direction of using the normalization process in the region as a tool to renew the Israeli-Palestinian peace process. This was reflected in part by Morocco’s involvement in the contacts between Israel, the US and the Palestinians on expanding the Allenby Crossing hours of operation and in reported American efforts to integrate the Palestinians into regional forums being created in the wake of the Abraham Accords and the Negev Summit.

On the other hand, Mahmoud Abbas stressed to Biden that the process had to be reversed, starting with an Israeli-Palestinian agreement and then moving on to a comprehensive Israeli-Arab peace, in accordance with the Arab Peace Initiative (2002). Senior Saudi officials backed this position, despite the aviation normalization measures, and declared during Biden’s visit that normalization would be possible only after the two state solution was implemented. In doing so, Saudi Arabia reiterated its commitment to the Arab Peace Initiative and made clear that its relations with Israel are limited by a glass ceiling.

At the same time, the administration has been drawing red lines regarding Israeli policy on the ground. While Biden did not refer publicly to the settlements, he made it clear behind closed doors to his colleagues in Jerusalem that he expects zero surprises on the Palestinian issue, including measures in east Jerusalem and the expansion of West Bank settlements.

This stance continues the Biden administration’s involvement in issues such as foiling the plan to build a neighborhood in Atarot or preventing the evacuation of Palestinian families in the Sheikh Jarrah neighborhood. The current administration is clearly acting quietly on these matters, avoiding public statements, apparently as a lesson from the Obama era. What is more, Biden does not want to politically hurt the current government and; therefore, prefers to deal with these issues behind closed doors.

In conclusion, the Biden administration has signaled from the start that the Palestinian issue is not a high priority on its agenda and while it boasts of reversing various moves made by Trump, in other areas it has not undone the changes he made. The administration has taken a two-pronged approach, promoting measured civil-economic steps and actions to prevent escalation, and offering a distant political vision of two states, and an equal measure of freedom and dignity.

With the visit over, the administration must work to connect the two components and formulate a strategy that connects the near-term steps to the long-range vision. Although we are under a transitional government and in the midst of another election campaign, the administration should take advantage of this stage to translate the declarations on a political horizon into an action plan for the day when hope and history rhyme.