Russia is forming an alliance of pariah states in the Middle East. It might put Israel in an awkward situation in Syria 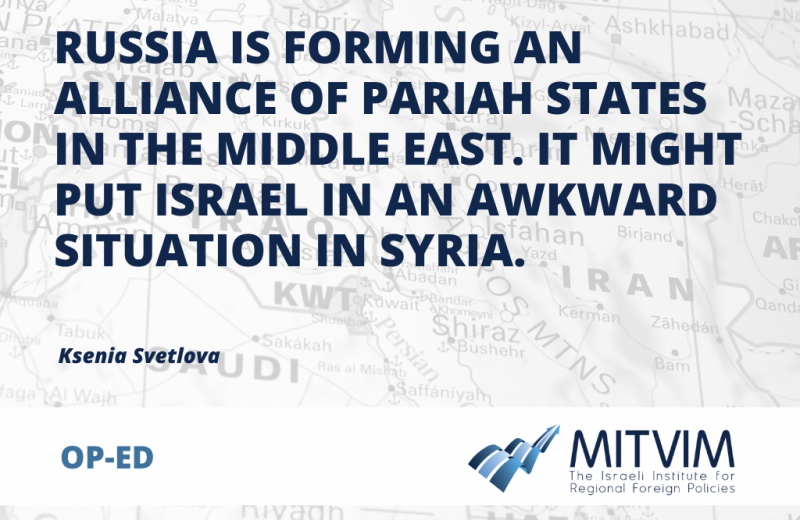 Every visit by a foreign leader to Iran draws considerable attention, not to mention criticism, in Israel. A visit, however, by Russian President Vladimir Putin, the leader of a global power working to establish an anti-American axis, is cause for greater concern. While bilateral cooperation between Russia and Iran is not unprecedented, Israel has hoped such relations would remain limited in scope due to the engrained competition between the two for influence in Syria and Moscow’s fear of getting too close to a “regional pariah.”  As recently as 2018, some Israeli experts and policymakers even hoped that Russia would “squeeze Iran out of Syria” for Israel’s benefit.

Today, the gloves are finally off. For lack of other options, Russia is opening to Iran and is preparing to establish a new alliance of pariah states with the Islamic Republic—to the detriment of Jerusalem. This turn in Russian strategy poses a grave new challenge not only to Israel, but the United States.

The sum of all fears

It is still unclear whether, during a July 19 trip to Tehran, President Putin succeeded in securing a deal with the Iranian leadership to purchase Iranian weaponized Unmanned Aerial Vehicles (UAVs). In Tehran, Putin met with Supreme Leader Ayatollah Ali Khamenei as well as with President Ebrahim Raisi and Turkish President Recep Tayyip Erdogan—the guarantors of the Astana process, launched in Kazakhstan’s capital in 2018 in order to promote a peaceful solution for Syria, which will take into consideration the interests of Russia, Iran, and Turkey.

Before his visit, Western sources leaked details about Russian interest in Iranian-made drones, such as the Ababil and Mohajer models, and US National Security Adviser Jake Sullivan briefed reporters about US intelligence that such a deal was under consideration. The Iranian government denied that the deal was discussed during the summit in Tehran and Russian leadership has so far remained silent. If consummated, the acquisition of Iranian-made UAVs by Moscow would spell bad news for Ukraine, as it would pose a new threat to the Ukrainian defense. But military experts in Israel also fear potential consequences in the Middle East.

In recent years, Israel has reportedly conducted hundreds of air strikes in Syria, targeting Iranian military equipment and installations. Sources in Israel’s defense establishment told me that Iranian UAVs present a genuine and increasing threat to Israel. In March, two Iranian drones intended to explode in Israel were shot down over Iraq by American fighter jets. Meanwhile, on July 7, Lebanese militant group Hezbollah attempted to target Israel’s Karish gas facility in the Mediterranean Sea with drones, which were downed by the Israel Air Force. Now, Moscow’s acquisition of Iranian drones might also enhance Russia’s ability to project power in the Middle East, sources in Israel’s defense sector believe.

Yet, while the Iranian-Russian drone deal has been widely covered, another important, less-discussed aspect to military cooperation between the two counties is Russian weapon sales to Iran. For the last two decades, Israel’s leadership has invested considerable political capital into building relations with Moscow.

Among the chief goals of this effort was to thwart the strategic sale of Russian weapons to Iran. The United Nations arms embargo on Iran expired in 2020 and, since then, it is rumored that Iran intends to resume its arms trade with Russia—both as an exporter and importer. This issue has been a consistent concern to Israel since the 1990s. It was raised with Putin by then-Prime Minister Ariel Sharon in November 2003 and again in October 2008, when then-Prime Minister Ehud Olmert announced a mechanism would be created to discuss Russian weapon sales to Tehran and Damascus. Most recently in October 2019, then-Prime Minister Benjamin Netanyahu claimed that Russia had canceled a big weapons sale to Iran due to his negotiations with the Russian leader.

Yet, despite Israeli pleas, Hezbollah was able to acquire Russian rockets, which it fired on Israeli territory during the second Lebanon War in 2006. Later, Russia supplied both Iran and Syria with S-300 advanced air defense systems (Syria also received S-400 in 2015). In late July, Israeli Defense Minister Benny Gantz confirmed that, in May this year, Russian forces in Syria had opened fire on Israeli jets using advanced S-300 anti-aircraft defense systems during an Israeli air force attack on targets in Syria’s northwest.

Today, with Russia’s economy strained and its access to markets is limited due to Western sanctions, deepening cooperation between Moscow and Tehran appears inevitable. For Iran, it might be the perfect chance to acquire Russian-made weapons, like the SU-30 fighter jets, that were previously unavailable due to the Kremlin’s concerns about Western sanctions against Iran. The Iranian shopping list is long, and Israel fears that there are no levers or sources of pressure to stop this deal in the current environment.

Along with Russia’s growing isolation, which dictates closer military and economic integration with countries like Iran and North Korea, tensions between Moscow and Jerusalem have been growing since before the outbreak of the war in Ukraine.

Since the beginning of 2022, Russia’s tone towards Israel has become more aggressive, often harshly rebuking Israel for its alleged military activities in Syria. When the Russian offensive in Ukraine began, Israel desperately tried to formulate a balanced foreign policy vis-à-vis Moscow and Kyiv to satisfy both parties. Five months into the war, neither party seems to be satisfied. While Ukraine demands that Israel provide it with military assistance, Russia is fuming over then-Foreign Minister and current Prime Minister Yair Lapid’s remarks over Russian war crimes in Bucha. The latest Russian retaliatory slap is a threat to halt the activities of the Jewish Agency, an Israeli non-governmental organization providing services and immigration assistance to Russia’s Jewish population.

Today, due to the war in Ukraine, camps in the Middle East are being quickly redefined: the comfortable position of neutrality that allowed regional states to cooperate with both superpowers is no longer an option. While many Middle Eastern leaders still welcome Russian Foreign Minister Sergey Lavrov and send their envoys to Moscow, how many will acquire Russian weapons, risk sanctions, and take a hit to their frail economies?

For Israel, the region’s biggest recipient of US military aid and the United States’ closest ally in the Middle East, there was never a doubt as to which camp it belongs. And, yet, during the last two decades, Israel found ways of growing closer to Russia, even as Moscow grew closer to Iran, Syria, and Hezbollah. In 2009, the two parties signed a contract to deliver twelve Israeli UAVs to the Russian army. In 2014, Israel refused to denounce Russia’s annexation of Crimea despite US pressure. Furthermore, since the beginning of the war in Ukraine, Israel has again refused to supply Ukraine with military aid, citing its concerns over a possible curtailment of its activities in Syria by the Russian military.

Russia’s recent rapprochement with Iran, its growing criticism of Israel, and its moves aimed against Israeli and Jewish organizations in Russia leave no room for doubt that Moscow and Jerusalem might be bound for some kind of confrontation, and relations between the countries are likely to deteriorate further. While Israel still hopes that the Jewish Agency will remain in Russia, there is no doubt that it is difficult for both countries to return to a pre-Ukraine-war reality.

Even if Israel were to completely refrain from making any statements on the war in Ukraine, Russian cooperation with Iran—and its regional proxies—would still be inevitable due to profound global geopolitical shifts. The current tension around the Jewish Agency might be diffused if Benjamin Netanyahu is reelected on November 1, given his close relationship with the Russian leader. Netanyahu hasn’t made any Ukraine-related statements but blamed Lapid for the current crisis. His supporters believe that it will be easier for him to mend ties with Moscow rather than with Lapid. Nevertheless, Netanyahu will find it difficult to brag about his friendship with Putin while Russia is isolated by the West and Israel’s strongest ally—the United States—is throwing all its weight behind supporting Ukraine and ostracizing Moscow.

Today, Israel urgently needs a new and more confident policy on Russia. To do so, it can build on its previous experience of dealing with the Soviet Union during the Cold War era. At that time, while Israel was weaker than the Soviet Union, Jerusalem was determined to defy any limitations on its freedom of operation in Egyptian skies. Israel refused to be a Soviet hostage and showed that, in an extreme situation, it was ready to confront Soviet planes and air defenses.

It is often assumed that Russia has no appetite to open another front against Israel in Syria due to its focus on the battlefield in Ukraine, and this red line has not been crossed by Moscow yet. However, the situation might change if Russian alignment with Iran and Syria keeps expanding. If and when that happens, Jerusalem must be ready with an adequate and strong response, and with the confidence that it has the United States to rely upon.

This article is from “Atlantic Council“, from August 4, 2022

Israel-MENA
Prev
All Publications
Next