Is this a turning point in Israel- Hamas relations? – opinion 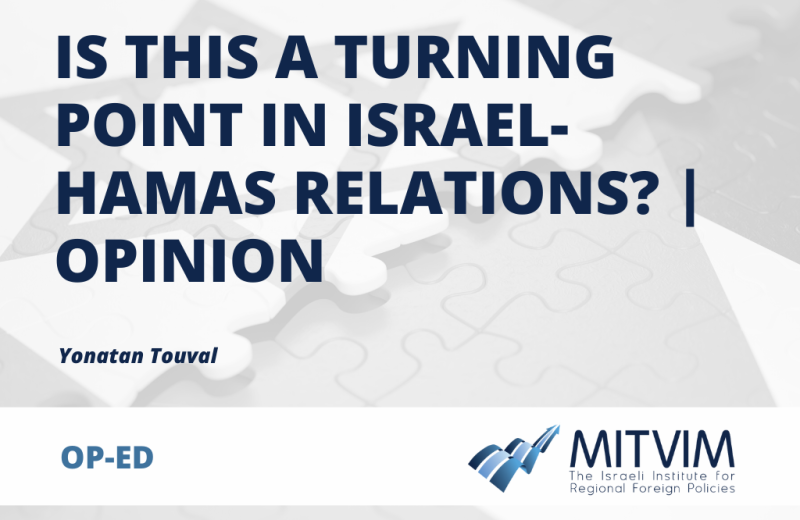 With yet another ceasefire in place following a violent round of clashes between Israel and Gaza-based militants, the recent flare-up of violence may mark a hopeful turning point—one that could potentially usher in a new and more constructive dynamic for both Palestinians and Israelis.

The reason lies in the unprecedented fact that, over the course of the 55-hour-long military clashes between Israel and the militant Palestinian Islamic Jihad (PIJ), Hamas restrained itself from joining the fighting. In fact, not only did Hamas do everything it felt it could to avoid being dragged into this mini-war, it also exerted considerable pressure on PIJ to agree to the Egyptian-mediated ceasefire that ended it.

This non-belligerent approach by Hamas was a first. For the historic record, although Hamas refrained from actively joining a similar round between Israel and PIJ in November 2019—Israeli code-named Operation Black Belt—it launched a few rockets after a ceasefire had entered into force in a symbolic show of solidarity.

To be sure, while Hamas, which views PIJ as an ideological rival, had multiple reasons not to join the fighting, Israel proved astute and careful in denying Hamas any compelling reasons to do so. It carefully side-stepped Hamas-related targets, kept to a minimum the number of civilian casualties, and avoided targeting civilian infrastructure, etc.).

In so doing, it suspended its usual policy, stubbornly held by former Prime Minister Benjamin Netanyahu, that holds Hamas responsible for any violence coming out of the Gaza Strip, giving Hamas the opportunity to decide for itself if and how to respond to the fighting between PIJ and Israel.

Israel’s policy change and Hamas’s response have created a new reality—one that reflects political maturity on both sides and, however unlikely this may sound, also a new level of mutual trust.

This new reality presents an opportunity for advancing far-reaching arrangements between the two sides, first and foremost those involving the reconstruction of Gaza (as per the Egyptian initiative of 2021) and prisoner exchange. The responsibility that both Israel and Hamas demonstrated during this last round may encourage regional and international countries, including Qatar and other Gulf governments, to make good on their past pledges for this purpose. And the current Israeli prime minister, Yair Lapid, has himself championed the need for Israeli cooperation in Gaza reconstruction efforts less than a year ago.

At the same time, a prisoner swap, which the Israeli leadership have increasingly stressed is a precondition for enabling reconstruction projects, will remove a major political and psychological stumbling block to moving forward.

That said, even as Israel develops a more constructive modus vivendi with Hamas in the Gaza Strip, the real battleground remains the West Bank, where both the PIJ and Hamas are increasing their efforts to strengthen their presence, especially ahead of a possible leadership challenge within the Palestinian Authority the day after the longtime presidency of Mahmoud Abbas ends.

From the Israeli standpoint, the West Bank should remain in focus not only for the security challenges it poses but for the centerpiece of an eventual agreement on a two-state solution. To this end, Israel should seek to leverage its non-violent dynamic with Hamas to advance the message that non-violence pays off and to demonstrate that point by adopting a proactive and sustained policy aimed at improving material and political conditions in the West Bank. In the context of the Abraham Accords, moreover, such actions may yield additional benefits from regional parties that have been hesitant until now to normalize relations with Israel.

Last but not least, although the caretaker government under Lapid has neither the political will nor the public mandate to renew peace negotiations with the Palestinian leadership, it should signal its aspirations of reaching an eventual peace agreement by empowering the pragmatic and Fatah-led forces in the Palestinian Authority. And it should encourage rather than undermine the U.S. and other regional and international stakeholders in doing the same.