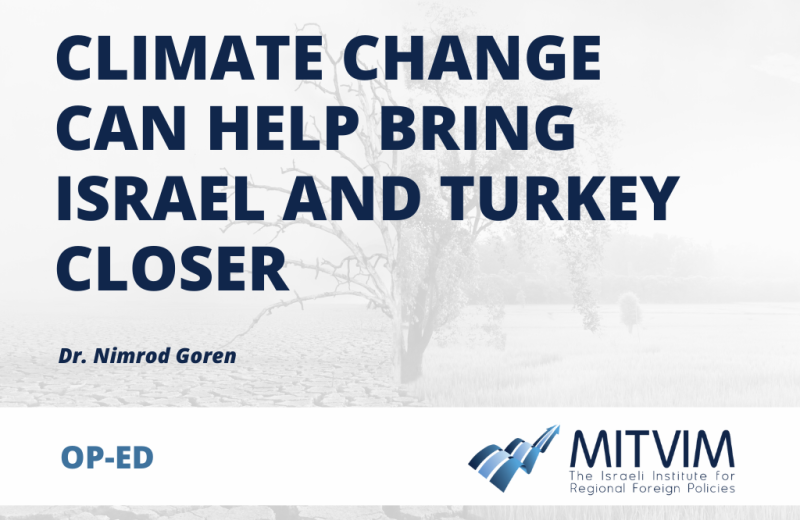 Israel and Turkey are starting a new chapter in their long-standing bilateral relationship. The mutual visits by Foreign Minister Çavuşoğlu’s to Israel (May 2022) and by Foreign Minister Lapid to Turkey (June 2022) followed up on the successful visit by President Herzog to Turkey (March 2022) and were positive steps in the gradual process of improving their relations. Towards the anticipated resumption of ties at ambassadorial level, the two countries have been engaged since mid-2021 in rebuilding trust, diversifying and deepening official dialogue channels, reenergizing cooperation in a way that brings tangible win-win benefits, and jointly confronting terror threats.

The warming of relations is expected to boost existing fields of cooperation (such as trade and tourism) and de-freeze those that were put on hold during years of tensions (such as the strategic dialogue on regional affairs). At the same time, it also creates an opportunity to launch new initiatives on issues that are relevant to current realities and needs. Climate change stands the on the top of this list. It is an issue of growing centrality both in Turkey and Israel, in which there is untapped potential for joint endeavors to take shape. For example, the Chargé d’Affaires of the Israeli embassy in Ankara, Irit Lillian, recently told Turkish media that cooperation in the field of sustainability could improve economic and trade ties between the two countries.

Climate change in Turkey: from neglect to hot topic

Climate change has already been taking a toll in Turkey, with fires, droughts, flooding and pollution in the Marmara Sea. More extreme climate events are expected in the coming decades alongside the intensification of current trends: warming, dehydration, damage to water sources, and rising sea levels.

However, until recently, Turkish President Recep Tayyip Erdoğan did not convey a sense of urgency regarding climate change. Among other things, he promoted the Istanbul Canal project, which is claimed to have negative environmental consequences, and was absent from the COP26 conference in Glasgow. However, Erdoğan devoted much of his 2021 speech to the UN General Assembly to climate change, calling for vigorous international action and emphasizing Turkey’s commitment to the issue.

In October 2021, Turkey ratified the Paris Convention, becoming the last G-20 country to do so. Since ratification, Turkey has reached an agreement with the World Bank, France and Germany to receive considerable financial assistance that will help it meet its treaty obligations. The country plans to reduce emissions by 21 percent by 2030 and reach zero emissions by 2053. With the support of the EU, a network of municipalities is operating in Turkey to deal with climate change. In late 2021, Turkey adopted a program called the “Green Development Revolution”. And in February 2022, a climate council was established, holding its first meeting in Konya, with government support and participation of representatives from all over the country.

Climate change is likely to assume a more central role in Turkey’s political discourse, as the upcoming presidential and parliamentary elections draw near. This because of the increased global spotlight on the issue, effects of climate change that are already felt in Turkey, the opposition’s criticism of Erdoğan’s handling of the issue, and his renewed focus and calls for action. In January 2022, opposition leader KemalKılıçdaroğlu addressed a letter to young Turkish citizens, pledging that the political bloc he heads would lead to real climate change and “work to save the ecological future of Turkey and the world.”

At the same time, Erdoğan is trying to rebrand himself from a leader criticized for ignoring the climate issue into a leader of innovative national environmental programs who urges the international community to act in a more just and effective manner. The approaching elections are likely to heighten his interest in developing climate-oriented cooperation with other countries, including Israel.

A dedicated bill and a special envoy: Israel wakes up to the call

In Israel, climate change is gradually becoming a high-priority issue. In recent years, civil society organizations were the ones taking a lead in educating the public, advancing policies and advocating for change. Governments were lagging, as was clearly spelled out in an October 2021 report by the State Comptroller on “National Climate Action by the Government of Israel”, which concluded that “Israel has yet to make the necessary perceptual shift to effectively deal with climate change”.

However, since taking office in June 2021, the current government has made several resolutions related to climate change and has set targets and actions for implementation. In May 2022, an important milestone was reached, with the approval in the government of a climate bill, championed by Environmental Protection Minister Tamar Zandberg.

Climate change is currently acknowledged in Israel as both a national security threat and an opportunity to develop regional cooperation with Muslim and Arab countries. For example. the security establishment is convening experts to finding paths to best address the climate-related security challenges. The Ministry of Foreign Affairs has appointed Ambassador Gideon Beharas a Special Envoy for Climate Change and Sustainability, a trilateral Israel-UAE-Jordan deal has been reached on the exchange of water and electricity, and President Isaac Herzog has established – shortly after being elected – the Israeli Climate Forum, which brings together all leading experts from multiple sectors to develop and advance joint initiatives and recommendations.

A foot into regional partnerships (ousted by old enmities)

President Herzog’s vision of a “renewed Middle East”, the activities of his Climate Forum, and his remarks – prior to visiting Ankara – about the need for a regional partnership to deal with climate change, are of interest to Turkey. This is partly since Turkey is not a member of the current regional frameworks in which Israel participates in the Mediterranean, e.g. the Eastern Mediterranean Gas Forum (EMGF) and the Cypriot governmental initiative to coordinate climate change activities in the Eastern Mediterranean and the Middle East. Turkey feels that these initiatives isolate it in the region and that they do not have real interest in its inclusion. A new Cypriot proposal to establish a regional framework to deal with summer wildfires has also been recently presented to Greece and Israel, but not to Turkey.

In Israel, there has been recent discussion of turning the EMGF into a forum dealing with renewable energies, or energy in general, and not only natural gas. This is a result of difficulties in profitable cooperation in the natural gas field and the increased importance of renewable energies. So far, the EMGF has yielded policy benefits for its member states and facilitated cooperation among them, but it has not yielded significant fruits regarding its original purpose – maximizing the profits of natural gas discoveries.

Each EMGF member has veto power over adding new members or observers. For example, the Palestinian Authority has torpedoed the United Arab Emirates’s request to be accepted as an observer in the forum. Turkey does not believe Greece and Cyprus would accept its membership. To a lesser extent, there is a similar Turkish perception about Egypt. Even if the Hellenic states were willing to include Turkey, Turkey would likely demand representation for Turkish-Cypriots as well, a condition that Cyprus and Greece are not expected to accept.

Out with the old, in with the new

For all the above-mentioned reasons, the idea of upgrading the EMGF into an inclusive regional framework also dedicated to environmental issues does not seem feasible at this stage. Establishment of a new forum, built from its onset as a partnership among all countries of the region, stands a better chance of success since it would not be perceived as directed against any regional actor. This could enable Turkey, Cyprus and Greece a measure of political flexibility, as has been the case with other regional frameworks that they joined upon establishment, such as the Union for the Mediterranean (UfM).

Such a move could be jump started with an Israeli-Turkish-Egyptian meeting on environmental and climate issues. This would have been considered impossible until recently, but it now appears more feasible given the cautious attempts by Egypt and Turkey to improve their relations. Israel can play a role in promoting such a meeting, albeit initially on an informal level, with a focus on promoting regional dialogue ahead of COP27 scheduled for late 2022 in Egypt.

Another new opportunity for regional cooperation on climate change issues is the parallel warming of relations between Israel and Turkey and Turkey and the UAE. From an economic point of view, trilateral projects are already reportedly being discussed, and an Israeli-Turkish-Emirati summit on environmental and climate issues can also be advanced. In this case, there is less sensitivity than there is with Egypt – especially in light of Erdoğan’s successful visit to the Emirates – and a gathering of officials from the three countries should be possible early on in the process.

Çavuşoğlu clearly stated that during his press conference with Israeli Foreign Minister Lapid, and environmental issues could be part of a positive agenda that serves the interests of all parties. Pro-peace Israeli ministers and MKs consider climate change as an important topic for Israeli-Palestinian cooperation, as was evident by Minister Zandberg’s meeting with her Palestinian counterpart in Ramallah, and by a special conference convened in the Knesset by MK Emilie Moatti.

Trilateral Israeli-Palestinian-Turkish cooperation on climate change can be encouraged, with the first step being a meeting of the three relevant ministers.

In addition to the regional aspects, Israel and Turkey should launch bilateral cooperation on climate change, which could include:

1) Convening a regular government-to-government annual meeting for strategic dialogue on climate and energy issues – alternating between Israel and Turkey.

3) Providing mutual assistance in the event of exceptional climate events (fires, flooding, etc.) and the launch of a climate hotline, preferably with participation of other Mediterranean countries. In the past, private entrepreneurs were the ones enabling cooperation on such issues, but with the warming of relations – the state apparatus should be the one taking the lead.

4) Linking Turkey’s Climate Council and the Israeli Climate Forum, in a way that enables joint events, initiatives, deliberations and sharing best practices. Leaders of the two entities can meet on a regular semi-annual basis, and a webinar for all participants could be organized, for mutual acquaintance, to learn about official and unofficial efforts conducted within each country to tackle climate change, and to discuss together pressing climate issues in the lead-up to COP27.

5) Creating a joint platform for civil society organizations from both countries that are interested in environmental projects and tackling climate change, possibly under the umbrella of the Turkish-Israeli Civil Society Forum.

6) Encouraging Israeli and Turkish companies to cooperate on climate-related CSR (Corporate Social Responsibility) and ESG (Environmental, Social and Governance) criteria, under the possible umbrella of the Israel-Turkey Business Council.

(7) Encouraging academic cooperation in the fields of environment and sustainability, which will include conferences, research as well as faculty and student exchanges. This could be done through the signing of Memorandum of Understandings between universities, exchange of students and staff via the EU’s Erasmus+ higher education mobility program, joint research projects through the Horizon Europe research and innovation program.

Climate change is already reshaping the international system, creating common interests, and fostering cooperation between countries that used to be at odds. Israel-Turkey relations stand to benefit from this trend. Tackling climate change can become a central pillar in a new chapter of relations, bringing benefits not only to the citizens of both countries, but potentially also to the region as a whole.