Is there room for Israel in the EU’s newly proposed political alliance? 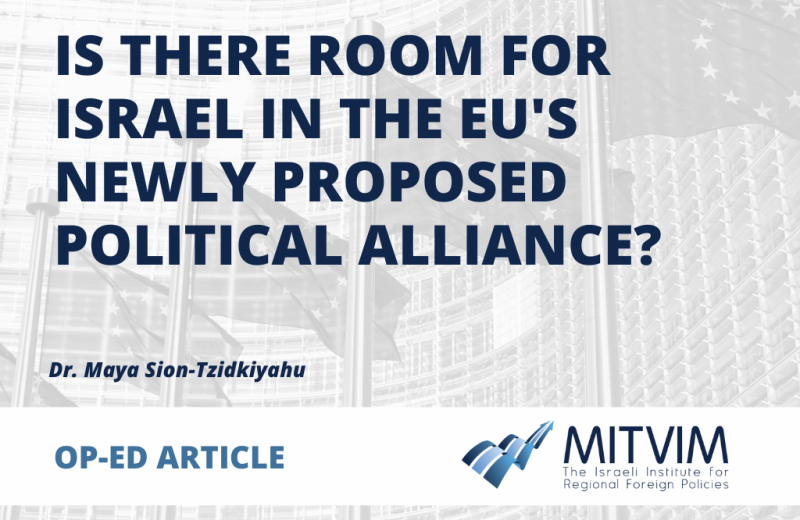 Prompted by the conflict in Ukraine, the EU is redefining its relations with the second tier of its friends and allies and examining which of them shares its democratic-liberal values.

At a festive meeting of the European Parliament in Strasbourg to mark Europe Day (May 9), French President Emmanuel Macron – in the tradition of French presidents before him – raised a new idea to establish a “European Political Community.” To European history aficionados, the term may sound familiar from the 1950s, when it emerged to complement the establishment of the European Defense Community. Had the initiative been accepted at the time, the six founders of the EU would have formed a community with federal characteristics.

Macron’s current proposal is far more modest. Instead of strengthening the union inwardly, it places great hope on strengthening ties with the democracies in its environs. Such a community would serve as a kind of “club” for countries that – although not members of the European Union – share its values: democracy, the rule of law and the protection of human rights. These values currently determine the European fault line in the war against Russia.

On the face of it, the proposal refers to a total of 12 countries: eight that want to join the EU (five in the Western Balkans, Ukraine, Moldova and Georgia), those uninterested in joining (Switzerland, Norway, Iceland), and those that left it (the UK, some would include Greenland). Turkey, which is no longer a candidate for accession, was not mentioned.

For the candidates, this political community would be a kind of “waiting room” during the protracted and difficult process involved in joining the EU. Macron estimated that it would take Ukraine many years or even decades to complete its accession. In the meantime, this community would allow its members to enjoy upgraded status and a political framework, including formally coordinated positions and responses to the needs of countries such as Ukraine, until they officially accede into the union. The community will enable stronger relationships with those left out, allowing them to enjoy some of the economies of scale of the EU without renouncing national autonomy.

ACCORDING TO the proposal, community leaders would meet several times a year (at various levels) to make decisions. Macron noted that the community would engage in political and security cooperation (not in defense), and in the fields of energy, transportation, investments, infrastructure and the movement of people, with an emphasis on youth. Its goal would be to contribute to the security, stability and prosperity of its members.

How would such a European political community affect Israel? Would Israel be accepted for membership? Macron set two conditions for accession: a European state, and one that is a liberal-democracy.

Israel is a liberal democracy that shares the values of the EU within the 1967 lines. Outside these lines, however, it violates international law, for example, by building settlements and transferring population to occupied territory. This criterion distances it from its moral affiliation with this community, which aims to serve as a clear buffer line vis-à-vis Russia.

Indeed, formulas have been found in previous agreements between Israel and the EU that have differentiated between Israel within the 1967 borders and beyond, but when it comes to building a forum of values, Israel’s policy in the Palestinian sphere constitutes an obstacle.

Regarding the extent of Israel’s European identity, opinions are divided. The majority would support the geographical approach that excludes the State of Israel from Europe. Indeed, Macron’s proposal refers to the “Eastern neighborhood” of the EU, in which, for example, Georgia is located east of the Black Sea, between Russia and the northeastern part of Turkey. His proposal does not relate to the “Southern neighborhood,” south and east of the Mediterranean Sea, with which the EU associates Israel.

A minority would support the identity-cultural approach, allowing for Israel to be defined, at least in part, as a European state. Significant parts of the “DNA” of the State of Israel and its citizens are comprised of European human, cultural, traditional, conceptual, governmental and even moral and normative components. By virtue of these identities, about 55% of Israelis are eligible for a European passport.

THE EU aligns itself with differing circles around it. These are not orderly concentric circles within each other, but rather a complex “variable geometry.” Some of these circles are closer to the EU, others more distant. The closest circle is the “European Economic Area” comprising Norway, Iceland and Liechtenstein, which participate in large parts of the European Common Market.

This circle is followed by Switzerland, with its complex system of some 120-140 agreements with the EU, which are also part of EU legislation. The outer circle is reserved for the European Neighborhood Policy, which consists of 16 countries, from Morocco in the southwest, along the Mediterranean coast, through Israel, to Georgia, Ukraine and Belarus in Eastern Europe. Of these EU neighbors – minus the countries that are candidates for accession – Israel has the greatest number of agreements and the deepest level of practical/functional ties with the EU.

Israel and the EU have extensive ties in the fields of economics, research and innovation, aviation and tourism, agriculture, regulation and standardization and more. The energy sector has also been added to the list with last week’s signing of a memorandum of understanding on gas exports from Israel via Egypt to the EU. The laying of a power cable connecting Israel, Cyprus and Greece (and Italy) is also under discussion.

Last week, the Israeli government voted unanimously to join the EU’s Creative Europe cultural program. Negotiations are underway on Israeli participation in other EU programs, too. In a wider European circle, Israel also recently signed its accession to the Council of Europe’s Convention on the Prevention of Human Trafficking, becoming the first non-European member of the Council of Europe to do so.

In recent weeks, a series of senior EU (and European) officials have visited Israel, reflecting its importance to the Europeans. The line of European officials queuing to visit Israel is long, forcing the Foreign Ministry to postpone some visits.

The highlight was the visit of President of the European Commission Ursula von der Leyen, the first such visit in a decade by a European Commission president. Waiting in line are Frans Timmermans, vice president and commissioner for Green Deal and climate change; and Margaritis Schinas, commissioner for promoting the European way of life (including oversight of the rule of law, immigration and security matters).

The European Council, which includes the heads of EU member states, will convene on June 23-24 to discuss Macron’s proposal to establish a European political community. The French are pressing for a decision on the matter by the end of the year.

If Macron’s proposal is accepted, should Israel apply for membership or would it be better off settling for observer status? Formal status in this community would constitute an important normative anchoring and an unequivocal statement about Israel’s membership in the community of liberal democracies, expressing values that the State of Israel aspires to project.

However, Israel is unlikely to apply because joining this political community would expose it to EU pressure on ending or managing the Israeli-Palestinian conflict. Given the currently complex political state of affairs, it is unclear whether there is a courageous or significant enough leader in Israel today to lead such a move.

Israel-EU
Prev
All Publications
Next