Holocaust denial still common in the Arab world, but views are changing 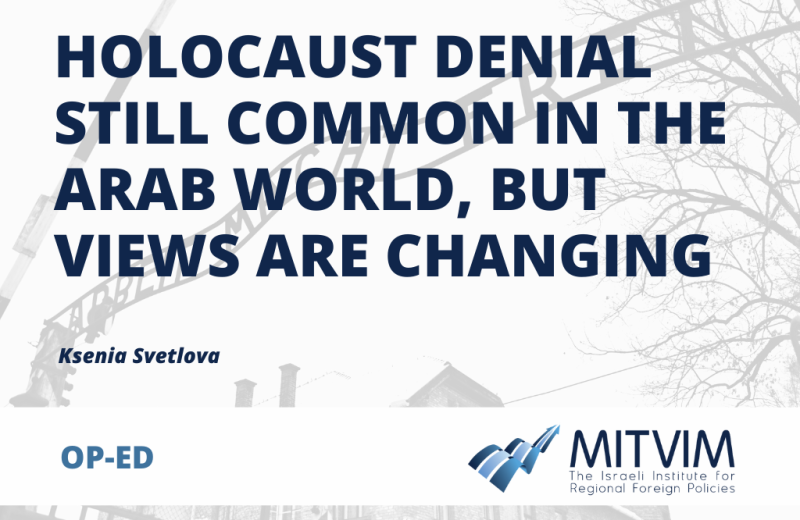 “I watched movies about Holocaust before, and I thought that generally, I have more knowledge about this issue than many in my society. But only when you come here, to Auschwitz, do you truly realize the dimensions of the horror. They tried to wipe out the whole nation,” said Anissa Naqrachi.

Naqrachi, a Moroccan woman who is president of the Amal Arab Group for the Elimination of Child Marriage (AAGEEM) and of the Nour Foundation for Solidarity with Rural Women (ANSFR), sounded deeply while speaking with The Media Line from Auschwitz.

She arrived in Poland on Wednesday to take part in the annual International March of the Living along with Arab participants from Saudi Arabia, Lebanon, Syria and other countries, as part of a delegation that was organized by Sharaka (“Partnership”), an Israeli-Emirati NGO established in 2020 to promote dialogue between Israel and the Arab world.

Almost a hundred Arab youth from Israel also took part in the March of the Living this year.

Until very recently talking about the Holocaust was practically taboo in the Arab-speaking world, where Shoah denial is still common. Sitcoms about the “fake Holocaust” have been hits in Egypt and Gulf countries, hundreds of books that denied the Nazi genocide were and still are sold in bookshops across the Arab world. In 2009, a quarter of Israeli Arab citizens denied the Holocaust, according to a survey carried out by the University of Haifa.

A quick search on Twitter and Facebook yields many thousands of results that link to Holocaust denial articles and many angry posts claiming that the extermination of six million Jews is not more than “another Jewish hoax, meant to extort the world.” Activists who tried to teach the Holocaust and organize visits of Palestinians and Israeli Arab citizens to Nazi death camps were condemned.

In March 2014, Professor Muhammad Dajani of Al-Quds University took a group of 27 students to Auschwitz. Upon their return Dajani was labeled a “collaborator” by Palestinian media and activists.

The situation appears to have changed in recent years, especially following the signing of the Abraham Accords normalization agreements.

Exploring the Holocaust in the Gulf

A year ago, a permanent Holocaust memorial exhibition, the first of its kind in the Arab world, opened in Dubai. The “We Remember” exhibition at the Crossroads of Civilizations Museum includes testimonies of survivors and photos and objects from that time.

This year Ahmed Obeid AlMansoori, the man who founded the exhibit and the museum, led a historic delegation from the United Arab Emirates in the March of the Living, along with Eitan Neishlos, the newly appointed ambassador of the International March of the Living in the Gulf states.

International Holocaust Remembrance Day this year was marked in many cities across the Arab world – from Manama to Abu Dhabi to Rabat. The US embassy in Cairo cosponsored the city’s first-ever official Holocaust commemoration.

In 2020, Muhammad al-Issa, the secretary-general of the World Muslim League, led a delegation to Auschwitz composed of Muslim religious leaders who repeated the words “Never again” and performed a prayer for the six million Jewish victims.

“I believe that there is a gradual change, the rhetoric of the Abraham Accords. To many in the region the whole story today looks different, no more sharp dichotomy between Jews and Arabs, Shia and Sunni, but rather a win-win situation,” Dr. Nir Boms, a research fellow at the Moshe Dayan Center at Tel Aviv University, and the coordinator of the TAU

Workshop on Israel and the Middle East and the Hiwar Forum for Intra-Regional Dialogue, told The Media Line.

“We are here in Poland, surrounded by three million Ukrainian refugees who can be seen everywhere. It is another powerful reminder of why we are here,” Boms continued.

“We are all acute observers of our own history. Our region has seen much hate and lives were taken and are being taken easily still. It is up to us to bring some understanding and tolerance as an alternative. This message is our lesson from the March of the Living. It is the most important legacy we can carry from here,” he said.

The Arab sector in Israel: Holocaust education and empathy are key

Despite the impressive representation of Arab youth from Israel at the March of the Living, Colette Avital, chairperson of the Center Organizations of Holocaust Survivors in Israel umbrella organization, a Holocaust survivor and a former Israel Knesset member, believes that for now there is no significant change in studying and understanding the Holocaust in the Arab sector in Israel.

“I know that there are many initiatives abroad. Project Aladdin is doing a great job [countering Holocaust denial] in the wider Middle East. But here in Israel, it’s tough,” she told The Media Line.

“And the problem is certainly not only among Israeli Arab citizens who don’t stand in silence during the siren [on Israel’s Holocaust Remembrance Day]. Many people have different reasons why not to stand up. Some say that it’s merely an Ashkenazi issue, that it doesn’t concern them and unfortunately, for many Arabs, it is still something very foreign,” Avital said.

Jalal Banna, a columnist and an expert on Arab affairs, said the State of Israel doesn’t do enough to promote understanding of the Holocaust among Arabs.

“The Holocaust is a human issue, not only Jewish and certainly not only Israeli. Yet the State of Israel appropriates the issue almost entirely and thereby creates antagonism,” Banna told The Media Line.

“The Arabs in Israel are first exposed to the Holocaust in high school; it is a part of the curriculum. But it is not presented as a significant historical event, one of the cruelest and most awful in history. It seems that those who wrote this curriculum just wanted to be done with it, to check off a box,” he said.

“It also seems that they were afraid to evoke emotion and empathy among the Arab students, fearing that someday –without making comparisons and parallels – these students will also demand some empathy and solidarity with their pain,” Banna said.

The situation in the Palestinian Authority is even worse since the textbooks do not include any mention of the Holocaust. However, in social networks, the word is often used in the context of denial or fake news.

Despite the positive changes taking place in some Arab countries today, Israel, the Yad Vashem memorial and other organizations still have a lot of work to do to explain, show and teach the Holocaust, not far from home, but in Israel, and in the PA.