To the Middle East and beyond! Israel’s new connectivity 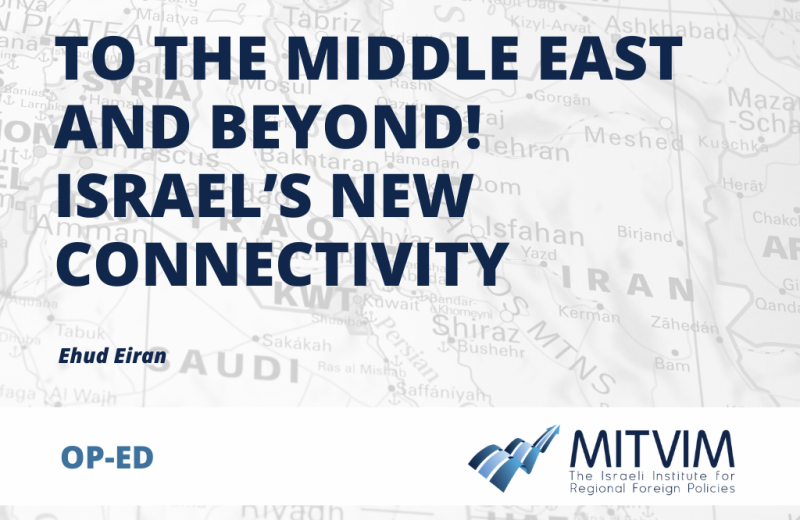 After decades of limited contact, Israel is connecting with its region at the strategic level. It seems safe to assume that more is yet to come.

Largely rejected by its neighbors for decades, Israel accepted its separateness; a “villa in the jungle” according to former Prime Minister Ehud Barak, or an “island state” to use Foreign Minister Yair Lapid’s framing. Even the peace accords with Egypt (1979) and Jordan (1994), as well as a short period of formal and open relations with a few other Arabs states in the 1990s, did not alter this reality. The flow of goods, people, and ideas between Israel and its neighbors remained nonexistent for decades. Israel was always an endpoint—a spoke—but never a hub or a place of transit; indicatively, as late as 2003, Israel’s main international airport did not have any infrastructure for transit passengers.

There were, of course, some breaches in the great wall between Israel and the region. In some cases, Israeli and moderate Arab leaders (in countries which did not have formal relations with Israel) communicated “under the table” (often a crowded place in Middle Eastern affairs) and, at times, openly. There was certainly intelligence sharing, even military assistance in some cases, and significant, albeit clandestine, levels of trade with the Gulf states, despite the prohibitions of the Arab boycott. Even Iranian goods ended up in the Israeli market, and vice versa, despite the Israeli law that disallowed “trade with the enemy.” A trickle of Israeli tourists did visit Jordan and Egypt after both countries signed peace accords with Israel, but even congressional incentives to encourage Israeli–Egyptian and Israeli–Jordanian joint business ventures (QIZs) could not produce intensive economic contacts.

Against this dismal background, the last few years, especially since the 2020 Abraham Accords, saw Israel connecting to the region as never before. The formal relations with Bahrain, the United Arab Emirates, and Morocco led to an unprecedented flow between Israel and the three nations: national, military-to-military, and civil society agreements for cooperation, massive tourism (which in Morocco was significant even before the agreements), and multiple business and cultural interactions all took shape and left their mark despite the constraints of the pandemic. Even countries that did not “go formal” with Israel are helping to connect it to the region: Since 2020, Saudi Arabia has been allowing Israeli air traffic over its territory, after decades of blocking it.

Connectivity also evolved on Israel’s Western flank. The Mediterranean Sea, once an afterthought in Israeli strategic thinking, turned out to be an important space for new connections. Israeli gas from the sea is exported to Egypt and Jordan, and the three nations together with Greece, Cyprus, Italy, and the Palestinian Authority launched in 2019 a new regional organization, the East Mediterranean Gas Forum (EMGF), which in 2021 was joined by France (with the US as an observer) and recognized as a regional compact by the UN. Gas is also one of the cornerstones for an Israel–Greece alignment that involves a wide spectrum of exchanges from education to security. This alignment also has an aspect of foreign direct investments: A Greek company owns some of the Israeli gas fields, and an Israeli company is part owner of a Cypriot field. The three nations have ambitious energy connectivity visions: laying a pipe that would connect Israeli and Cypriot gas to Europe, or—as the US now suggests—an electricity project that would connect their grids to Europe, aptly named the EuroAsia Interconnector (a similar cable now connects Algeria with Southwestern Europe).

Israel now serves as a transit hub  as well. For the past decade, Turkish trucks have been shipped to the port of Haifa and then driven through Israel to Jordan and to Iraq, since the more direct land route between Turkey and the two Arab nations became blocked by the fighting in Syria and related disruptions in northern Iraq. Israel and the UAE agreed that Emirati oil is to be piped from Israel’s Red Sea port of Eilat to its port on the Mediterranean near Ashkelon (using a pipeline originally designed to carry Iranian crude). Finally, the Chinese were looking into developing a train line on a similar Red–Med route to serve as an alternative route to the portion of the Belt and Road initiative (BRI) that goes through the Suez Canal.

Encouraged by this opening, planners are already offering even more ambitious connectivity visions. In 2017, Israel’s Minister of Transportation Israel Katz proposed “tracks for peace,” the development of an advanced train network that would connect Israel to Saudi Arabia. Katz also proposed the development of an artificial island that would serve the Gaza Strip, as others floated an idea for an offshore international airport for Israel and a new pipeline that would deliver Israeli gas to the Gaza Strip.

This new reality is, in fact, a “back to the future” moment. After all, the land is dotted with postmarks attesting to the centrality of connectivity in its history. Prehistoric sites in Israel, offer glimpses into 1.5 million years of early human migrations out of Africa via the Levantine corridor into Eurasia. Later, ancient traders (dating back at least to the Bronze age, some 3,500 years ago) passed through the land on two ancient routes: Via Maris and the King’s Road. In the 13th century, the Mamluk Sultanate created the postal road, a vital artery of communication that stretched between Cairo and Damascus. The 20th century introduced modern forms of connectivity. Indeed, the “tracks for peace” initiative echoes older times. In the early 20th century, the Ottomans—who ruled over an open and connected Middle East—laid the tracks for the Hijaz train, which ran from Damascus to Medina, with a small offshoot to the now Israeli port cities of Akko and Haifa. By 1934 oil was piped from British-controlled Iraq to British-controlled Israel/Palestine, processed in the port city of Haifa, and exported to markets away from the region.

Connectivity was not confined to the transport of goods. In its day, it not only economic interactions but also ideational and human ones. Christianity was born out of a small Jewish sect in Israel/Palestine, and traveled far, becoming the dominant religion and culture by the middle of the first millennium in Europe.

Even local products carried the vernacular. Jaffa became nearly synonymous with oranges. As for gauze, the thin fabric now mostly used for medical dressing, it took its name from the Israel/Palestine region where it emanates: Gaza.

As late as the 1940s, the region was more integrated.  The Israeli construction company Solel Boneh operated in Iraq, Egypt, the Emirate of Transjordan, and even Bahrain. Jews from Palestine sought educational opportunities in the region. Russian-born Eliahu Eilat, Israel’s first ambassador to the US and later the president of the Hebrew University in Jerusalem, was a graduate of the American University of Beirut. European Jews who sought to immigrate to Palestine in the late 19th century, ended up in the larger centers in Egypt, such as Cairo and Alexandria, integrating into business and social life. Leia Nadler, the daughter of an Egyptian (Jewish-Romanian born) candy magnate family, married Boutros Boutros-Ghali, the famous Egyptian diplomat and former secretary-general of the UN. From today’s perspective, the old epithet “Levantine” has become a badge of honor, not an insult

These lessons of the past are encouraging. Connectivity offers multiple economic opportunities, as trade, energy, and people pass through the land. Past “connectors,” such as the Mamluks developed significant infrastructure in the 13th century to support their “postal road.” Two of the bridges that were built for this purpose, in Lod and in Yavne, still served local transport needs well into the 21st century, over 700 years after they were built. Being a connector also strengthens one’s status, as it creates leverage vis-à-vis the parties that are interested in the flow of goods. Connections can also create economic interdependence, thus decreasing the chances for violence between these former foes.

But the new connectivity comes with costs. Energy connectors can damage the environment. Indeed, despite the obvious geostrategic gains, Israeli activists warned against the delivery of oil from Israel’s Red Sea shore to its Mediterranean shore on account of the increased environmental risk. Their plea was heard, and for now, the Israeli Ministry for Environmental Protection is trying to stop the Israel–UAE oil connectivity deal.

Connectivity had also become a competitive arena in the great power’s strategic rivalry. The US perceives Beijing’s Belt and Road Initiative as threatening to American global interests. Even if the construction of a Chinese rail in Israel would serve the latter’s economic interests, the securitization of connectivity may limit Jerusalem’s ability to move ahead as Washington is expected to oppose the move.

Looking into the future, the new connectivity raises at least three questions. First, how durable is it? As history shows, the area went through periods in which it was connected to the region, and moments in which it retreated inward. At times, leaders displayed both tendencies, by shaping the connectivity they desired. As noted, the Mamluks built an impressive ground route through the territory, but also took special care to destroy all ports on the Mediterranean, lest Western invaders would come again, like the Crusaders did on ships from Europe.

Second, how will this new connectivity affect Israel’s relations with its immediate Arab neighbors? Much of what was described above takes place between Israel and the Mediterranean states, and Israel and the Gulf and North African states. Can these new relations make Israel closer, more accepted, by the Egyptians and Jordanians, and maybe later by the Lebanese and Syrians? One glimpse of how this could unfold was the 2021 deal between Israel and Jordan with the UAE’s financing, for a solar powered desalinated water swap between the first two nations.

Finally, will the new connectivity affect Israel’s identity? Over the years, Israel developed a unique identity that mostly does not correspond with the characteristics of the region. Among its core aspects are a close cultural, political, and economic connection to Europe and North America, and a set of political institutions and norms that draw both on Judaism and democracy. Israel also defines itself as the nation-state of the Jewish people. With some half of the Jewish world residing in North America and Europe, Israel was bound to look West, not East.

The new connectivity bears with it the promise of change. It offers a more inclusive framework for engaging with a region that once rejected Israel. Trade, tourism, and investment will lead to greater interaction, educational exchanges, and the flow of ideas and people. Growing numbers of Israelis are now retiring to cheaper (and close-by) locations in Cyprus and Greece, while some Israeli businessmen are seeking residency in the UAE to avoid the heavy taxation at home. One appealing framework that has yet to take hold in Israel is its redefinition as a Mediterranean country: a liminal identity that offers a commonality between Christian-European nations such as Cyprus, Arab Muslim nations such as Egypt and Morocco, and the Jewish state. At a deeper symbolic level, such an identity could focus less on Israel’s specific locality and the weight of association with its holy sites, and more on mobility, movement, and exchange. Some Israelis think it is the only way ahead. Author AB Yehoshua wrote in 2014 that if Israel “wants to ensure itself a lasting existence . . . it must find a path of renewal by deepening its Mediterranean identity.”

Over the generations, Jews were highly effective in rising to the challenge of reshaping their identity. Will regional connectivity usher, not only riches and maybe security, but also a new ideational reincarnation?

This article is from “JSTribune“, from May 2022