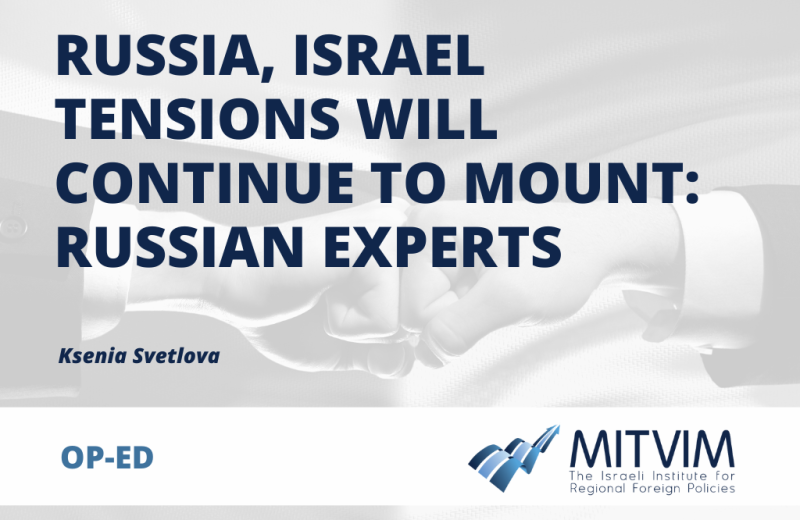 After Foreign Minister Sergey Lavrov made statements about “Hitler’s Jewish blood” and blamed the Jews for being “the worst antisemites,” the verbal and written exchange between Israel and Russia quickly escalated.

Russian President Vladimir Putin, who for years maintained close ties with Israel, hasn’t yet reacted to this public row. However, even before Lavrov’s statements, the tensions between Moscow and Jerusalem were mounting.

Just last week, Israeli Ambassador to Russia Alexander Ben Zvi was summoned to the Foreign Ministry on Smolenskaya Square after Michael Brodsky, Israel’s ambassador to Ukraine, suggested that a few streets in Kyiv be renamed after righteous Ukrainians who saved Jews during the Holocaust. Before that incident, Russia strongly rebuked Lapid for denouncing the Russian war crimes in Ukraine and voting to expel Russia from the UN Human Rights Council.

For the last few months, Israel has remained one of the few Western countries that didn’t impose sanctions on Russia and refrained from selling weapons to Ukraine. Bennett, unlike Lapid, never publicly condemned Russia for launching a war in Ukraine.

On Wednesday, Valentina Matviyenko, the chairwoman of the Federation Council of the Russian Federation, sent a conciliatory letter to Knesset Speaker Mickey Levy, in which Lavrov’s recent scandalous statements are mildly refuted. But no formal apologies from Lavrov have followed so far.

How will Israel’s balancing act be affected by the recent row over Lavrov’s statements, and what are the chances that Russia will settle the score with Israel in Syria, Iran, or Gaza?

During the last few weeks, while relations between Israel and Russia became tenser, the volume of communication between Moscow and various Palestinian factions kept growing. First, there was a call between Putin and Palestinian Authority President Mahmoud Abbas, then Lavrov initiated a conversation with senior Hamas leader Ismail Haniyeh. On Wednesday, a Hamas delegation led by veteran leader Musa Abu Marzouk paid a visit to Moscow.

For the last few years, the Palestinian-Israeli conflict has not been at the center of Russian attention. What are the chances that Moscow will leverage its relations with Fatah – the ruling party in the PA – or Hamas now that its irritation with Israel is growing and the situation in Gaza, the West Bank, and east Jerusalem is volatile?

Abbas Gallyamov, an independent political analyst and a former speechwriter for Putin, believes that initially there was no plan to undermine relations with Israel.

“Lavrov could issue an apology after that incident, and that would be the end of it. But the Kremlin’s political style is based on a criminal logic – they are always right, and owning a mistake, recognizing that a mistake was made, is a sign of weakness,” he told The Media Line.

“If Israel insists on its position and Russia fiercely defends its views, there is a potential for deterioration of relations. Moscow might activate Iran, Syria, or Hamas – without considering the outcome. That’s the problem: Putin never considers or evaluates the consequences. He is eager to join any fight in order to come out as the winner,” Gallyamov said.

Ever since the beginning of Russian involvement in Syria, Israel has been wary of issuing any criticism directed at Moscow, fearing the Kremlin might choose to retaliate and object more fiercely to Israeli military activity over Syrian skies.

Alexander Baunov, a Russian political analyst who previously served as a diplomat and a senior fellow at the Carnegie Moscow Center think tank that was forced to close last month, told The Media Line that under current conditions, while Russia is engaged in warfare in Ukraine, “a change of course in Syria will not come without costs.

“I can imagine that in the case of escalation Russia might rethink its policy on Israel’s activity in Syrian skies and try to prevent Israel from taking some forms of actions there. However, it seems to me that the Russian military machine is not up to it right now. In this case, they would need to beef up security in Syria, while currently, Russia is actually moving some forces from Syria to the front in Ukraine,” Baunov said.

Gallyamov suggests that Russia would also have a lot to lose from the deterioration of relations with Israel over Syria.

“Israel’s security interests in Syria are known, and it has a lot to lose. But Russia could also lose in this arena, yet it acts as if this kind of scenario is impossible. As a matter of fact, Russia is also vulnerable; its weapon systems – as we can now see – are less than perfect,” he said.

“Theoretically, Russia should not be interested in increasing the number of its enemies, but still, its logic, which originated in the criminal showdown of the ’90s [when after the breakup of the USSR the country was on the verge of collapse] doesn’t allow it to show weakness. It acts as a spoiler – and a spoiler is never a leader. By the way, if Israel would change its policy on Russia despite its fears regarding Russian activity in Syria, it might be well appreciated by the US,” Gallyamov said.

According to Baunov, since the beginning of the invasion of Ukraine, the division between the West and the “non-West” has become clearer.

“The leadership [in Moscow] had labeled itself as a vanguard of the non-West that wages a war against the West. Israel is definitely a part of the Western world, and when it has to make a choice, it will choose the West. At the same time, the Iranians and some Arabs are not affiliated with the West. The dichotomy is clear, and that’s why Russia might now lean more toward these non-Western actors than toward Israel,” the expert said.

Despite some reports in Israeli newspapers, it’s still premature to conclude that Israel will break its taboo and sell state-of-the-art weapons to Ukraine. How would Russia react if that happens?

“They don’t focus on the consequences. What will happen if Israel starts to supply the Ukrainians with the Iron Dome? They are chasing away this thought. And the Iron Dome might be this one last straw that will change the course of events in Ukraine,” said Gallyamov, who, like many experts, is confident that Israel’s Iron Dome air defense system might be a game-changer in Ukraine.

At the same time, Israel is worried that Russia might supply advanced weapon systems to Iran, especially if the Islamic Republic returns to the nuclear agreement with the US and is relieved of some sanctions.

While the current incident with Lavrov’s scandalous statements is far from being over, additional events may soon cast a shadow over the already tense relationship.

Many cities in Israel have canceled the May 9 Victory Day observations celebrating the Soviet Union’s victory over Nazi Germany – a particularly sensitive issue for Moscow − and the fate of the Alexander Nevsky Church in Jerusalem, whose ownership Russia is demanding, is still undecided.

What is clear is that the distance between the two countries, which traditionally have belonged to different camps, will grow and the tensions will continue to mount, further destabilizing the Middle East.