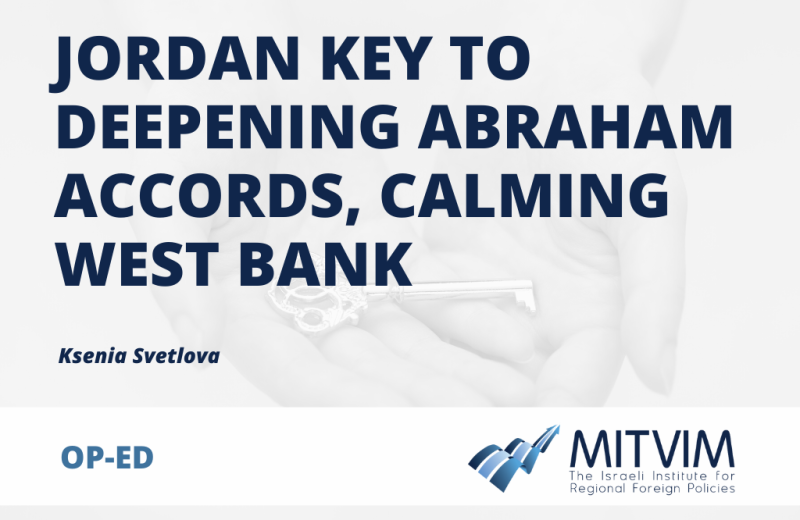 Israelis and Jordanians no longer hide their willingness to cooperate, but King Abdullah’s complex internal situation and mounting tensions at Al-Aqsa Mosque may impede rapprochement.

Relations between Israel and Jordan have experienced a rebirth over the past year. After the exit from office of former Israeli Prime Minister Binyamin Netanyahu, under whose leadership relations with the Hashemite monarchy were strained and sometimes hostile, the two sides have rediscovered each other, like a couple that falls in love again after years of mutual acrimony. The Jordanians no longer hide their willingness to cooperate with Israel on a variety of topics, such as a joint food program, renewable energy, the struggle against radical Islam, preventing arms smuggling, and stabilizing the Palestinian territories.

The reciprocal effects of Jerusalem’s renewed relationship with Amman and its new ties with the normalization states remain to be seen. This is an important aspect of the normalization process because a significant connection to Jordan gives the Abraham Accords geopolitical depth. However, the situation in Jordan is complex. King Abdullah avoided sending his foreign minister to the Negev Summit in March to avoid antagonizing domestic opponents. Instead, he headed to Ramallah to calm simmering unrest there. Israel understood his decision.

Israel values Abdullah’s mediation because Jordan is the custodian of Jerusalem’s Muslim holy sites. Both sides hoped that quiet diplomacy in Amman would prevent violence around Al Aqsa Mosque and in the West Bank during Ramadan, Passover, and Easter.

Last year, when violence erupted around Al Aqsa, thousands of Jordanians took to the streets (some reaching the Israeli border) and demanded that their government sever diplomatic relations with Israel. The king did not surrender but he is clearly concerned about the deterioration of the security situation in the Palestinian territories. Senior Jordanian and Israeli officials held many meetings in a bid to forge understanding and cooperation and prevent further upheaval.

This year, the violence again quickly escalated at Al-Aqsa; despite improved relations, Jordanians harshly criticized Israel for allowing the upheaval. The parliament demanded the expulsion of Israel’s ambassador and demonstrators in Amman called for breaking ties with Israel. Jordanian officials made highly critical statements to appease the protestors. But all sides understood that when the situation in Jerusalem will be back to normal, bilateral cooperation will be back on track.

Just three years ago, when then-US President Donald Trump unveiled his “deal of the century,” Jordanians felt cheated and excluded. In their view, Israel had hatched a plot against them with US cooperation. News spread that under the plan, control of the holy sites would pass from Jordan to Saudi Arabia. Then came the Abraham Accords. The Jordanians were not thrilled. They feared that the kingdom’s special position as a bridge between Israel and the Arab world was being eroded and that the agreements could harm both the Palestinians and them.

Unlike Israel’s new partners – the United Arab Emirates, Bahrain, and Morocco – Jordan is unable to disconnect from events in the West Bank. The shared history, family ties, involvement in internal politics, and the issue of the Muslim holy places bind together the Jordanians and Palestinians. Upheaval in Al-Aqsa, a regime change in Ramallah, or any other shock would damage the Hashemite monarchy but would hardly be felt in the Gulf region. This is where the main difference lies between the Jordanian and Gulf states’ attitudes toward Israel.

The changing of the guard at the White House and in the Israeli Prime Minister’s Office offered an opportunity for enhanced, coordinated conduct of Israel, Jordan, the Palestinians, and the Gulf states. Israel improved its relationship with Amman, sought to ease the distrust between the two sides, and displayed an unusual willingness to cooperate. Simultaneously, for the first time since the signing of the Abraham Accords, Israel is allowing Jordan to enjoy the fruits of normalization by promoting economic projects that pay off for all parties. Thus, in November 2021, Israel, Jordan, and the UAE signed a trilateral agreement in which Israel would purchase 600 megawatts of “green” electricity from the Jordanians (produced with Emirati assistance) and in return would consider the export of 200 million cubic meters of desalinated water to Jordan.

Once the hackneyed, damaging slogan “Jordan is Palestine” was no longer being heard in Jerusalem or Washington, Jordan renewed its status as an important partner of the US in the fight against radical Islam. US President Joe Biden even transferred a US military base from Qatar to Jordan. And a positive change occurred in Amman toward the Abraham Accords and the possibility of upgrading cooperation with Israel. Had Israel focused solely on promoting relations with its three new partners, it would have excluded Jordan and Egypt, advancing the accords within a vacuum, disconnected from a complex regional reality in which developments are intertwined.

Embracing the Jordanians has great significance for easing Palestinian unrest. The dire economic situation in Jordan corresponds with the deterioration of security in the Palestinian territories. The smuggling of weapons from Jordan is also related to the activities of radical Islamic organizations on both sides of the border. Israel must continue to bring Jordan closer and work with it to calm the region and improve the situation in the PA. In this context, signatories of the Abraham Accords can play an important role in driving economic processes with Israel in Jordan and the PA. Jordan is a critical connection between the regional normalization process and the Palestinian sphere. Prosperity and flourishing of Israeli-Arab relations in the Gulf and North Africa must also benefit the Palestinians.

The romance between Israel and Jordan must not be allowed to die out. Israeli politicians are enthusiastic about immediate gains deriving from the improved ties and are less aware of the Sisyphean work of diplomats and intermediaries, carried out without fanfare. Amman is also looking at the political upheaval rocking the Bennett-Lapid government and hoping the storm will not damage the delicate fabric of relations created over the past year. At the same time, the political and economic embrace of Jordan cannot lead to long-term, stable results without a change in the hostile Jordanian public attitude toward Israel. Despite the great political warming, at the level of civil society – in Jordan and the Palestinian Authority – relations with Israel remain frozen. Hostility remains intact and has perhaps even grown.

Israel, Jordan, and the Palestinian Authority must consider this. The stability and resilience of relations also depend on the ability to change the public narrative in Jordan itself. As political relations flourish while the backyard burns with rage, prospects of an internal explosion increase. Intergenerational change also makes the issue urgent. While the older generation of Palestinians and Jordanians is working to preserve the status quo, the younger generation has given up and moved into a more hostile, combative position. Only significant progress in the political field vis-à-vis the Palestinians and confidence-building measures could improve the atmosphere on both sides of the Jordan River.