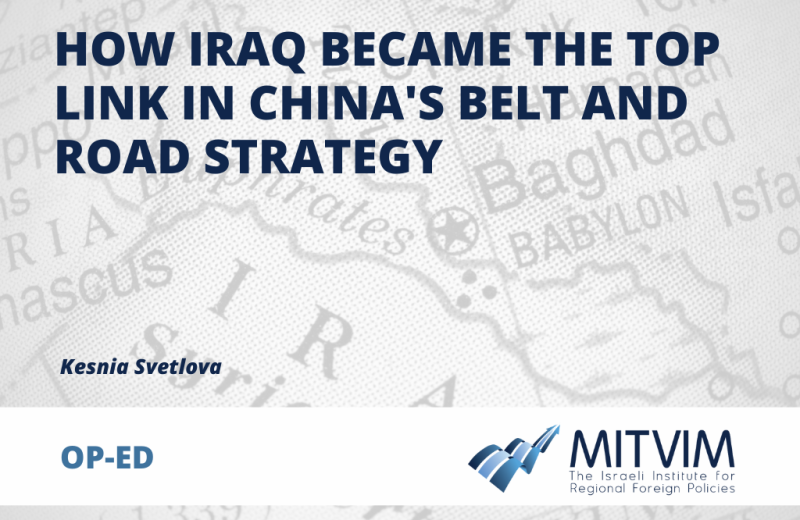 Last year, Iraq became a top recipient of Chinese investment and a key link in Beijing’s Belt and Road initiative. Almost 20 years after the war in Iraq began, billions of Chinese yuan are being invested in assorted projects, from green energy capabilities and heavy oil plants to building roads and schools. What role does Iraq play in China’s “Belt and Road” strategy and how does this development affect the big power competition in the Middle East?

In Tehran last March, the Chinese and Iranian foreign ministers signed a 25-year cooperation agreement (a “Comprehensive Strategic Partnership”). Under the accord, Beijing promised to invest $400 billion in Iran’s economy in exchange for a steady and heavily discounted supply of oil.

This agreement and its implications for global security and economy were widely discussed back then. But as 2021 neared its end it became clear that Iran’s neighbor and ex-nemesis Iraq was the real star of the Chinese Belt and Road strategy in the Middle East.

According to a report from Fudan University’s Center for Green Finance and Development in Shanghai, last year Iraq received $10.5 billion in investment under the Belt and Road infrastructure initiative. Iraq has become the third-biggest Belt and Road partner in energy engagement, after Russia and Pakistan. Overall Chinese investment in Arab and Middle Eastern countries rose by about 360% in 2021, while construction engagement increased by 116%, compared to 2020, the study said.

Nowadays China is involved in the building of Al-Khairat heavy oil power plant near Karbala. It took the promise to finance construction of 1,000 schools (and some 7,000 schools in the future) in return for oil products to secure the Al-Khairat deal. China’s state company also won the contract to develop the Mansuriya gas field and there is no shortage of other industrial and civil projects.

“I’m a bit surprised by the fact that Iraq is now the third-largest BRI [Belt and Road Initiative] country since China has a great deal of attention and money invested in Kazakhstan, it is very focused on Central Asia, it conducts business in Egypt and builds cities there,” Carice Witte, the founder and executive director at SIGNAL – Sino-Israel Global Network & Academic Leadership, told The Media Line.

“In my opinion, Iraq being the third-largest BRI country says a number of things: first of all, that Iraq is a less controversial investment than Iran, that it has a great deal of untapped potential and easier access than Iran. And also, that the Iraqi government and people are easier to negotiate with and to do business with than Iranians,” she continued.

“The Chinese have always found it extremely difficult to do business with Iran and there is a lot of unpublicized tension in Iran-China relations. Due to China’s dependence on Saudi and Gulf energy, they feel it’s important to cultivate another significant source of oil. Iraq is a very young market that needs to grow, needs everything and has a way to pay for it (unlike Syria which has limited oil reserves and Lebanon which has none). When you think about it, Iraq is the ideal venue for China in the Middle East,” Witte said.

After 20 years of US presence, it’s China that delivers the goods

The Iraq-China relationship dates to when Beijing was selling Baghdad weapons in the 1960s and 1970s while Iraq supported its claim to a seat on the UN Security Council. Relations developed further during the 2000s, after Saddam Hussein’s regime was toppled. China, along with Russia, was fiercely opposed to the Iraq War, yet it became one of its main beneficiaries.

In 2008, the China National Petroleum Corporation signed a huge production deal with the Iraqi government and became the first foreign firm to do so since the war. In 2013, China bought almost half of Iraqi oil production. During these years Iraq acquired Chinese drones to fight ISIS, supported the Hong Kong national security law at the UN and defended China’s treatment of Muslims in Xinjiang.

Witte explained that since Iraq’s hopes to see America more involved and supportive of its development didn’t materialize, it is looking for deeds, not words.

“There was a time of excitement about the potential of American support for Iraq, and during that time the plans for cooperation with China were stalled. China is patient and it is able to wait until a new opportunity presents itself,” the expert said.

“And after watching the US behavior in the Middle East over the last few years, the reality sank in that the US cannot necessarily be counted on. America wants to give, but not to do. It gives money, but it doesn’t go and improve the situation of the locals. That’s why we have Chinese everywhere – because the Americans don’t do the work anymore,” Witte said.

Eric Davis, professor of political science at Rutgers University and former director of its Center for Middle Eastern Studies, recently tweeted, “When the United States asks why China has become a stronger global power, you should realize that China plays a strong role in investing in developing countries like Iraq. China is investing in the natural gas and solar energy industries in Iraq and is building an airport. Where are the American investments?”

Not all Iraqis are happy with these developments, just as not all Iranians welcomed the 25-year cooperation agreement signed with China.

Former MP Ghaleb Muhammad Ali wrote in his social media accounts that while China imports crude oil at the price of $70 per barrel, Iraq imports the same volume of Chinese gasoline for $200, indicating that Beijing is getting the better of this cooperation.

Dr. Ronen Zeidel, an Iraq specialist at the Tel Aviv-based Moshe Dayan Center for Middle Eastern and African Studies, said, “On one hand, the Iraqis are highly engaged with the Chinese. They let them access the Iraqi oil market and the Chinese promised to build schools and other infrastructure. Schools are very important since there are plenty of schools in horrible condition and it’s something that is highly discussed in Iraq.

“However, many are also afraid of the barter principle – exchanging their oil for infrastructure, like in Africa. Opponents of Iran fear that pro-Iranian militias’ violence also has something to do with Chinese involvement. They even call it “the Silk Road Axis,” Zeidel said.

Since the 25-year cooperation agreement was signed last year, Iran has seen a few anti-Chinese protests. Demonstrations were staged near parliament where the protesters chanted slogans such as “Iran is Not for Sale” and “Death to Those Who Sell the Homeland.”

Nothing of the kind has taken place in Iraq, where, according to Zeidel, the physical presence of China is not as widespread as in Africa or some parts of Europe. “Iraqis are both drawn to China, since they want their country to develop, and afraid of it,” he said.

The experts are certain that cooperation between China and Iraq will keep growing in 2022, even if the volume of investment does not expand.

Will Chinese involvement contribute to stabilization of the situation in and around Iraq? Some believe this will be the case, due to Chinese concern over disruption of oil supplies. For now, it’s clear China is slowly but surely building its position in the Middle East and that this new reality will affect the global power competition worldwide.

The op-ed was published on JPost in February 2022.

Middle East
Prev
All Publications
Next