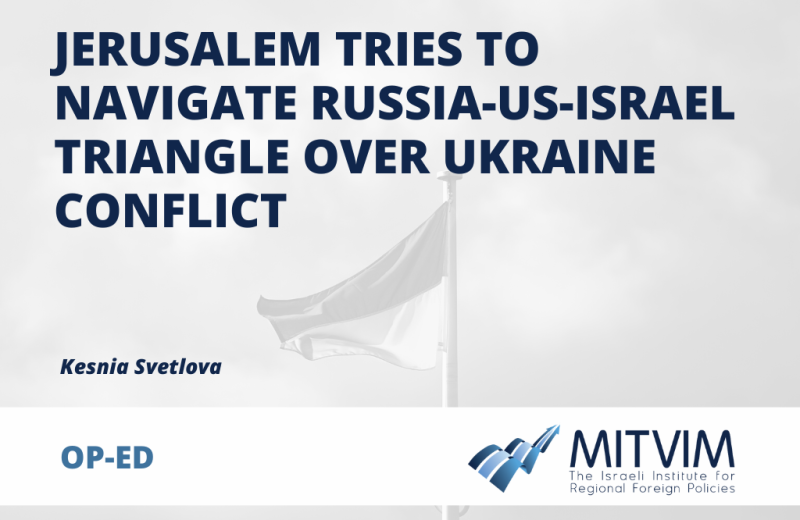 The war clouds over Ukraine grow ever darker as Russian forces amass on the borders, on three sides, and Western media speculate on when exactly “D-Day” will come.

Western diplomats are leaving and foreign governments, including Israel, are urgently calling on their citizens to come home, to the frustration of Ukrainians, who believe that Kyiv will not be bombed or occupied, and that war with Russia is still just one of many possibilities.

In addition to issuing the travel warning to its citizens, Israel also evacuated the families of the diplomats from Kyiv. Interestingly, the Foreign Ministry in Jerusalem cited the “worsening of the situation in Ukraine,” without mentioning Russia or a possible war between it and Ukraine. Since 2015, when Russia interfered in the war in Syria, Israel has been coordinating its combat activities there with the Russian army command. Israel’s freedom of action in Syrian skies largely depends on this coordination.

Unlike other Western countries, Israel is being extra careful walking the tightrope between Russia and Ukraine. While President Joe Biden warns the world of “Russian aggression,” Israel is focusing on possible evacuation of Israelis and Jews and providing some humanitarian assistance.

It seems, however, that Kyiv is growing tired of this balancing act. Yevgen Korniychuk, Ukraine’s ambassador in Tel Aviv, lately criticized Foreign Minister Yair Lapid and blamed him for “adopting the Kremlin’s rhetoric.”

“If war breaks out in Europe − I suggest that Israel will be left alone in the face of the Iranian threat,” Korniychuk said. He was later summoned to the Foreign Ministry in Jerusalem for a reprimand call.

On Sunday, the Israeli Friends of Ukraine organization called on the government to “join a number of Western countries in an effort to prevent war between Russia and Ukraine.”

The statement, which was published in social media and sent to offices of the prime minister, foreign minister, and minister of defense, made a moral argument for supporting Ukraine.

“As Israelis and Jews, we have experienced the horrors and disasters of wars, we understand the importance and value of support by friendly countries. … After all, the lessons of history have already taught us that indifference, watching from the sidelines, or attempts to appease the aggressor always lead to disaster,” the statement read.

“We are aware of the complexity of the security situation in the Middle East and the policy of ambiguity that Israel is pursuing while refraining from supporting either side in the conflict between Russia and Ukraine. But at this critical moment, Israel, as an integral part of the family of liberal states and the Western world, cannot stand aside and watch from afar the relentless preparations for war,” the Israeli Friends of Ukraine’s appeal continued.

For now, there is no change in the Israeli position. But what will Israel do if the worst-case scenario eventuates? If the situation gets out of control and hostilities break out and shake the earth in Ukraine, will Israel keep to its neutrality and remain silent in order to appease the Russians?

Dr. Vera Michlin-Shapir, a visiting research fellow at the King’s Centre for Strategic Communications in London, believes the current conflict is much more than a regional brawl, but rather it is a tectonic clash between Russia and the West, which will make it significantly more difficult for Israel to maintain its balancing act.

“Russia wants to position itself as a Great Power. For that to happen, it aims to weaken the current Great Power – the collective West, i.e., the USA, Europe, and NATO. The Russians want to drive a wedge between the US and Europe, between Western and Eastern Europe,” Michlin-Shapir said.

“Ideally, they want to push the US away from Europe and to promote their plan for a ‘new European architecture’ that eventually will be led by Russia. I believe that now Israel will have to position itself where it belongs, with the USA,” she said.

Michlin-Shapir, who recently co-authored with Ofer Fridman an analysis called “Smoke and mirrors: Western misperceptions of Russia in Ukraine,” which was published by Institute of Modern Russia, believes the West is wrong in using the dichotomic optics of war and peace in Ukraine, and assuming that Kremlin does the same.

“In reality, the Russian strategic mindset is more flexible, as it envisions the notions of war and peace as existing on a continuum,” Michlin-Shapir said. The current crisis will include many ups and downs, and this reality might allow Israel to use its leverage and its strategic place in the Russian-Ukrainian-American triangle, she continued.

“It’s not unreasonable that in the future Israel will be able to create new spaces of dialogue. But Israel first needs to mature as a diplomatic force. Yes, it needs to take Syria into account, but now that Israel plays along with the Great Powers it needs to toughen up and to put its strategic alliances – specifically its alliance with the US − on the table,” Michlin-Shapir told the Media Line.

Dr. Evgeny Klauber, an expert on former Soviet Union countries from Tel Aviv University, warns that regardless of whether Israel maintains silence on war in Ukraine, the consequences of this conflict are already inevitable. In his assessment, war may still be prevented, or limited to areas of Eastern Ukraine, but even the possibility has already led to major developments in the Middle East.

“In the current situation, the US weakness in the Middle East will grow, and the Iranians might be drawn closer to Russia. In fact, there might be a direct connection between the US’s speedy retreat from Afghanistan and current events in Ukraine. The Middle East will feel the fire as well; it’s inevitable,” Klauber said.