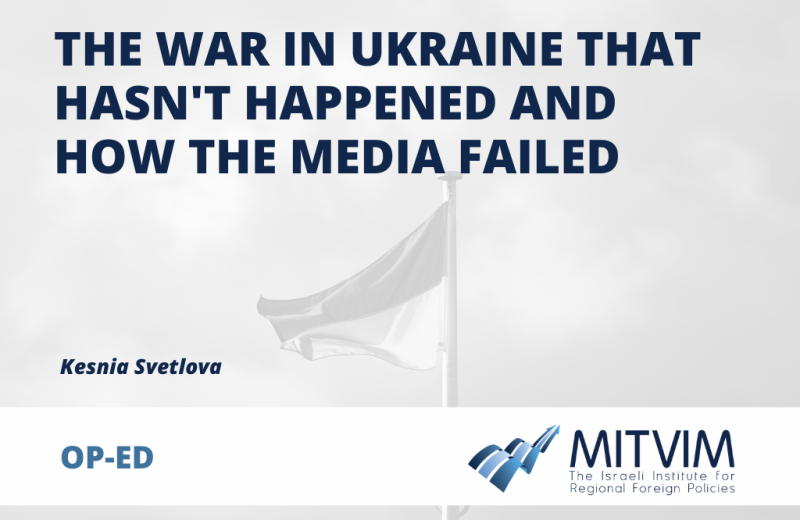 Ukrainian parents received a text message from the Education Ministry on Tuesday that called on them to send their children to school the following day in national outfits to celebrate the Unity Day earlier proclaimed by President Volodymyr Zelensky.

While media outlets all over the world counted down the hours before the beginning of the Russian invasion of Ukraine as if it were a New Year’s celebration on Times Square, Russian politicians repeatedly denied this scenario and Ukrainians carried on with their daily lives.

As foreign embassies and companies were being evacuated, the Ukrainian government, army command and parliament stayed put; not because they didn’t fear war and death, but because they assessed that war was not imminent. At the same time, foreign leaders planned visits to Kyiv for February 16, February 17 and dates in the future.

This did not stop the speculations, apocalyptic predictions and media frenzy surrounding the activity on the border between Russia and Ukraine, probably because – along with questionable reports in British tabloids that suddenly became a credible source of information – US President Joe Biden himself stood firmly behind the “imminent invasion” theory.

There is little doubt that President Biden was relying on the American intelligence interpretation of what was happening on the Russian-Ukrainian border, yet it was left up to the media to corroborate the information provided to the president from other sources, pose questions, raise doubts and simply do its job. While nobody in the West doubts that Russian President Vladimir Putin wages a hybrid war that includes massive use of disinformation and manipulations, it appears that the other side uses psychological warfare and its own disinformation for political and other gains.

First of all, let’s set the record straight: no one denies that the escalation between Russia and Ukraine is very real and that a large number of Russian soldiers and military equipment are currently stationed near its borders with Ukraine. The current Russian military exercise that involves many thousands of troops is not the first – in fact, it is the third military exercise of this magnitude to have taken place during the last 12 months, yet it is the largest exercise in Europe for the past three decades. For the time being, some Western leaders and experts estimate that according to intelligence data the war is imminent, while others, such as the UK secretary of state, believe that the current phase of escalation could “drag on for months.” Though Russia launched a war in 2008 against Georgia and annexed Crimea in 2014, this does not necessarily lead to the conclusion that a Russian invasion of Ukraine is imminent and inevitable, according to experts.

Dr. Sagi Elbaz, a political communication researcher and lecturer at Oranim College who has written several books on the media and political reporting in Israel, believes that Israeli media coverage of the developments on the Russian-Ukrainian border has been quite shallow while many important questions have not been asked.

“As a communications researcher, I do not feel that the media is giving me the full picture. If someone says that there are 150,000 troops on the border, what is the source for that? Also, there was hardly any background and context – is there any connection to American exercises in the Black Sea, how is NATO expansion seen in Russia, what is happening in Ukraine, etc. The media should not focus just on one narrative, it should provide the full picture, to interview people on both sides and that was not done,” Elbaz told The Media Line.

But is it really possible to provide the full picture, to verify all the details and to get to the bottom of things in our current world since it is often impossible to tell right from left and truth from fake? For the last few years, the world has been awash with disinformation campaigns and the search for actual facts is getting harder. During the war in Syria, for example, the media has often been shaken by the blunt attempts of both sides to lie, manipulate and use fake news in order to defend the narrative, and verifying the facts has often been mission impossible.

Yoram Peri, an expert on politics and communications and a professor at the University of Maryland who serves there as director and Kay Chair in Israel Studies at Gildenhorn Institute for Israel Studies, believes that despite the obvious difficulty, it is still possible for the media to perform its duty and to provide balanced and nuanced reporting.

“Anyone who is leaning on the guiding principles of journalism can stand against this stream of fake news and disinformation, even if it sometimes is extremely difficult. I believe that it’s crucial for the reporter to cross-check the facts. In Israel today this principle is dead. Calling different sources? Corroborating the news? This is over. But the thing is that if you have some breaking news that was released by let’s say CBS, you have to look for other sources as well. What does European media say? What do other reliable news sources say? Second of all, a reporter cannot be passive,” Peri told The Media Line.

“One of the awful things that happened with the media today is that it became passive. You receive some information, and then you just publish it as is. Very often the source isn’t even mentioned, especially when we deal with defense and security issues. I believe that it’s crucial for the reporter to reveal the source of information. Don’t just write that the ‘troops are moving.’ Who is the source? Be specific! Check if this source is associated with some specific agenda,” he also said.

“One of the most fascinating things that happened during the last few days, when the West was bracing for war in Ukraine, was Ukraine itself. The country that was supposed to be wiped from the map – according to endless Western experts and pundits – cried out that the doomsday scenario of conquering Kyiv and rolling the Russian tanks all over the country just wasn’t true. So why did nobody in the media in Israel and in the West choose to listen to the Ukrainians,” Peri added.

Elbaz believes that Israeli reporting on the situation in Ukraine has been biased. “We always talk about Putin’s Russia – a great power that has nuclear weapons, while Ukraine is perceived to be a poor state. Its citizens go to Israel to seek jobs, they are engaged in manual labor, and Ukraine is probably seen as a smaller player that is squeezed between the Great Powers. That’s why there was little attention to what was actually happening there,” he said.

Peri points to the sensationalism that has become the most dominant feature of many media outlets. “This is very dangerous. The media, especially in Israel, is chasing sensations, rather than facts. And this is the result – leaning on something that was reported by a British tabloid,” he said.

The current escalation between Russia and Ukraine will probably continue beyond the dates that are circulating in the media. The Russian troops will stay at the border, as well as in Belarus, which has rapidly turned into another Russian base of operations and lost much of its independence; meanwhile, the military confrontation in Eastern Ukraine between the separatists and the Ukrainian army will continue. There might be or might not be a war. The question is whether the media will choose to learn from its current failure and change the optics the next time the dates of a possible invasion are flying around and avoid sensationalism, even if it helps sell papers.

The op-ed was published in JPost in February 2022.

Ukraine
Prev
All Publications
Next