How Morocco relates to the Israeli-Palestinian peace process 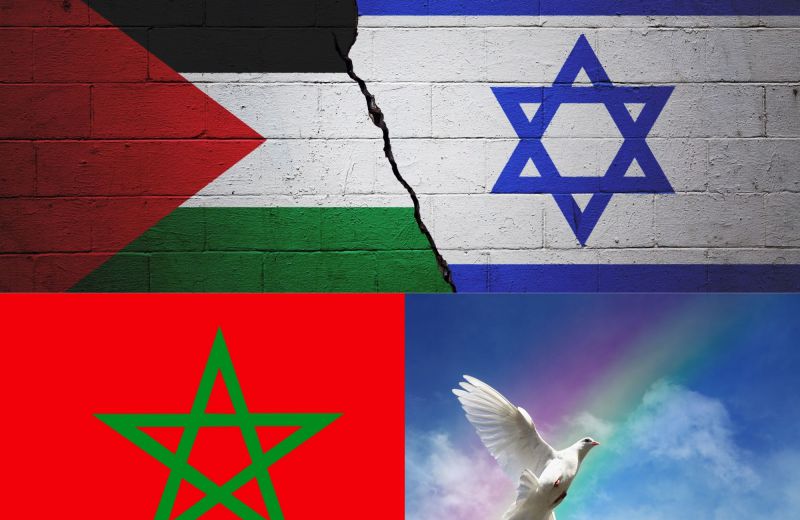 The recent Israeli-Palestinian tensions in Jerusalem prompted regional and international expressions of concern but did not yield mediation measures nor facilitate a solution to the problems on the ground. Morocco could possibly be the right fit to step into this void given its recently renewed diplomatic ties with Israel.

Morocco is committed to the Palestinian issue and to safeguarding Islam’s holy sites, a commitment stemming above all from the religious authority vested in its king as a descendant of the Alawite dynasty and Prophet Muhammad’s family. Morocco has been an Arab League member since 1958 and has chaired the Organization of Islamic Cooperation’s Al-Quds Committee for the protection of Islam’s holy sites since 1975.

This role makes Morocco relevant to the Israeli-Palestinian conflict and especially to any discussion of Jerusalem as a core issue in such negotiations. A deep cultural tie also binds Morocco to Israeli Jews of Moroccan origin. Tens of thousands of Israelis visit Morocco annually, many of them in search of their roots and heritage, often more than once. The Moroccan language, culture and heritage remain conspicuously present in many Israeli homes.

Morocco has played a role in the peace process between Israel and its neighbors from time to time throughout its history due to its relatively neutral foreign policy, its location between east and west, and the trust it engenders in both sides to the conflict.

King Hassan II attributed importance to this role and his involvement consisted mainly of facilitating communication between rival actors and providing an ideal meeting venue for initial stages of negotiations. Such was the case at the difficult birth of the Israeli-Egyptian peace process in the 1970s.

However, since the Second Intifada broke out in October 2000, Morocco’s involvement in the Israeli-Palestinian conflict has shrunk significantly and to this day is characterized by avoidance and excessive caution.

Nonetheless, Morocco has increased its involvement in mediating other conflicts in the Arab world and Africa in recent years as a tenet of its foreign policy. This may provide an opportunity for increased Moroccan involvement in moves to advance Israeli-Palestinian conflict resolution, which would depend on the political and public attitudes of Israelis, Moroccans and Palestinians.

Public perceptions in Israel present an opportunity for cooperation. The declaration of renewed official ties between Israel and Morocco generated widespread support in Israel. For Many Israelis, Morocco is not just “another state” in the region; it blends seamlessly into the landscape of nostalgia and memory that is the backdrop of Israeli society. An extensive network of civilian ties based on shared Moroccan identity and values also binds the two countries.

Some one million Jews of Moroccan origin live in Israel, where they preserve their Moroccan identity alongside their Israeli one. Morocco recognizes them as its second-largest diaspora in the world (after France).

Morocco’s renewal of ties with Israel generated a measured response by the Palestinian Authority, certainly compared to its harsh criticism of Israel’s Abraham Accords with the United Arab Emirates and Bahrain. Personal calls by the Moroccan monarch to PA President Mahmoud Abbas may have softened its stand, as well as Morocco’s insistence that it was not forging new ties with Israel within the Abraham Accords framework but merely resuming previous relations. The PA’s reluctance to damage its ties with Morocco was also a contributing factor. However, the renewed ties might have damaged Morocco’s neutral image in the eyes of the Palestinians to a certain extent.

The Palestinian issue remains on Morocco’s agenda, and pro-Palestinian public activity has increased significantly in recent years. Reactions in Morocco to the official renewal of relations with Israel were complex. On the one hand, they were highly positive, primarily due to the resulting US recognition of Moroccan sovereignty over the Western Sahara, and prompted a significant awakening of new organizations dedicated to strengthening ties with Israel and expansion of activities by existing ones. On the other hand, the move generated protests and significant opposition, along with sensitive questions in the Moroccan political arena as it prepares for elections this year.

Morocco has not been and will not be the main engine or catalyst for the Israeli-Palestinian peace process, nor a key mediator. There are other more powerful international actors with greater resources and more effective leverage that could play a more significant role under certain circumstances in prompting or accompanying the peace process. However, Morocco’s politics, geography and identity provide it with an opportunity to assist and support on a wide variety of issues that are key to advancing peace.

Moroccan foreign policy that strives for a posture of neutrality and for contributing to regional stability, the positive attitude and relative trust it engenders among both Palestinians and Israelis, as well as its historic experience, provide it with an opportunity to assist in mediating between the sides. For example, on the issue of Jerusalem.

This issue is broader than the national conflict between Israel and the Palestinians, and involves many actors, such as adherents of the three monotheistic faiths, Jordan that serves as the Arab world’s custodian of the Jerusalem sites holy to Islam, Saudi Arabia that is seeking a prestigious foothold in Jerusalem, as well as Turkey, the Catholic and Orthodox churches and, of course, Morocco, which as mentioned, holds a formal position on behalf of the OIC.

Morocco has important symbolic standing in this arena and an opportunity to legitimize whatever creative agreements the sides reach on the future of Jerusalem. It could also aid in improving the fabric of ties in the city even before agreement is reached.

While Israel’s immediate interests in that region lie in its partnership with Greece and Cyprus, Morocco could constitute a significant partner for strengthening institutions and cooperation throughout the Mediterranean, at the same time leveraging regional frameworks to advance Israeli-Palestinian cooperation (such as the Union for the Mediterranean, of which Israel and the PA are also members).

Morocco could also contribute to mobilizing public Israeli support for the Israeli-Palestinian peace process by virtue of its symbolic and emotional value for many Israelis of Moroccan origin. Morocco’s support, and the support of King Mohammed for Israeli-Palestinian negotiations could have a positive impact on the attitudes of Israelis of Moroccan origin to negotiations. This impact could increase as civilian ties between the two states expand and their relationship warms.

The international community sees similarities between the Israeli-Palestinian conflict and Morocco’s claim to sovereignty over Western Sahara, at least in terms of international law on occupation and sovereignty claims. Morocco is doing all it can, and is likely to continue doing so, to prevent such comparison, but there is undoubtedly room to study and compare international attitudes and policies to both these cases.

Should Israelis and Palestinians harness the political will to advance peace, both will find a credible, committed and positive ally in Morocco, which offers relevant opportunities and assets and would be positively inclined to help to the best of its ability to ensure the success of the process. And until the peace process is revived, it would be worthwhile offering Morocco a role in encouraging dialogue on the issue of Jerusalem in order to ease tensions and prevent escalation.

This article was published in The Jerusalem Post, May 8th 2021.