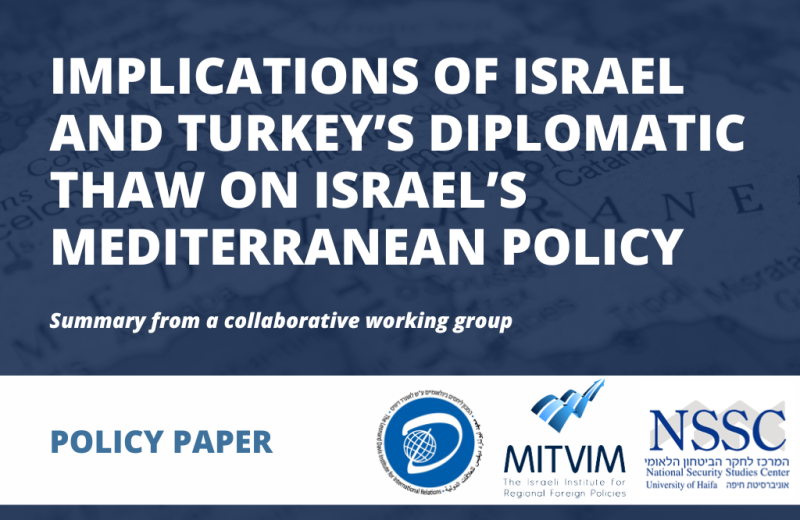 This document focuses on the challenges and opportunities for Israel’s policy in the Mediterranean Basin as a result of its warming relations with Turkey. It covers the main points raised at the 11th meeting of the Research and Policy Group on Israel in the Mediterranean Basin conducted on May 24, 2022, at the initiative of the Mitvim Institute, Hebrew University’s Davis Institute for International Relations and Haifa University’s National Security Studies Center. The document does not necessarily reflect agreement among all discussion participants.

The warming relations between Israel and Turkey

Turkish foreign policy change – Turkey adopted an assertive and confrontational policy towards its neighbors in the Mediterranean and other countries in the Middle East over the past decade. Its relations with Greece and Cyprus deteriorated over conflicting claims to economic waters and control of potential gas reservoirs, as well as the continued conflict in Northern Cyprus; its relations with Egypt worsened over Ankara’s support for the Muslim Brotherhood and involvement in the war in Libya; relations with Israel ran aground, mainly over the Palestinian issue. Turkey found itself isolated in the eastern Mediterranean Basin facing an expanding system of alliances and regional cooperation from which it was excluded. These developments prompted a turning point in Turkish foreign policy over the past 18 months aimed at thawing relations with countries in the region, including Israel. Although the Turkish moves began while Netanyahu was still in office, they gained momentum after the June 2021 swearing-in of the Bennett-Lapid government and subsequent inauguration of President Isaac Herzog.

Warming relations – Turkey began to express its desire for warmer relations with Israel, emphasizing a re-examination of potential cooperation in the field of energy and natural gas. Positive public messages were exchanged between the sides, replacing the negative ones conveyed by the parties in recent years mostly for domestic political purposes. The Turkish policy shift, together with the change of government in Israel and Herzog’s incumbency, formed the basis for slow progress in relations, which included expanded channels of communications between senior officials, the start of concrete cooperation, and a process of rebuilding trust. In March 2022, Herzog met with Erdogan in Ankara, and in May 2022, Turkish Foreign Minister Çavuşoğlu visited Israel, marking the first visit by a Turkish foreign minister in 15 years. In June 2022, the security cooperation between the countries came to light in the face of Iranian terrorist threats to Israelis on Turkish soil, prompting a quick visit to Ankara by Foreign Minister Lapid and meeting with his counterpart Çavuşoğlu despite the political chaos in Israel and the announced dissolution of the Knesset.

Cooperation potential – The warming relations hold out inherent potential for promoting cooperation, along three main channels. First, existing channels of cooperation can be expanded. These include upgrading diplomatic relations back to ambassadorial level, strengthening tourism, and expanding commercial channels. Second, thawing long frozen cultural, academic and economic cooperation channels. Finally, new avenues of cooperation must be examined – the world has changed since the freezing of relations over a decade ago. New opportunities have emerged in such fields as the need to develop renewable energy and address the climate crisis, as well as in technological advances, alongside a shared interest in regional political processes and opportunities for multinational axes. For example, Turkish moves to improve its relations with Egypt and the United Arab Emirates, along with Israel’s strengthening relations with those countries, open up opportunities for trilateral and regional cooperation in a variety of fields.

Challenges and lessons – The current course of gradually warming relations begs the question of how these developments differ from previous attempts to warm relations, whether there was a significant learning process on the Turkish side that led to a real policy shift on Israel, and what Israel has learned from the past. Previous attempts to warm relations have encountered challenges and pitfalls stemming mostly from the Israeli-Palestinian conflict. Israeli military operations in Gaza, the West Bank, and Jerusalem have generated repeated crises between the countries. The current process of warming relations is characterized by greater mutual sensitivity. This sensitivity was reflected in Turkey’s moderate reactions to the rising tensions in Jerusalem around the month of Ramadan, terrorist attacks, and Israeli responses. In contrast to the previous reconciliation attempt of 2016, this time the parties chose to conduct their dialogue at higher levels than in the past, to give the moves considerable public exposure, to use positive rhetoric, and propose ideas for consultation mechanisms to contain future crises between the sides.

Israel is Turkey’s doorway to regional integration – Turkish steps to warm relations with Israel reflect a broader move to thaw relations with countries in the region. Following a decade of assertive and confrontational policies, Turkey found itself isolated, precisely as the US was changing the nature of its involvement in the region, and a new cooperation-based regional architecture was taking shape. Given the emerging regional landscape, its isolation, and its desire to become a regional energy hub, Turkey now aspires for a role in forming regional initiatives and cooperating and strengthening its relations with countries in the region. However, relations between Turkey and other countries in the region – Egypt, Greece, and Cyprus – are even worse than those with Israel. Ankara is making efforts to reach out to Egypt, and Greece as well. But whereas its outreach to Egypt has fostered a similar process of warming relations as with Israel, the same cannot be said for the situation vis-à-vis Greece, prompting a renewed confrontational policy toward Athens. Turkey views Israel as a potential conduit to regional cooperation, not necessarily with Greece and Cyprus, but certainly with actors such as Egypt and the United Arab Emirates. While this assessment presents it with great opportunities, these must not come at the expense of Israel’s other partnerships in the region.

Learning from Egyptian-Turkish experience and the potential of Israeli-Egyptian cooperation vis-à-vis Turkey – Since Sisi’s rise to power, Egyptian-Turkish relations have been characterized by hostility and mutual distrust stemming from Erdogan’s repeated questioning of the legitimacy of Sisi’s rule. Tensions with Egypt have also arisen over Turkey’s stand with the Muslim Brotherhood, its intervention in Libya, the agreement marking the maritime border between Libya and Turkey, and its attempts in previous years to intervene in Gaza (moves perceived as intervention in Egypt’s backyard, while undermining its status and security); disagreement over the need to delineate Mediterranean maritime borders; and Egyptian condemnations of Turkish moves in the region. Nevertheless, like Israel, Egypt has maintained extensive bilateral trade with Turkey, which amounts to over $5 billion a year, a number that has grown at a dizzying pace of tens of percent in recent years. Meanwhile, Egypt is Turkey’s main source of liquefied gas imports. Starting in 2021, the two countries have embarked on a trend of cautious warming relations. This development is presented sympathetically in the media, but the Egyptian side is waiting to see how it translates into action. Given their similar situation and interests vis-a-vis Turkey, Israel and Egypt also face similar questions over their relations with Ankara, offering Israel an opportunity to learn and perhaps even cooperate with Egypt as part of the joint warming of relations with Turkey. At the very least, Israel must conduct itself with maximum transparency toward Egypt in the process of warming relations with Turkey in order to avoid crises in relations.

Relations with Turkey must not sacrifice relations with Greece and Cyprus – Israel and the Hellenic countries have built up a relationship of trust over the past decade, which allows room for maneuver vis-à-vis the Turkish issue. However, relations between Israel, Turkey, and the Hellenic countries are not a “zero-sum game” – warming relations with Turkey should not come at the cost of Israel’s relations with Greece and Cyprus. Israel succeeded in implementing this policy in 2016, and it can do so again. However, caution must be exercised, with maximum transparency and attentiveness to the concerns of Greece and Cyprus in order to prevent damage to relations. Israel is careful to accompany the warming of relations with Turkey with a series of reassuring messages to Greece and Cyprus expressing its commitment to the partnership that has been forged – public statements, visits by senior officials and tripartite meetings, and even joint military training. From the perspective of the regional framework, Israel cannot resolve the conflicts between Turkey Greece, and Cyprus, but Turkey’s integration into regional initiatives is an important process that can contribute to reducing tensions and promoting regional dialogue and stability.

Coordination with the US and Europe – Despite the widespread regional perception of an American pullout from the Middle East and the Mediterranean Basin, the US clearly remains very involved, despite a change in its modus operandi. The war in Ukraine has also shuffled the deck, leading the US and Europe to invest considerable resources in the face of the Russian threat. These include strengthening ties with oil-producing countries in the Middle East and bolstering the NATO alliance, in which Turkey plays an important role. These circumstances explain the US and European desire to see Turkey integrate into the Mediterranean Basin and cooperate with their other allies in the region. To the extent that initiatives are advanced to integrate Turkey into the region and strengthen its relations with countries in the region, an open and coordinated dialogue with the Americans and Europeans must be maintained in order to leverage it optimally for Israel and the region. In contrast to the process of warming Israeli-Turkish relations in 2016, this time care must be taken to ensure that the warming of relations with Turkey progresses in a coordinated manner with the US and Europe, rests on a stronger and more robust foundation, progresses at an appropriate pace, and serves Israel’s desire to promote stability and regional cooperation over time.

Integration of Turkey into regional forums – Turkey aims to reduce its dependence on Russian gas and become a regional energy center, making cooperation in the field of gas and energy a major goal of the Turkish move to warm relations with Israel. Plans to export Israeli gas to Turkey via a pipeline seems to be unfeasible and unviable, and Israel must make this clear to Turkey at the outset and not create expectations that cannot be realized. Nevertheless, there is potential for Turkey’s integration into regional frameworks, which to some extent will meet the Turkish need and promote regional interests, and Israel can help in this regard. Potential new areas of cooperation could include the fields of renewable energy and climate change, serving as the basis for a new regional network that includes Turkey.