Is it time for a new approach to deal with the Iranian threat? – opinion 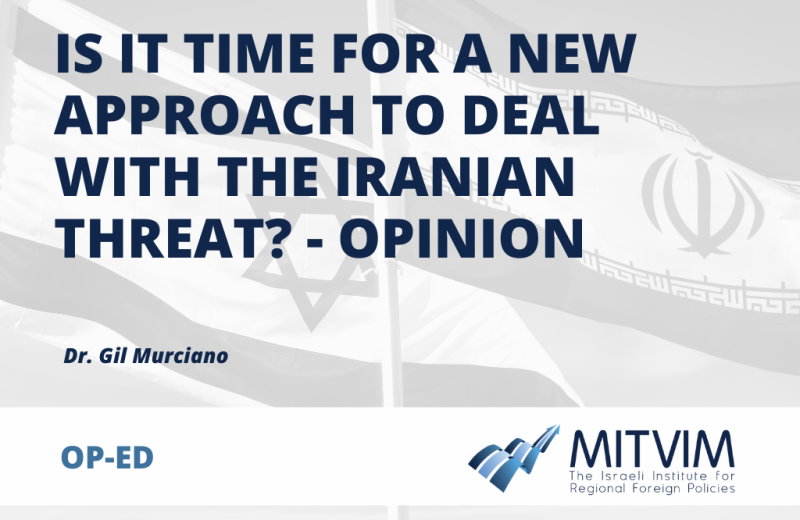 Tough times are ahead for decision-makers in Jerusalem. As the clock ticks in Washington, Brussels and Tehran, counting down to Iranian nuclear breakout capability and international pressure intensifies to accept a flawed and much weaker agreement than the one signed in 2015, Israel must choose between bad and worse options.

On the one hand, it adheres to its policy of rejecting any agreement with Iran, on the other, it faces the growing realization that no real alternatives exist to an agreement that would halt Iran’s nuclear race. In the meantime, the futility of military measures to stop Iran’s rush to nuclear weapons is becoming increasingly clear. Lacking new ideas, and consistently harping on the same policy messages formulated a decade ago, Israel’s bargaining position and its ability to influence the state of play have been deeply eroded.

Why name it after Menachem Begin?

The current crisis challenges the fundamental principles of Israel’s nuclear proliferation policy, named after prime minister Menachem Begin’s decision to attack Iraq’s Osiraq reactor in 1981. The so-called “Begin Doctrine” has since served as the guiding Israeli principle dictating the use of “all means necessary” to prevent its enemies from acquiring nuclear weapons. This doctrine mostly focused on two principles: independent Israeli action in the face of such threats, and kinetic military action as the main method to upend development efforts, even at the cost of possible military escalation.

Since the attack in Iraq, the concept has undergone some adjustments in accordance with changing reality. For example, political and operational US-Israel coordination has increased, but the doctrine’s principles are unchanged. Its credibility was further enhanced by the success of the 2007 operation “Out of the Box,” an Israeli airstrike that nipped in the bud a Syrian-North Korean effort to develop nuclear weapons.

The Begin Doctrine also underpins Israel’s policy on the Iranian nuclear program. Indeed, the political component – support for maximum international pressure and opposition to contractual solutions with Iran – is an essential component of Israeli policy. However, the policy also entails kinetic activity – intensive use of a variety of military means to physically halt the Iranian project. This is a large-scale and creative effort, one of the most extensive in the history of Israel’s national security, to identify vulnerabilities and develop operational capabilities to damage the infrastructure of Iran’s nuclear project.

The effort has yielded a decade of operational successes using an array of tools, according to foreign reports, from the introduction of the Stuxnet malware into Iran’s uranium enrichment facilities in 2011, through a series of assassinations of Iranian nuclear scientists, to the sabotage of the enrichment facility in Natanz last year. These successful operations have created the illusion that the campaign to halt Iran’s nuclear ambitions would be a rehash of Israel’s success in quashing the Iraqi and Syrian nuclear bids. Here, too, the Jewish (and American) brain, along with several hundred kilograms of high explosives, would put an end to Iran’s military nuclear fantasies.

However, although Israel has won many battles, it has lost this war. While its varied and imaginative operations delayed Iran’s progress, they did not change its direction. Iran is currently approaching the status of a “nuclear threshold state”; its ability to break through to nuclear weapons depends to a large extent on its leaders’ decisions alone, not on developing additional capabilities.

Should Iran choose to leap forward and enrich enough uranium for a bomb, it can do so at its leisure. Should it choose to hang back, it can seek to take advantage of its proximity to nuclear capability in order to enhance its geopolitical standing. In either case, the tangible Iranian experience of recent years – enriching uranium to high levels of 60% – has moved them through a conceptual point of no return, a point that the emerging agreement will no longer be able to turn around.

Advanced centrifuges can be shattered, and enriched uranium can be shipped for storage to a third country, but how do you obliterate the knowledge the Iranians have accumulated in high-level enrichment? How do you reverse the expertise gained in the construction of upgraded centrifuges?

The failure to halt Iran’s nuclear program has exposed the fundamental weakness of the Begin Doctrine – it is effective primarily in degrading enemy capabilities, not in changing conditions or motivations. When the doctrine meets a national-strategic effort of a powerful state, the most it can do is postpone the inevitable conclusion. A hint of this was clearly discernible in the Iraqi reactor attack: the facility’s destruction did not prevent Saddam Hussein from nearing nuclear capability less than a decade later, on the eve of his invasion of Kuwait in 1990.

The current crisis point ostensibly presents Israel with a prime opportunity to reexamine its strategy against nuclear proliferation. However, criticism of existing policy on the Iranian nuclear project and discussion of shifting realities and their future implications are strictly limited at the political level.

Across the political spectrum, few are willing to admit the fundamental flaw of the Israeli perception and its failure, let alone, to offer alternatives. The people of Zion are not overly fond of prophets of doom, and the electoral price of such outspokenness is too high. Far more convenient to continue talking about military options (knowing they do not exist) and the tightening of sanctions (which do not achieve their ultimate goal).

And so, almost 50 years after the 1973 Yom Kippur War, the Israeli system is once again in cognitive dissonance, crippled by a political, professional and mental inability to challenge a concept that has taken root over four decades. How can we explain to the public and to ourselves why we have invested so much money and political capital and endangered human lives, in promoting a failed policy? It is easier to stick to the existing concept, introducing tactical improvements to current policy, rather than change the line of thinking outright.

What Israel needs now is nothing short of a conceptual overhaul of the fundamental assumptions underpinning its policy on the Iranian threat. It needs a new and different strategic forum that will pose new questions we must ask even if we do not wish to do so.

Topping the list is the most difficult question of all – what happens on the day after Iran achieves the nuclear threshold level? Along with last-minute attempts to scuttle this stage, we are required to ask what changes Israel should make to its strategic policy in case of Iranian nuclearization. A political-strategic discussion on Israel’s political moves in this grim but not impossible reality is imperative at this point. This does not, of course, mean that Israel should cease its attempts to block Iran from completing its advance toward an operational nuclear facility.

However, confronting the question of the day after is also essential for Israel in order to plan its actions on this day; the matter must be addressed despite the mental difficulty it provokes. Challenging assumptions requires discussing questions to which we think we already know the answers. Central among them is the question of whether Iran is one rigid and monolithic whole, or whether there are shades and differing interests among its influential actors.

An essential part of the discussion should be reserved to practical steps. It should examine the potential to incorporate international and regional systems as partners in a coordinated political campaign against shared Iranian threats. First, Israel’s strategic relationships with its strategic partners should be reexamined, with an emphasis on rethinking the concept of a strategic alliance between Israel and the US, as well as significantly upgrading the relationship with NATO. Second, the discussion must address the most significant development since the collapse of the 2015 nuclear agreement – the normalization agreements and the new potential for building a system of strategic security partnerships with countries in the region, whether above or below the surface.

Israel has already begun this discussion, mainly in the field of air defense, but there is still great untapped potential for expansion. In this context, a joint strategy is vital for outlining possible scenarios, such as an increase in Iran’s regional military activity or the threat of a regional arms race.

Establishing a new strategic discussion forum necessitates diversifying the circle of participants and injecting new and different knowledge into the mix. Shaping new concepts and thinking about Iran requires a different circle of experts that combines existing expertise with new voices and disciplines. Regional and international diplomatic expertise, as well as deep and multilayered knowledge of Iran’s society, economy and culture are essential components. Civil society should have a central place in the debate as a repository of thinking not limited by political or bureaucratic constraints.

The challenge facing Israel in rethinking and adapting its Iran policy to the new reality is one of the most complexes it has ever faced. The nation that demonstrated creativity in penetrating dozens of meters below ground into the centrifuge facilities at Natanz will now be required to demonstrate similar creativity in the political and conceptual spheres. The starting point is to admit to ourselves that the existing conception, the Begin Doctrine, is no longer relevant.

Iran / Israel-Iran
Prev
All Publications
Next