One year in, how a US law is disrupting the status quo 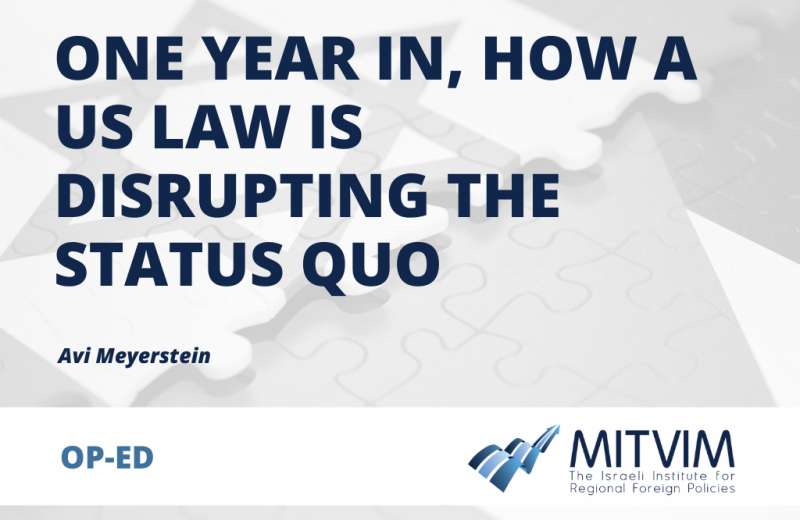 In recent days and weeks, we’ve seen gun battles in the streets, nightly raids, terror attacks, and the “highest in years” death toll in the West Bank. For three days this summer, the skies once again filled with drones, F-16s, and 1,100 rockets.

These intensifying bursts of acute violence terrorizing, wounding, and killing Israelis and Palestinians should remind everyone that the conflict is not over or managed. This is what the decades-long, constantly-deteriorating status quo looks like. Bloodshed rises and falls, but it’s always there, grinding on.

In moments of crisis, it’s tempting to think short-term and seek quick fixes. But that’s exactly how we got here in the first place. We must do more than apply band-aids and limp along until the next emergency. We need to direct the passion and outrage of the moment toward the serious, painstaking work of taking apart the structural factors that cause this to keep happening.

Easier said than done. Both Israelis and Palestinians feel stuck. Too many have accepted this as an unavoidable reality. Everyone knows that violence is an option, however futile. But few see any alternative. Both sides have spent the last two decades wondering: How can we make peace without a trustworthy partner?

As Huda Abuarquob and I wrote in January, that’s why hundreds of grassroots initiatives — and a recent US law, MEPPA — look beyond the stalemate du jour to focus on the long term. Today, there is no political-diplomatic leadership or vocal public constituency for peace. So, a growing ecosystem of peacebuilding NGOs is building the relationships and attitudes which the next generation of Israelis and Palestinians will need if they’re ever to exit this tragedy. MEPPA commits at least $250 million over five years to scale up such economic and civil society partnerships.

It’s been just one year since USAID’s flagship Partnership for Peace Fund opened its doors. Already, the US chose five major project investments at $2 to $5 million each (with more to come). Combined, they will touch thousands of Israelis and Palestinians across diverse sectors.

But MEPPA is not just an annual budget line for each year’s most interesting projects. Its multi-year horizon, ambition for policy change, and call for international leverage set it apart. NGOs, US decision makers, other nations, and private philanthropists are all investing in parallel in the peacebuilding ecosystem. How can we all maximize these next few years together?

In a new paper published this month by Mitvim – The Israeli Institute for Regional Foreign Policies, I look back over what’s been accomplished in the last year and what exciting opportunities have opened up as MEPPA’s second year begins. The paper’s detailed considerations for stakeholders focus on three major questions.

First, how can we be most strategic? Where do we want to be in a decade’s time? If today’s peacebuilding programs engage tens of thousands of people, what will it take to reach millions? What would a balanced investment portfolio look like across different demographics and locales? How do we ensure that every project — including economic ones — leads to conflict transformation? How do we build one initiative upon another in a growing progression? What metrics will we use to know when it’s working?

This moment of big investment begs for a field-wide master plan, identifying concrete goals over the next five, ten, and twenty years. A group of conflict resolution and regional experts could add critical input. A new impact app and standardized metrics could help funders and practitioners alike measure progress and identify areas of need and opportunity.

The second major question: Who can be our partners, and who’s missing from the table? Both smaller NGOs and underserved communities come to mind. There are many small- and medium-size peacebuilding NGOs, which matured over the last two decades but are not yet ready for multi-million-dollar projects. They could really level up with smaller grants (perhaps $300,000 to $1.5 million), plus capacity-building support.

Likewise, more projects can engage “unusual suspects” in peacebuilding, including religious and more conservative communities. Though delicate and often quiet, this work has been growing and fills an important gap.

With a conflict so powerful and resourced, the third major question is how do we leverage this major five-year investment into even more? One way is for more projects to seek systemic change. When public schools adopt a curriculum developed by civil society, for example, the impact spreads exponentially as tens of thousands of students benefit.

Peacebuilding can also gain leverage by working more with program graduates, helping them navigate their home communities, connect with each other, and take action for change. With funder support, more programs can implement these high-leverage practices on the ground.

Yet, one year in, MEPPA’s greatest potential for leverage and impact still sits on the international stage. This bold, unprecedented US investment could be a cornerstone in building a $200 million-per-year International Fund for Israeli-Palestinian Peace. Indeed, the success of the International Fund for Ireland, which began tilling the soil for peace twelve years before the Good Friday Accord, underscores the power of this model.

Creating an institution with the mandate, resources, credibility, and expertise to change the dynamics of this conflict is a bigger project than any one nation or donor can do alone. As instability looms and time seemingly runs out, international support for such a fund is growing. Now is the moment to secure MEPPA’s longest-lasting legacy: launching a long-term push to help the next generation find their partners and their way out of this mess once and for all.