Israel remains caught between China and the United States- opinion 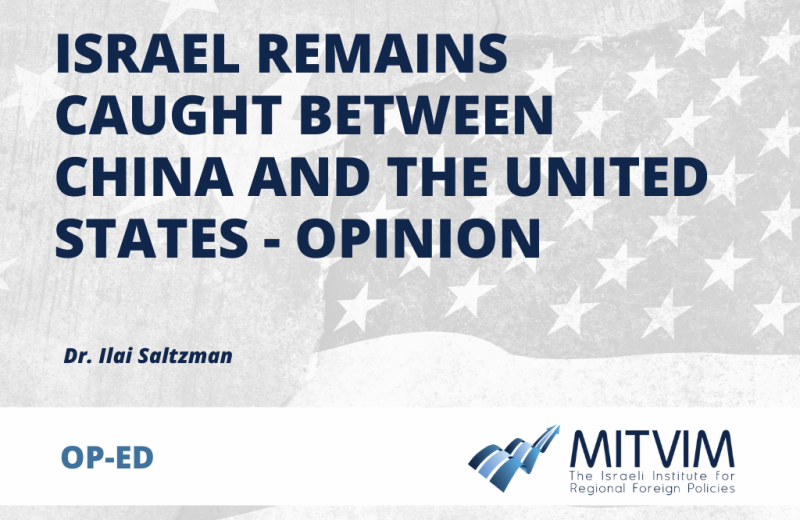 The first meeting of the United States-Israel Strategic High-Level Dialogue on Technology took place in Washington, last week. According to the Jerusalem Declaration that established this forum, the objective is to “establish a partnership on critical and emerging technologies to bring the cooperation between the countries to new heights.” Though the language speaks of a bilateral partnership, the purpose of this working group is, in fact, to make sure the Israeli government does not sell technology to China the American administration deems a threat to US national security.

As Sino-American relations become more contentious, Israel has been quickly drawn into the crossfire given its close association with the US. Still, Israel’s technological exports to China and the challenges they pose for the US are not new. In the mid-1990s, for example, the Israeli government sought to sell China several Phalcon Airborne Early Warning (AEW) systems for an estimated $1 billion (NIS 3.5 b.). Under massive pressure from the White House and Congress, Israel eventually canceled the deal and had to pay back the $200 million (NIS 705.6 m.) down payment to the Chinese government, as well as $150 million (NIS 529 m.) in compensation.

Over the past decade, the American administration has become exceedingly apprehensive about China’s legal, as well as illicit efforts to boost its technological competency, and challenge the US’ advantage in innovative research and development (R&D). Beijing was frequently accused of engaging in extensive cyber campaigns designed to steal sensitive data concerning novel military technology from American governmental agencies, as well as private defense contractors.

FBI Director Christopher Wray publicly asserted in July 2020 that “The greatest long-term threat to our nation’s information and intellectual property, and our economic vitality is the counterintelligence and economic espionage threat from China. It’s a threat to our economic security and by extension, to our national security.” This harsh rhetoric is reminiscent of the Cold War era and it implies there is an all-consuming Sino-American great power competition that does not allow US allies to flirt with adversaries even in the ostensibly innocuous economic realm, let alone when it comes to advanced technology with military applications.

THE TENSE technological China-Israel-US triangle is further complicated by American worries regarding the efforts of Chinese companies to gain access to and possibly ownership over Israeli critical infrastructure, including ports, railways and highways as part of Beijing’s global Belt and Road Initiative. In August 2021, for example, director of the CIA William Burns expressed his concerns regarding Chinese investments in Israel during a meeting with then-prime minister Naftali Bennett. A senior State Department official told the Senate Foreign Relations subcommittee, “We know our partners and allies in the Middle East have trade relations with China and that’s OK… but we made it clear that there is a certain kind of cooperation with China we cannot live with.”

According to Israel’s Central Bureau of Statistics, China became Israel’s largest source of imports in 2021, topping the US, and Israel’s largest trade deficit was also with China, totaling $6.6 billion (NIS 23.3 b.). Given the clear imbalance, from the Israeli perspective expanding trade relations with China makes sense and it is all about the promise of a massive and lucrative market for Israel’s burgeoning tech industry.

From the American administration’s standpoint, however, the problem revolves around military technology and dual-use technology that can serve both civilian and military functions. Israel’s role in China’s economic and military rise in support of Beijing’s regional or global aspirations, albeit considerably modest as well as indirect, is something with which the US is growingly uncomfortable.

In the late 1940s and early 1950s, David Ben-Gurion had to make a difficult decision about Israel’s global orientation and choose between East and West despite previous efforts to remain non-aligned. Israeli leaders are about to face a similar pivotal moment, although this time the dilemma is less severe. The US-Israel special relationship and the diplomatic, military and economic reliance on the Americans do not lend any meaningful support to a keep-all-options-open Israeli approach.

As Sino-American relations continuously worsen, the fork in the road moment is fast approaching, and Israeli policymakers must be prepared and willing to take the right path. Ben-Gurion chose the West over the East, the US over the Soviet Union. There are short-term benefits to selling technology to China or allowing it to build or own parts of Israel’s critical infrastructure.

There may be a way to tactically come to an understanding with the American administration regarding certain aspects of the China-Israel relationship. In the long-term, however, Israel’s future is with the US and maintaining the bilateral special relationship is of the utmost strategic importance.