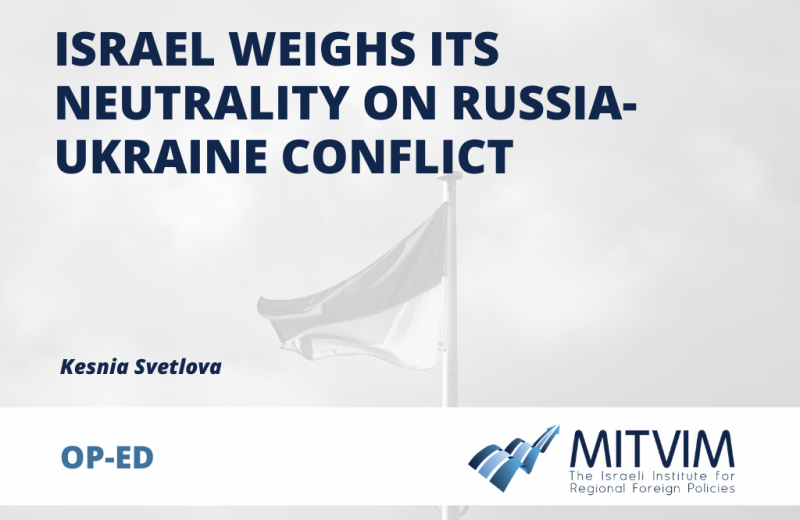 While Western countries mull sanctions against Russia after it formally recognized the independence of two self-proclaimed republics in eastern Ukraine, Israel is busy reshaping its attitude toward current developments. Until very recently, Israel kept mum on Russian threats and their implications, refraining from taking a clear stand like other countries in the West or expressing criticism. According to some analysts, the latest statement from Foreign Minister Yair Lapid could signal a break from Israeli neutrality on Russia and Ukraine.

What did Lapid really say?

Speaking with Oded Ben-Ami on Israel’s Channel 12 News on Sunday, the foreign minister answered the anchor’s question on the possibility of Israel imposing sanctions on Russia if the US does. Here are Lapid’s exact words:

“Look, then we’ll have to consider. That’s not the situation [right now]. We need to understand, we are not there, and I assess twice a day if and when we want to move our embassy from Kyiv. We are being careful, and we need to be careful.”

Soon after the interview, the headline on Channel 12, and later in other media outlets, said, “Israel will support sanctions on Ukraine,” misquoting Lapid.

It seems that the media were too fast to interpret Lapid’s words as readiness to join the Americans in imposing sanctions on Russia, and yet his actual “wait and see” statement can also be considered an interesting deviation from traditional silence.

Why Israel chooses to be ‘Switzerland’ on Russia and Ukraine

Israeli officials often say that Israel is a small country and cannot afford to be caught between two Great Powers – Russia and the US – considering that it depends on Moscow’s cooperation in Syria.

However, even before Russia intervened in Syria in 2015, Israel maintained silence on the 2014 annexation of Crimea. Back then, the White House and State Department explicitly expressed their anger over Israel’s neutrality. Senior members of the Obama Administration, some of them are currently part of Joe Biden’s team, privately expressed disappointment at Israel’s position. After Crimea was annexed, Israel’s relations with Russia continued to flourish. Then-Prime Minister Benjamin Netanyahu paid multiple visits to Moscow and Sochi and often bragged about his “warm personal relations” with Russian President Vladimir Putin.

Zvi Magen, a research fellow at the Institute for National Security Studies at Tel Aviv University, who was Israel’s ambassador to Ukraine from 1993 to 1997 and ambassador to Russia from 1998 to 1999, told The Media Line that what seemed to some like a light fluctuation in Lapid’s approach actually reflected a policy change.

“This kind of statement is not in any way incidental. I believe that the ‘narrow cabinet’ ministers took and approved this decision. Let me remind you what kind of relations we have with Russia. We have agreements and understandings: They don’t meddle with what we do in Syria [against Hizbullah and Iranian agents]; we don’t meddle in their internal business or the situation in Ukraine,” Magen said.

“But in recent weeks,” he continued, “something changed. They [the Russians] changed their tone. Their rhetoric on Israel became harsher, they operate jammers and other electronic devices that cause interference with our flights, they conduct airborne drills on the [Syrian-held eastern] Golan along with Syrians.

“It seems like a change of a political course and even a looming conflict. I have a feeling that Russia intends to open another anti-US front here in the Middle East. It will not necessarily be against us but there will be consequences,” the expert said.

Magen believes that Lapid’s cautious statement has to do with the changing situation on the Syrian front.

Ex-MK Roman Bronfman, who was born in Ukraine, said he was “pleasantly surprised” by Lapid’s words.

“The era of deliberation and the search for concealment and silence is coming to an end. It is good that Israel has chosen this step for several reasons, certainly because of the strategy of partnership with Americans, and also in terms of values. The State of Israel must stick with humanitarian values and cannot be in favor of an illegal invasion and provocations by Russia against its neighbors. It happened to us with Belarus − instead of returning the ambassadors, we sent them to attend [President Alexander] Lukashenko’s parties and events.”

The right side of history

For many Israelis of Ukrainian and Belarusian origin, Israel’s awkward silence on tragic events in Belarus, where peaceful demonstrations were crushed and supporters of change are brutally persecuted, is a sore point. Some hope that due to changing circumstances and American pressure, Israel will make the right choice.

Alexander Fruman, an Israeli who was brutally beaten and tortured by Belarusian security forces in 2020 during demonstrations in Minsk, believes that Israel can no longer afford to stick to what he calls “cowardly neutrality.”

“When responding to the Belarusian diaspora in Israel, Yair Lapid hinted that the fear of waking up a sleeping bear on the ‘common border with Russia’ on the Golan prevented the Foreign Ministry from taking any active measures against Belarus,” Fruman told The Media Line. “A fear of unpredictable actions by the Belarusian regime against Jewish organizations in Belarus was also noted as a deterrent.”

“Fateful events are taking place in the world and, as things stand now, the cowardly silence of Israel will go down in history as a diplomatic disgrace and be an eternal stain on relations between the Belarusian, Ukrainian and Israeli peoples,” he said.

“The fact that the Foreign Ministry, under pressure from the United States, is ready to quietly express its position on what should be obvious, only makes Israel out to be not completely independent in foreign policy and supports Putin’s mythical narrative that there is one sovereign and his vassals,” he added.

It is still unclear whether Israel will support American actions in case of further escalation in Ukraine. But it seems that the pressure on decision-makers in Jerusalem from within and without will continue to mount. Eventually, Israel, a staunch US ally, might discover that neutrality is not always the right or the easy choice.