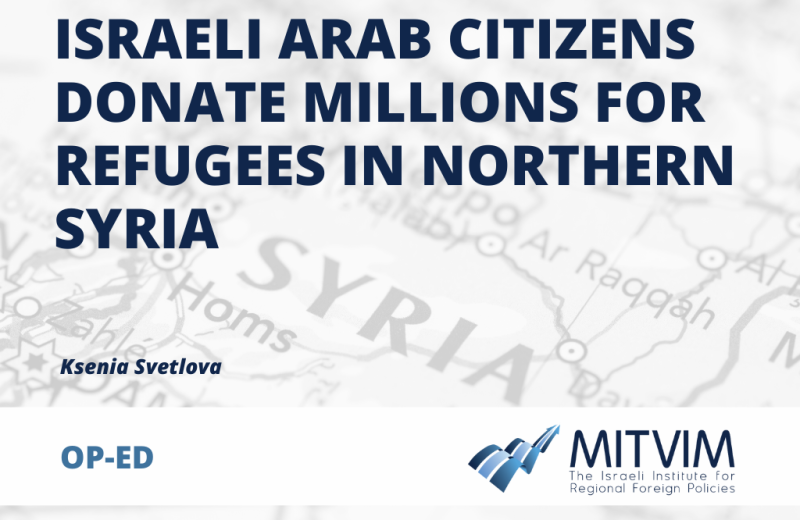 “Your donations have reached #Northern_Syria. One of the largest convoys of a charitable relief campaign has been launched to reach the needy and refugees and to protect them from the winter cold. #Igatha 48 – Islamic Movement.” This Facebook post was written by Sheikh Safwat Freij, the head of southern branch of the Islamic Movement in Israel, and it included a video showing trucks loaded with humanitarian aid donated by Israeli Arabs designated for internally displaced refugees in northern Syria.

During the last few weeks, this campaign waged by Igatha 48 – a charity arm of the southern branch of the Islamic Movement in Israel – has collected well over 8 million shekels or about $2.5 million to help the refugees in northern Syria. The funds and the goods are collected in mosques as well as through a designated bank account which is publicized in Arab-language media and on the Facebook pages of other charitable organizations in Israel’s Arab sector. The campaign gained immense popularity during a recent live broadcast donation effort via Facebook, when the mayor of Kafr Qasim made a personal donation of a few thousand shekels, sparking a “donations competition” among Arab cities and villages. Israeli media barely reported this countrywide campaign that included neighborhoods in East Jerusalem, big cities, small villages and Palestinian refugee camps.

Late last week, the United Nations warned that many of Syria’s nearly 3 million displaced persons and refugees face dire winter conditions after the region experienced record-low temperatures and a snowstorm. The humanitarian crisis in the country had entered its 11th year and, according to international relief organizations, the situation is far from getting better.

“The current campaign is just one of many,” said Ghazi Issa, chairman of the Igatha 48 charitable organization affiliated with the southern branch of the Islamic movement in Israel. Igatha is the Arabic word for relief. “We held a similar campaign last year, two years ago and so on. They usually take place in winter, since the Syrian winter is very cold and hard and the hardship of the refugees is growing,” Issa told The Media Line.

According to Issa, Igatha 48 also held similar relief campaigns for Palestinians in Gaza and the West Bank, and is recognized by the United Nations. All collected funds and goods are transferred to northern Syria through the charitable association and facilitated by the Turkish charitable organizations Khair al Umma and Tariq al-Haya that operate inside Syria, he says. The activists of Igatha do not cross the border, since under Israeli law Syria is regarded as an “enemy state”; they instead watch the trucks carrying the humanitarian aid as they cross the Turkish-Syrian border on their way to the refugees.

One of the charity’s most recent projects is a brand-new Syrian village called “Orange Jaffa.”

The Orange Jaffa village is located in the township of Basiqah in Idlib Province in northern Syria. In the first stage, Orange Jaffa will comprise 100 residential units, and the plan is to eventually create 500 residential units that will be connected to running water and electricity, replacing the tents that the refugees suffer in through the winter.

“This is a human matter. We are all brothers, we are one nation. If a person sees children that are freezing to death, he must move and do something. The issue is not just aiding Syria. It’s human compassion and mercy,” Freij told The Media Line.