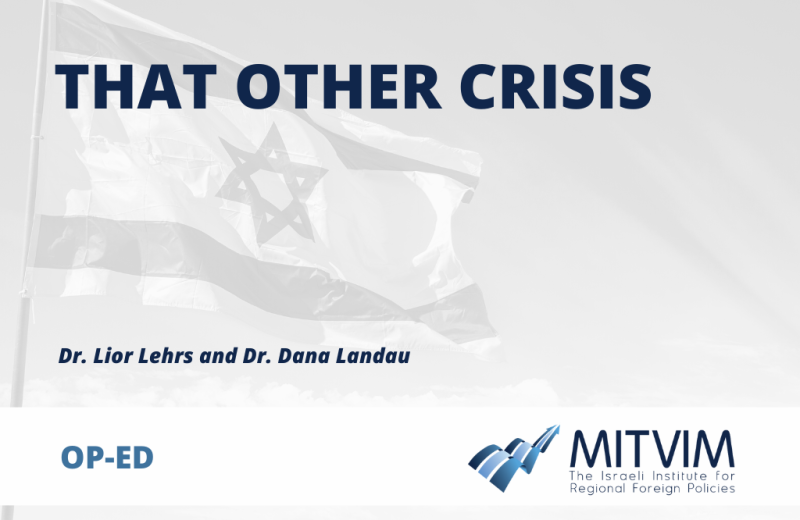 In January 2001, US President Bill Clinton met with President-elect George W. Bush and presented him with a priority list of the most important global security issues. At the top were two issues – Osama bin Laden/al Qaeda and “the absence of peace in the Middle East.” The meeting took place shortly after Clinton’s intensive efforts to achieve an Israeli-Palestinian permanent status agreement had failed. Twenty years later, the position of the Israeli-Palestinian issue on the US priority list, and that of the international community in general, has changed dramatically. International interest and engagement have faded during the last decade while the peace process has been paralyzed since the collapse of Secretary of State John Kerry’s peace initiative in 2013–14.

The Biden administration has not appointed a special envoy on Israeli-Palestinian affairs and has shown only low-level engagement with the conflict. Secretary of State Antony Blinken explained at his confirmation hearing that the new administration supports a two-state solution, but added: “I think realistically it’s hard to see near-term prospects for moving forward on that.” There seems to be a lack of urgency and no clear international strategy on Israeli-Palestinian peacemaking, as evidenced by the fact that the Quartet (the US, Russia, UN and EU) is not playing an active role, despite broad expectations that the Biden administration would revitalize the group’s activity after its paralysis during the Trump years. The 2020 normalization agreements between Israel and UAE, Bahrain, Morocco and Sudan are further proof that the prominence of the Palestinian issue in some parts of the Arab world has declined.

Many international actors criticized Trump’s policy toward the conflict, especially regarding issues such as Jerusalem and settlements. They also welcomed the fact that Israeli Prime Minister Benjamin Netanyahu’s annexation plans were shelved as part of the Israeli-UAE normalization agreement, and that the US, under President Biden, has returned to international consensus. The Biden administration has stressed its alignment with international law and the well-known parameters for resolving the conflict, renewed the dialogue with the Palestinian leadership in Ramallah (after a three-year rift) and resumed US aid to the Palestinians (and to UNRWA). But it did not reverse some of Trump’s actions, and in particular, despite its promises, did not reopen the US consulate in Jerusalem, which conducted contact with the Palestinians over the years and was folded into the embassy by Trump. Most importantly, it has failed to pursue diplomatic initiatives to get the parties to the table.

Explanations for this lack of US attention are easy to find in the bigger crises occupying this administration: the Covid-19 pandemic, climate change, China, Ukraine, as well as more pressing regional issues in Iran, Syria, Afghanistan and Yemen. Yet the Israeli-Palestinian context itself offers ample reasons: the repeated failures of past rounds of negotiations tell a cautionary tale for any international actor hoping to advance talks, leading them to focus resources elsewhere. It is easy to conclude from the realities on the ground that the time is not ripe for talks. On the Palestinian side, the deep rift between the Hamas ruling Gaza and the Palestinian Authority (PA), with its own deficits in democracy, raise the question of who could credibly negotiate on behalf of the Palestinian people. While the international policy of isolating Hamas has not diminished its grip on power in the Gaza Strip, the PA’s approval ratings have reached historic lows, the 2021 elections have once again been postponed and a whopping 74% of respondents in the West Bank and Gaza Strip now say they would welcome the resignation of PA President Abu Mazen, who’s in his sixteenth year in office. On the Israeli side, four consecutive elections between Spring 2019 and Spring 2021 finally brought a “change” government to power. Yet this government, united only in its desire to end Benjamin Netanyahu’s long tenure, comprises coalition partners from across the ideological spectrum – and even includes a Palestinian party for the first time – and is thus not in a position to take any bold steps in possible negotiations. Furthermore, rightwing and hawkish positions continue to dominate the Israeli discourse on the Palestinian issue; both Israeli and Palestinian public opinions have gradually lost faith in the peace process and in the possibility of a two-state agreement. International hesitancy to invest political capital in attempts to kickstart talks under these conditions thus comes as no surprise.

The escalation of violence and war in Gaza in May 2021 briefly brought the conflict back into the headlines and social media channels, and to the forefront of international politics. Initially centered around evictions of Palestinians from their homes in East Jerusalem’s Sheikh Jarrah neighborhood and clashes between Palestinians and Israeli police at the Damascus Gate and the Temple Mount/Al-Aqsa compound, violence quickly escalated across towns with mixed Jewish and Palestinian populations throughout Israel proper and culminated in an 11-day war between Hamas and Israel. However, following international involvement in brokering a ceasefire, led by the Biden administration and Egypt, even this war failed to generate lasting international engagement.

Signals emanating from the new Israeli government, formed in June 2021, are mixed. While some of its leaders, such as Foreign Minister Yair Lapid, express support for a two-state solution and the resumption of the peace process, others, among them Prime Minister Naftali Bennett, oppose peace negotiations and a Palestinian state. After years of political disconnect, the new government renewed high-level dialogue among Israeli and Palestinian officials – including meetings between Israeli Defense Minister Benny Gantz and PA President Abu Mazen and between Lapid and PA Civil Affairs Minister Hussein Al-Sheikh – and agreed on certain confidence-building measures addressing civil and economic issues. Nevertheless, the situation on the ground has not meaningfully changed; the expansion of settlements proceeds; de facto annexation inches closer to reality; settler violence is on the rise; the eviction of Palestinian residents from their homes in East Jerusalem’s Sheikh Jarrah and Silwan neighborhoods continues apace; and the Israeli government has criminalized the work of Palestinian civil society groups.

The reluctance of international actors to get involved in attempts to renew Israeli-Palestinian peacemaking is accompanied by a misleading sense of stability and calm. The world should pay attention to forces inherent in the status quo that are anything but stable. Ongoing settlement expansion and gradual de facto annexation undermine any prospects of a viable two-state negotiated outcome, which is still the official international consensus; tensions continue to rise at various points of friction in East Jerusalem and the West Bank, with settler groups’ increased use of violence and efforts to create new outposts; the deep political and economic crisis in the Palestinian Authority, together with continued Hamas-Fatah strife and Hamas’ efforts to ignite the West Bank, raises concerns over the stability of the PA and potential chaos in the West Bank; and given the explosive situation and humanitarian crisis in Gaza, another Israel-Hamas flare-up is always possible.

Against this background, the US and the international community cannot afford to ignore the conflict, nor focus only on small-scale de-escalation and economic measures; conditions call for addressing the structural and deep-rooted problems directly while working toward a long-term political vision that includes a real transformation of the situation on the ground. On Jan. 19 of this year, UN Special Coordinator for the Middle East Peace Process Tor Wennesland crystallized this point in an address to the UN Security Council: “Piecemeal approaches and half measures will only ensure that the underlying issues perpetuating the conflict continue to fester and worsen over time” and “efforts by the parties and the international community to stabilize and improve conditions on the ground should be linked to a political framework.” While it’s easy to surmise that the Biden administration is focused on preventing war and not brokering peace, history exposes the pitfalls of this short-sighted vision – short-term efforts at preventing escalations will not suffice to stop the forces at play, which over time increasingly mitigate against an agreement. Without a political vision, confidence-building measures and economic incentives aimed at “shrinking the conflict” are unsustainable. The war in May 2021 made clear that when they so desire, international actors can pressure Israelis and Palestinians and achieve results. The world should not wait for the next escalation to put this into practice.

Dana Landau is a senior researcher focusing on mediation and peace processes at swisspeace, the Swiss Peace Foundation. She teaches political science at the University of Basel.

The op-ed was published in The Security Times in February 2022.