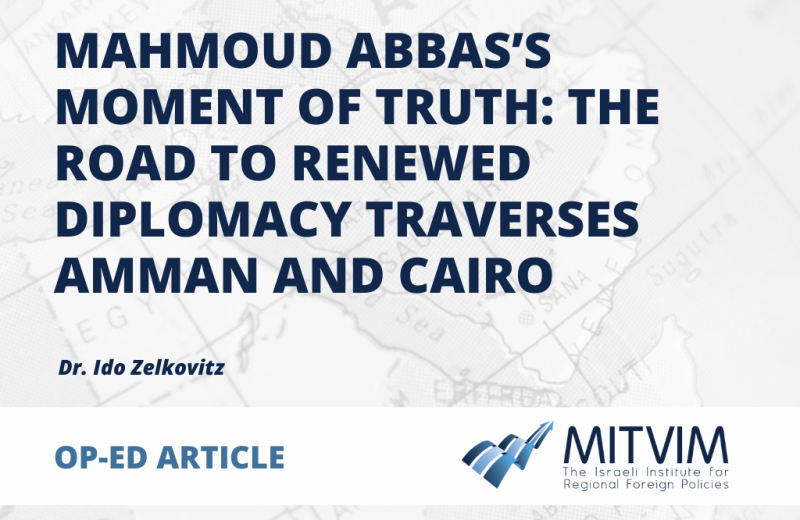 The recent meetings between Palestinian Authority President Mahmoud Abbas (Abu Mazen) and Defense Minister Benny Gantz, and the trilateral meeting several days later between Abbas, the King Abdallah of Jordan and General Sisi the President of Egypt signal the return of the Palestinian issue to the forefront of the diplomatic agenda.

The Palestinian leader’s first formal meeting with a top-level Israeli minister in more than a decade was held at a particularly sensitive political moment for both sides. The Palestinian Authority is consistently losing public support, President Abbas is perceived as an authoritarian leader holding onto power by dint of his ability to impose sanctions and his heavily armed security forces, and many Palestinians blame him for the failure of his strategy to achieve Palestinian independence by diplomatic means.

The Palestinian Authority failure in the diplomatic arena is particularly egregious given the Hamas movement’s challenge to its rule. In the absence of negotiations, Hamas has devised an alternative modus operandi, which while not advancing the quality of life for residents of Gaza, paradoxically bolsters popular support for the movement. Hamas is positioning itself successfully as the heir to Fatah in leading the armed Palestinian struggle against Israel, honing the message that armed struggle is the only way to achieve Israeli concessions. The Hamas policy proved effective during Operation Keeper of the Walls (May 2021), helping it link the distress of the enclave’s residents, which Abbas has tried to isolate, with developments in East Jerusalem and the West Bank, and even sparking violence by Israel’s Palestinian population.

The attacks to which Abbas is being subjected by his domestic rivals in the Fatah movement and by Hamas require that he take action to bolster his standing as President of the Palestinian Authority. Israel has a vested interest in strengthening his standing, greatly eroded during the Netanyahu years, but the complex makeup of the government coalition are not conducive to renewed negotiations on a permanent status solution with the Palestinian Authority. Renewed negotiations would invariably result in a speedy dismantling of the Israeli coalition and renewed elections. This was the backdrop for the Abbas-Gantz meeting, which was to all intents and purposes political-diplomatic in nature although it was portrayed publicly as a discussion of civilian-economic issues. In fact, the discussion dealt with a series of security and diplomacy issues that take on special significance given the protests against Abbas and weakening PA control over certain areas of the West Bank. This unraveling control stems not only from the absence of a diplomatic horizon but also from the economic crisis undermining the Palestinian Authority.

The renewed Israeli-Palestinian dialogue is also of significance to regional stability, especially at a time of growing security instability with Gaza and the ongoing campaign to stem the coronavirus spread. Renewed negotiations against the backdrop of the change in administrations in Washington are also important for generating fresh winds of hope. Israel’s willingness for a dialogue channel is manifested, inter alia, in its offer of a loan to tide the PA over a rough patch. Nonetheless, Abbas is aware of the heavy criticism against him on the Palestinian street, intensified since renewal of the dialogue with Israel, the ongoing security coordination with Israel and his refusal to undertake reconciliation measures with Hamas invariably resulting in elections to the Palestinian national institutions and parliament. In response to the criticism, Abbas has adopted an aggressive tone in the discourse on Israel both domestically and in international forums, led primarily by Palestinian Prime Minister Mohammad Shtayyeh and Abbas’s Fatah movement deputy and Tanzim leader Mahmoud al-Aloul.

The most effective way for Abbas to try nonetheless to enter into discourse with Israel involves a joint front with Jordan and Egypt, both troubled by the rise of political Islam and strengthened position of Hamas. Abbas is aware of the need to form a united front with King Abdallah and President al-Sisi. He does not want to find himself isolated once more, as he was by the signing of the Abraham Accords. Jordan and Egypt could open doors for the Palestinians with the international community, which has despaired of the Palestinian unwillingness to adopt more flexible positions on the launch of negotiations.

It is incumbent on Abbas to take pragmatic steps to ensure the stability of his regime in its waning years given the threats to the PA not only from the rise of Hamas but also from battles of succession within Fatah, its economic downturn exacerbated by the coronavirus, and the despair of the younger generations for all of the above reasons.

Forging a united Palestinian-Jordanian-Egyptian front to promote renewed dialogue with Israel and commit to unconditional support of the two-state solution could once again place the Palestinian issue on the desks of international decision makers. Such a course also serves Israel’s interests, with Egypt leading humanitarian and economic measures to ease the distress of daily life in Gaza and freeing it from having to adopt such measures itself and risk domestic criticism.

Such a move also serves the Palestinian interest and bolsters Fatah’s standing versus Hamas. Abbas is nearing the end of his rule and has nothing to lose. Having realized that the Arab world of the 21st century is no longer committed to pan-Arab slogans and no longer willing to wait for resolution of the Palestinian issue as a condition for normalization with Israel, it is incumbent on the PLO leadership to make a difficult decision. Should it return to the negotiating table and try to achieve an end to the conflict and establishment of a Palestinian state within the 1967 borders, or should it maintain the status quo, which could eventually sink the moderate Fatah forces and pave the way for others to replace them. Israel has an interest in bolstering moderate Fatah forces in the PA in the face of the militant, religious Hamas position. Continued confidence building measures with the PA, especially in economic and civilian areas, could encourage continued dialogue on diplomatic issues, too. This is clearly in the interests of the region because strengthening the PA at the expense of Hamas would help strengthen further the alliance with moderate Sunni states in the face of the Iranian threat and Iran’s entrenchment efforts in our region.