Multilateralism is the key to peace 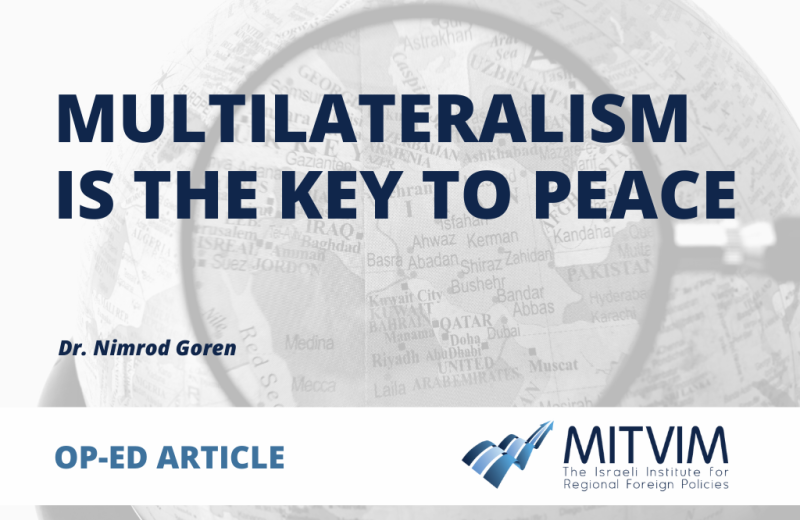 ‘It is worth remembering,” Prof. Elyakim Rubinstein wrote five years ago on the 25th anniversary of the Madrid Conference, the multilateral event that launched the Israeli-Arab peace process of the 1990s. Rubinstein, who served at the time as head of the Israeli delegation to the bilateral talks with Jordan and the Palestinians, stated that the conference “was the start of all the diplomatic moves that ensued, and in that sense constituted a historic milestone.”

However, the Israeli public memory of the 1991 Madrid Conference, to the extent that it even exists, often focuses on the blistering speeches delivered by Israeli and Arab speakers – speeches bearing no resemblance to the tidings of peace that emerged following Yitzhak Rabin’s rise to power in 1992. Israelis who participated in the conference even like to recall tales of bravery about disrupting the Syrian speakers’ speeches with a noisy banging of spoons against glasses.

Indeed, the Madrid Conference is worthy of being remembered, but in a different light. There is much to be learned from it about advancing peace initiatives, and some lessons are relevant to our times: How global and regional changes create new opportunities for diplomacy and conflict resolution; how a determined US administration can overcome strenuous objections and concoct an international breakthrough toward peace; how a stubborn right-wing Israeli leader can be persuaded to take part in an event opposed to his worldview and how Arab states can display a willingness to engage with Israel even prior to according it official recognition.

This year, the multilateral aspect of the Madrid Conference is particularly relevant to the collective memory of the event. Multilateralism has become a buzzword in the international diplomatic discourse of recent years. It denotes combined action by several countries to achieve certain joint goals. The multilateral discourse gained traction as a counterweight to former president Donald Trump and his isolationist approach toward the rest of the world. France and Germany formed the Alliance for Multilateralism and were joined by 70 countries (Israel was not among them), which called for shared solutions to global problems. The intensification of the climate crisis and the coronavirus pandemic drove in the understanding that the challenges facing humanity require international partnerships. This, in turn, prompted growing international calls to strengthen existing multilateral institutions (with the UN at their head) and to establish new ones, governmental and non-governmental alike.

The Madrid Conference was perhaps the first time Israel enjoyed the fruits of multilateralism. The conference led to the establishment of two negotiating channels – one bilateral, the other multilateral. In the bilateral channel, Israel conducted futile separate negotiations with its neighbors, while the real breakthrough was achieved in the parallel, clandestine talks taking place in Oslo. The multilateral talks were more useful. Some three months after the Madrid Conference, a follow-up conference in Moscow decided to establish five working groups in fields of mutual concern to the countries of the region and the international community – the environment, arms control and regional security, water resources, regional and economic development and refugees. The working groups met regularly until the Rabin assassination and were also attended by countries with which Israel did not have, and does not have to this day, diplomatic relations.
Thus, even before the Oslo Accords were signed, Israel, Saudi Arabia, Kuwait, Tunisia, Qatar and others joined together in a shared working framework. Even now, at the height of the normalization wave, this is not yet happening. Israel, which mostly objected to multilateral frameworks in the past, fearing they would turn into a platform of anti-Israel criticism and pressure, suddenly discovered the fruits of multilateral activity – both in terms of its ability to conduct informal ties with Arab states and in terms of advancing shared interests with international partners.
The multilateral process did not survive the obstacles thrown up in the peace process, although to this day, a regional water framework established within those talks is still active in Oman. In 1997, during Benjamin Netanyahu’s first term as prime minister, the Arab League decided to freeze the multilateral talks, contrary to the position of the US and Russia. An international attempt in 2000 to renew them, before the Camp David summit, failed. Fifteen years after the conference, international civil society organizations led a re-enactment of the event, and 19 years after the conference was convened, MK Ofir Akunis (Likud) called on the US to bring the sides together for a one-time Madrid-style conference that would restore to direct negotiations. Other symposia and events about the Madrid Conference have been held over the years, and are being held this year as well, but in general, the Madrid Conference and the talks it spawned have largely faded into oblivion.
THE 30TH anniversary of the Madrid Conference could symbolize a change, especially given that conditions appear ripe to launch a new regional framework for multilateral talks. “The seeds of the Abraham Accords were sown in the Madrid process,” said President Isaac Herzog at a recent conference of the Truman Institute at the Hebrew University. Indeed, ties between Israel and Arab states have come a long way recently – relations have been established with additional states and even countries that have yet to normalize relations with Israel might be interested in participating in a joint working group with it. Israel, for its part, is taking steps under the leadership of its new government to adopt and implement a multilateral approach. Israel is far less deterred today by multilateral frameworks than it was in the past, and increasingly takes a leading role in them – in the fields of diplomacy, security, energy, environment, public health and more, attesting to a desire to upgrade Israeli involvement in multilateral frameworks and organizations.
The memory and lessons of the Madrid Conference could help the new Israeli government in its efforts to extend the circle of normalization with Arab states, improve Israel’s international standing, and strengthen its role in contributing to global issues. But when taking note of the Madrid Conference and the fruits yielded by its multilateral approach, it is also important to remember that the long-term success of a genuine and broad regional process depends on a context in which Israeli-Palestinian peace is also advanced.
The article was published on The Jerusalem Post, 30 October 2021
Prev
All Publications
Next