Now that we’re rid of Trump and Bibi, what’s next? 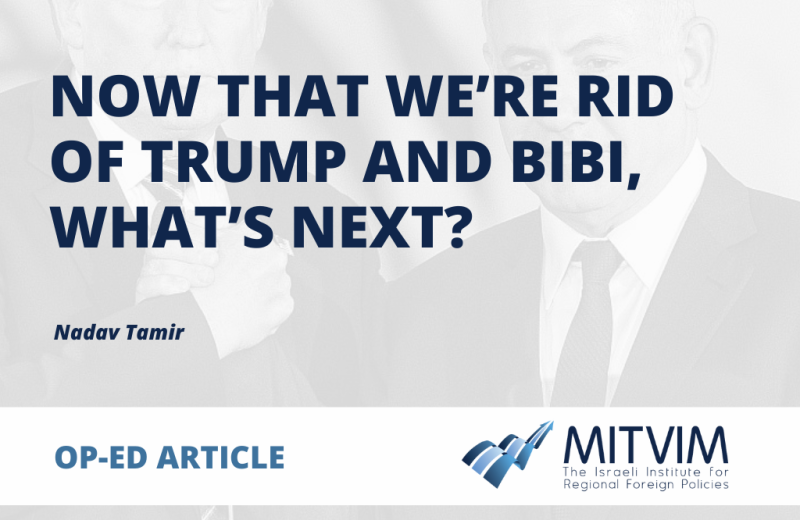 Yes, even left-wing malcontents are sometimes allowed a sigh of relief and sense of pleasure in the return of sanity to our government. But we cannot rest on our laurels because the dramatic political improvement does not resolve the greatest threat to the State of Israel – the Palestinian issue.

Many Americans ask me how I can be so very satisfied with the new government led by a right-wing ideologue, which declares outright that it will not embark on significant moves with the Palestinians. My answer is to ask them to imagine 12 years under a harmful leader such as Trump, but far more sophisticated, who is determined to do away with democracy in order to remain in power. I explain that this outcome was scuttled by a determined public campaign and rare cooperation among a wide variety of parties and groups that came together despite their different agendas in order to save the state.

I then add that we in the peace camp have many allies in the government after years of having none. That the new government includes nine women and 10 women directors general of government ministries. While still insufficient, it’s the best gender balance we’ve ever had. This is a government that includes an Arab party, for the first time, albeit one not guided by the liberal values we would have liked to see. A government open to the liberal streams of Judaism. A government trying to renew Israel’s alliance with the US Democratic Party and with liberal governments in Europe, and, of course, to prioritize links with the American Jewish community ahead of ties with nationalist populists in the US and Europe.

This is a government whose foreign minister, for the first time in Israeli history, is also its dominant political figure and can therefore give diplomacy the place it deserves in Israel’s national security as it strives to prioritize negotiated solutions. A foreign minister who immediately upon taking office set about rehabilitating relations with Jordan, Brussels and Washington. A government whose members come to their office to work rather than to stir up discord and prop up a cult of personality aimed at saving a corrupt leader from legal proceedings – as was the case in recent years.

I have also been asked why we are so pleased with the changing of the guard in Washington even though the Biden Administration has made clear that the Palestinian problem is hardly its top priority. Well, after four years during which Trump spared no effort to turn the US into a third world country, which does not believe in science nor in its duty to lead the free world, it’s hard not to be impressed with Biden’s leadership. His moves on important domestic issues, such as the coordinated campaign against Covid-19 and ambitious plans to save the economy and make it more equal and environmentally sustainable. His determination to renew alliances with liberal democracies. His global leadership on climate change, which is obviously the greatest challenge facing humanity. Yes, refreshing, joyous sanity has also been restored across the ocean.

On the other hand, we must not allow our satisfaction to divert us from our mission – saving Zionism from the malignant status quo of continued occupation leading us to a binational state and to the moral and strategic elimination of the Zionist vision. There is much we can do even under the new governments in Israel and the US which, while having much to commend them, are not seized with a sense of urgency to resolve our existential threat.

Sadly, there are no prospects of a breakthrough in bilateral Israeli-Palestinian initiative, not only because of the neutralizing balance of the Bennett-Lapid government, but also because of the Palestinian leadership crisis. There are many reasons why Mahmoud Abbas (Abu Mazen) and the Palestinian Authority (PA) have sunk to such unprecedented lows. The corruption that has spread throughout the PA and the obstacles to any attempt to instill democracy certainly play a role. But the weakness is linked no less to the fact that Abu Mazen’s willingness to achieve an independent state without resorting to violence came up against an Israeli side uninterested in agreement and preferring to bolster Hamas. By definition, anyone ignoring the pragmatic forces strengthens fundamentalist ones. That has been Israel’s approach toward the PA for many years and this is the poison fruit it has cultivated.

Despite all of the above, the international community can create a new tangible, concrete vision of a two-state solution in tandem with activity to strengthen moderate elements on the ground and prevent unilateral measures hampering a solution once conditions are ripe.

The Quartet (the US, EU, UN and Russia), together with Arab states that have diplomatic relations with Israel and with the help of other important countries in the world and the region, such as Saudi Arabia and China, could advance a UN Security Council resolution setting parameters for a permanent status agreement that would serve as the basis for negotiations once they become feasible.

Such parameters could include, inter alia, the international consensus on the 1967 lines as the border between Israel and Palestine with land swaps to be agreed in negotiations. The Palestinian capital will be in East Jerusalem and special arrangements will be made for the Holy Basin under international auspices. The settlements excluded from the land swaps will be vacated, or their residents could decide to remain there under Palestinian sovereignty. The solution to the refugee problem will combine a return to the Palestinian state and rehabilitation and equal rights for refugees who choose to remain in Syria and Lebanon. All of the above subject to security arrangements guaranteeing Israel’s security, such as a demilitarization, early warning systems, and more.

Based on these parameters, the international community will recognize a Palestinian state and also declare an international consensus recognizing Israel as the nation state of the Jewish people whose non-Jewish citizens enjoy full equality, de facto.

Such an international move would also affect domestic Israeli and Palestinian politics. Hope of a diplomatic solution would weaken the radicals and strengthen the pragmatists. The public on both sides, most of which backs the two-state solution but does not believe it is feasible will have their faith in peace restored and vote accordingly. Once political conditions are ripe for a return to negotiations, we will not have to start from scratch.

Israeli and Palestinian peace advocates have an important role in influencing the international community to advance such a move and refusing to abandon the vision of peace despite the current difficulties. It’s possible to be pleased with the favorable changes in the US and Israel, but not to fully satisfied. The energy that led to the hoped-for changes in the US and Israel must be translated into a move that saves us from despair. Leadership is the ability to combine a critical mind that identifies what needs to be done with a hopeful heart that believes change is possible. Let us become leaders on the road to peace.