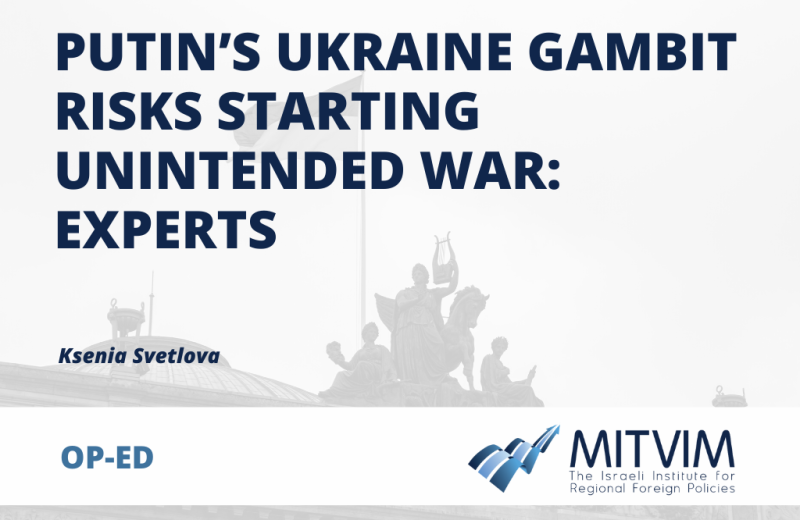 ‘For now, Putin is getting exactly what he wants: The West is already making bargains with him,’ expert tells The Media Line

As American diplomats leave their offices in Kyiv, NATO soldiers deploy in the Baltic states and Israel prepares to evacuate Ukrainian Jews, it feels like war between Russia and Ukraine is just around the corner. But is another Russian-Ukrainian war truly inevitable? And what role is the media playing in heating up the already charged atmosphere?

‘Kyiv feels a lot like Tel Aviv these days’

“Personally, I’m not engaged in preparations for a war that might or might not happen. Call it a matter of superstition. Life in Kyiv goes on – the cafés are full, everything is open,”

Evgeny Kiselev, once a Russian TV star and a pioneering journalist who was not afraid to criticize the political elite, tells The Media Line. Since 2008, he has been living in Ukraine, where he presents a popular political talk show.

“In this way, Kyiv feels a lot like Tel Aviv: The Gaza Strip is just a few dozen kilometers away and the rockets launched from Gaza can explode at any moment. But people still enjoy the sun and life,” he continues.

“We do the same. At the same time, some people are worried about a possible invasion, and some are even packing – just in case. If the worst scenario comes true, they might leave Kyiv and go west, to stay with friends and relatives. However, Ukraine has seen many occupiers, but no one was able to swallow it. Even when it was a part of a Russian empire, it still succeeded to maintain its culture and identity,” Kiselev says.

Anna Zarova, CEO of the Israeli-Ukrainian Alliance (IUA), an “international company focused on the enhancement of social, business and investment relations between” the two countries, just returned to Israel from Odessa.

Zarova told The Media Line she didn’t feel any anxiety among the residents of the city. “It was as if I ended up in a parallel reality. My Israeli friends were very worried about me, but in Odessa, I didn’t see any signs of impending war.”

Dr. Evgeni Klauber, an expert on former Soviet Union countries who teaches at Tel Aviv University, points to an interesting fact. “Look at Ukrainian top military leaders. They are not in Ukraine, they are abroad – meeting and convening with foreign leaders. If they really thought that an invasion was imminent, they would rush home to be with the troops and to prepare for the war,” Klauber tells The Media Line.

The news that dependents and all nonessential US Embassy staff were evacuating Ukraine was greeted with a great deal of astonishment. “It seems that the Americans exaggerate and even inflate the situation, perhaps in order to praise themselves and President Biden later,” says Kiselev.

Klauber explains, “We do experience a great deal of exaggeration, and even fake news.”

He believes the media are creating an atmosphere of fear and hysteria instead of dealing rationally with an analysis of the situation.

During the last few months, experts and analysts have laid out various scenarios for a possible war, from Russia taking over additional swaths of the Donbass region in the southeast to it occupying Kyiv, Ukraine’s capital and largest city.

In Ukraine, however, many believe war is not a done deal, at least not yet.

“The threat of war is worse than the war itself: In order to carry out an offensive operation of this scale, [Russian President Vladimir] Putin actually needs not 100,000, but 200,000 to 300,000 troops amassed at the border,” says Kiselev.

“For now, he is getting exactly what he wants: The West is already making bargains with him. It’s clear to all that the terms that were presented by Russia in December are a nonstarter. Therefore, all of this is being done for propaganda purposes: Russia fears for its security, and NATO is sending ammunition and planes [to Ukraine],” Kiselev adds.

According to Klauber, war in Ukraine might happen as the result of a violent dynamic in the self-proclaimed republics in the eastern part of the country, but a full-scale war or even a partial occupation of Ukraine is just not part of the Russian president’s agenda.

“Also, [Ukrainian] President [Volodymyr] Zelensky knows that Putin does not intend to attack,” he continues.

“Putin wants to create pressure on Zelensky. While everyone is stressed because of the concentration of 120,000 Russian soldiers at the border, people tend to forget that just a few months ago, in September, some 250,000 [Russian] soldiers participated in a military drill in that area. There was also a similar movement of troops in March 2020. The current drill is a third of one during the last 12 months, and for the meanwhile – the smallest in volume,” Klauber says.

“I tend to believe that Putin is not interested in taking over parts of Ukraine. He simply wants it all, but without rows of tanks on Ukrainian land and hundreds of dead soldiers returning home in caskets. His goal is the miraculous revival of the Minsk agreements,” he says.

The Minsk Protocol and the Minsk II accord, which sought to end the war in Ukraine’s Donbass region, were signed in 2014 and 2015, respectively.

“Many parts of these agreements were never implemented, and the Ukrainians refused to stand by them. Now, when the threat of war has become more real, Kyiv has started speaking about implementing some parts of the agreement, and this is a considerable gain for Putin,” Klauber explains.

The world (and the Middle East) is watching

Today, as the world watches closely the tensions between Russia and Ukraine, some countries are already drawing conclusions. This may be true as regards China vis-à-vis Taiwan and even in the case of the Yemenite Houthi movement vs. the United Arab Emirates and Saudi Arabia.

“Despite the war drums and the powerful language (that mainly comes from the US State Department), the West seems to be ready to cave in to Putin – each country for a different reason,” the expert continues.

“Putin is taking a risk here because war can erupt even if he is not interested in it if some of his protégées in Luhansk or Donetsk go rogue, but there is also a chance that he will be able to squeeze the Ukrainians into accepting the Minsk agreements without shooting a single bullet,” Klauber says.

According to Zarova, while the American diplomats are packing their bags, Ukrainians are paying particular attention to what happens at the Israeli Embassy in Kyiv. “There is talk about the possible evacuation of the Jews and of the Israeli citizens who reside in Ukraine, but for now they are staying put and the embassy carries on as usual,” she says.

Zarova, who was born and raised in Ukraine, expects Israel to take a firmer position on the conflict.

“Yes, there is complexity because of the Russian presence in Syria. And yet, Israel can do a lot to help the Ukrainians. In 2014, all the aid that was provided to the Ukrainian people was the doing of volunteers and civil society organizations. Israel did very little. So if it will provide some help of this kind, there will be a positive impact,” she says.

For now, Israelis of Ukrainian origin are watching the situation on the ground closely, Zarova explains. In the event of a ground invasion they will immediately mobilize, to protest and demand that the Israeli government take a stand, she says.

For now, it seems that all sides continue to play the waiting game. It’s unclear how long this phase will last.