The Ministry of Regional Cooperation
and Israeli-Palestinian Peacemaking 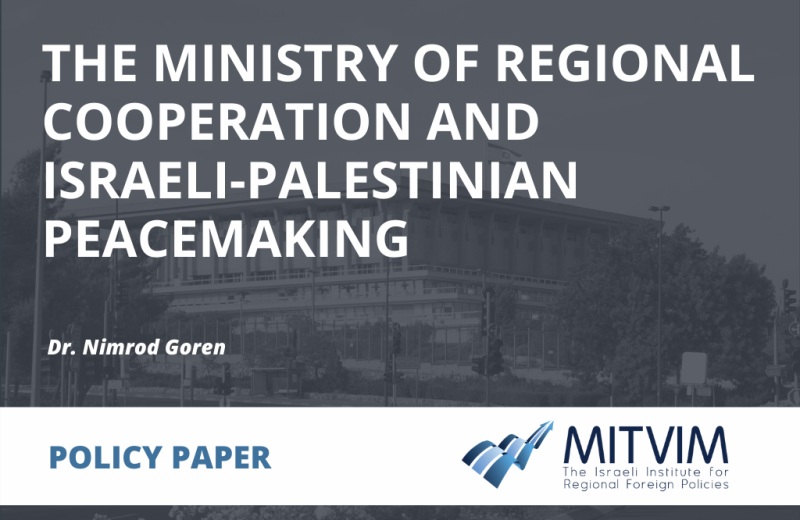 Among Israel’s many government ministries, one stands out in particular. It is small, its authority is limited, and many doubt its need. But it is tasked with realizing one of Israel’s greatest aspirations since its founding: Reshaping relations with the Palestinians and its other Arab neighbors through regional cooperation.

The Ministry of Regional Cooperation was established in 1999 as a product of political bargaining. Then-Prime Minister Ehud Barak sought to find a job for Shimon Peres, the peace advocate whom he did not want as his foreign minister. Peres used the new ministry as a platform to advance his vision of a new Middle East, while Barak led an Israeli-Palestinian peace process.

The Ministry was subsequently shut down (2003), reconstituted in 2009 and has been led since by various Likud party ministers whose agenda did not include advancing a two-state solution. These office holders directed most of their energy to largely futile efforts to advance projects with Jordan. “My ministry was born in sin and should have been shuttered long ago,” declared Likud’s Ofir Akunis upon ending his term as Minister of Regional Cooperation in mid-2021.

The appointment of Esawi Frej of Meretz as Minister of Regional Cooperation in June 2021 was a breath of fresh air. For the first time in years, the Minister heading the office is wholly identified with advancing Israeli-Palestinian peace and relations with Arab and Muslim countries. “The Palestinian issue is the most central to Israel and must receive full priority,” Frej said after taking office. He added that although a 2009 government resolution tasked the ministry with handling key economic components of ties with the Palestinians, his predecessors from Likud had neglected the issue.

Frej announced plans to visit Ramallah and renew the work of the Joint Economic Committee (JEC) with the Palestinians, founded within the framework of the Oslo Accords. His ministry stated that it will “formulate and implement measures to remove barriers and strengthen the economic, civilian, social and cultural ties with the Palestinian Authority (PA) and enhance trust between Israel and the PA”. More specifically, the ministry targets “managing and accompanying infrastructure, environmental, tourism, economic, trade, culture, education and sports projects; initiating investment plans; and identifying and lifting barriers to the movement of goods and people, and in the field of infrastructure”.

The Ministry of Foreign Affairs’ avoidance of significant dealings with the PA left a more open field for the Ministry of Regional Cooperation. During his first six months in office, Frej focused on economic aspects related to the PA and to Israel’s relations with it. These issues were handled in the past by the ministers of finance and the economy. The Ministry of Defense and Coordinator of Government Activities in the Territories (COGAT) continue to play a significant role in this regard. The activity of Frej in this field included moves on the domestic Israeli front and in the international arena, and bilateral steps vis-à-vis the PA.

Within Israel, the Ministry of Regional Cooperation made efforts to raise public and political awareness of the severe economic crisis in the PA and of the need to alleviate it in order, inter alia, to prevent negative repercussions on Israel. Frej raised the issue with Defense Minister Benny Gantz ahead of his meeting in Ramallah with Mahmoud Abbas, promoted Israeli loans to the PA to be repaid from the tax revenues that Israel collects for the PA, spoke publicly of the need to strengthen the PA to prevent its collapse, and declared his intention to encourage Israeli chambers of commerce to accelerate economic activity with the Palestinians and with Jordan.

In the international arena, Frej represented the Government of Israel at a November 2021 meeting of the international donor group for Palestine (AHLC) in Oslo, where he encouraged participants to financially support the PA. Frej also called on foreign businesspeople and corporations to invest in the Palestinian economy, in cooperation with Israel, and held international meetings to discuss economic issues.

The bilateral Israeli-Palestinian moves taken by the Ministry of Regional Cooperation, usually in cooperation with other Israeli government entities, included preparations for renewing the work of the JEC and implementation of the Paris Protocol (the economic annex of the Oslo Accords), issuing 500 work permits for Palestinians in Israeli high-tech companies, expanding the quota of permits for Palestinian construction workers in Israel, attempts to ease the passage of people and goods at border crossings, and support for establishing industrial zones in the West Bank.

Upon taking office, Frej declared that “everything possible must be done – by the government, on the civilian and public diplomacy levels – to bring about the resumption of Israeli-Palestinian negotiations and advancement of the two-state solution”. Indeed, the Ministry of Regional Cooperation appears, to be trying to promote improved economic relations with the Palestinians. While six months are not sufficient time for extensive achievements, the ministry seems to have a set an agenda in this field, which could make its mark in 2022.

However, to make a larger impact towards Israeli-Palestinian peacemaking, the ministry needs to step up its activity in the political-public, policy and civilian fields, including in linking Israeli-Arab normalization processes to the Israeli-Palestinian issue. The ministry has only taken limited action in these fields to date, focusing in 2021 on renewing ties between Israeli ministers (among them Frej, Gantz, Nitzan Horowitz, Tamar Zandberg and Omer Bar-Lev) and senior PA officials, on meetings with foreign diplomats and special envoys, and on calls for local government and civil society funding to create links with neighboring states and the PA. These measures will have to be continued in 2022, in addition to the following new directions:

In the political-public field, Frej should continue to clearly advocate for the two-state solution and for urgent action in that direction. He would do well to ask for periodic hearings on the Israeli-Palestinian issue at the Knesset’s Foreign Affairs and Defense Committee. In addition, the ministry could launch a ministerial forum for the advancement of Israeli-Palestinian peace and coordinate its activities, lead staff work in preparation for the future resumption of the peace process, follow developments on the ground and their effect – whether positive or negative – on prospects of peace, and establish an experts’ forum to formulate recommendations on how to mobilize the normalization agreements with Arab countries for the advancement of Israeli-Palestinian peace (the Israeli Climate Forum, recently formed by President Herzog could serve as an example).

In the policy field, it is incumbent on the Ministry of Regional Cooperation to expand the framework of meetings between Israeli and Palestinian ministers. Specifically, the ministries of foreign affairs, finance and economy, should be encouraged to develop ties with their Palestinian counterparts. Frej and his staff could initiate and facilitate such activity, making sure that meetings between ministers lead to an effective follow-up and produce tangible results. The ministry can also appoint a special envoy for contact with the PA, for example a diplomat with ambassadorial rank on loan from the Ministry of Foreign Affairs. Such an appointment would fill the vacuum resulting from the lack of official ties between the Israeli and Palestinian foreign ministries. Frej could also initiate a joint move with the Ministry of Diaspora Affairs to create a partnership with Jews around the world who are active in promoting peace and ties with the region. During the past decade, such Jewish activists have been often criticized by the Israeli right-wing leadership, and the new government should reach out to them and treat them as partners on the road to peace.

On the regional level, the Ministry should link Israel’s improving ties with Arab states to Israeli-Palestinian peacemaking. Frej should raise the Palestinian issue and its importance in meetings with Arab representatives, work to integrate the Palestinians into the emerging Israeli-Jordanian-Emirati coordination on electricity and water, and meet regularly with international envoys tasked with the Israeli-Palestinian issue. Frej should also encourage other governments to follow in the footsteps of the US and enhance financial support for peace organizations. Moreover, his office should leverage regional frameworks in which Israel and the PA are members – such as the Eastern Mediterranean Gas Forum, the Union for the Mediterranean, UN institutions, and parliamentary diplomacy forums. International organizations often serve as a sparring arena between Israelis and Palestinians; they should be turned instead into spaces for advancing cooperation.

In the civilian field, the Ministry of Regional Cooperation should assist pro-peace civil society organizations. Under the Netanyahu governments, these organizations were often de-legitimized and attempts were made to curtail their freedom. Frej should work to lift barriers, support organizations, help entrepreneurs, ease Israeli-Palestinian shared activities, give visibility to successful projects and influential organizations, and create an ongoing framework for engagement with peace NGOs. The former UN Special Coordinator Mladenov adopted such an approach in his work to advance Israeli-Palestinian peace, and it could serve as a model. This should also be reflected in the ministry’s operations – for example prioritizing project proposals submitted to the ministry that include Palestinian participants, launching small-scale, bureaucracy-free funding for specific activities of peace organizations, and encouraging involvement of Israel’s Arab citizens in promoting peace. The ministry could also help the Israeli and Palestinian Olympic Committees end the exclusion of Israelis and Palestinians from the Mediterranean Games – the “regional Olympics” – and promote a shared event by the Israeli and PA pavilions at the Dubai Expo.

In conclusion, despite the structural limitations in which the Ministry of Regional Cooperation operates, it currently has an opportunity to positively influence Israeli-Palestinian relations and contribute to peacemaking efforts. The ministry is being led, in a rare occurrence, by a minister committed to the two-state solution, who identifies the urgent need to advance the matter, who is attentive to the needs of the Palestinian side, who hails from the Arab population of Israel, and whose staff is well acquainted with Israeli peace organizations. What is more, Frej is serving at a unique time in which political, regional and international circumstances enable the advancement of new initiatives vis-a-vis the Palestinians. Not only in the economic field, but also in the political-public, policy and civilian fields. Advancing such initiatives should be the leading task for the ministry in 2022. While doing so, Frej should make sure that his efforts are not used as fig leaves to cover actions on the ground by the Israeli right-wing that jeopardize the two-state solution.

A shorter version of this article was published by The Jerusalem Post.