Lebanon may be getting tired of Hezbollah- analysis 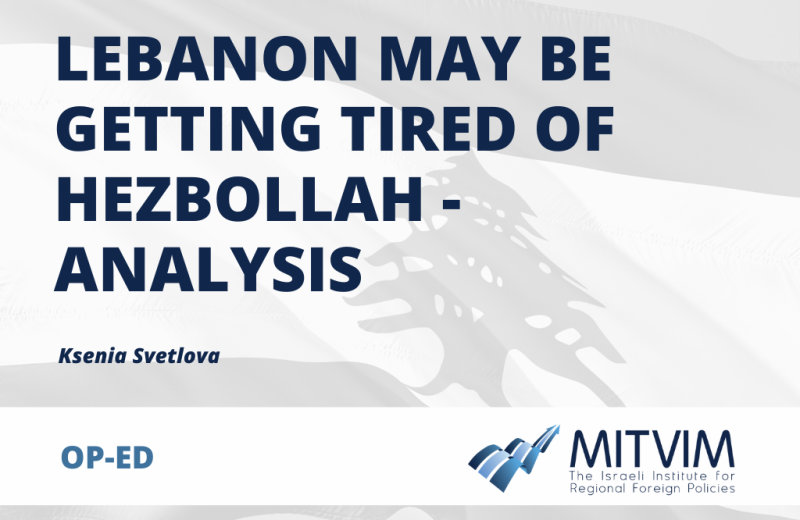 First, it was Gebran Bassil, leader of the Free Patriotic Movement (FPM) and the son-in-law of Lebanon’s President Michel Aoun, who attacked the Shia Islamist political party Hezbollah and said that there would be “political consequences” for its actions against his party as it continues blocking the Cabinet from meeting.

Then Aoun made a similar statement, saying that “unjustified, deliberate and systematic blockage which dismantles the state and drives it to its demise must be ended.” The Cabinet has not met since October.

Aoun’s Free Patriotic Movement is an ally of Hezbollah in the Lebanese parliament and in 2016 he was elected the president due to its support after 29 months of stalemate.

Hezbollah quickly reacted to the Aoun statement by slamming Bassil – who has presidential aspirations when Aoun’s term ends next year – and indicating that Bassil might be losing its support.

Meanwhile, Aoun on Thursday signed a presidential decree approving legislative elections for May 15, 2022, two months later than the current parliament had wanted it to take place.

Experts are questioning whether the leaders of FPM are truly reconsidering their ties with Hezbollah so close to the upcoming 2022 parliamentary elections, and what such recent statements say about the growing resentment against Hezbollah in Lebanon.

“The criticism against Hezbollah is growing fast. Many people are talking about it out loud. The press is very militant these days, and there is also a criticism that is expressed through social networks, namely Twitter. In 2019 (Hezbollah’s) offices were targeted in Nabatiyeh, in the heart of their own base,” Dr. Moran Levanoni, an expert on Syria and Lebanon affairs for the Moshe Dayan Center for Middle Eastern and African Studies at Tel Aviv University, told The Media Line.

“Lately it seems that the resentment is growing, especially after the explosion at Beirut Port. Also, (Hezbollah leader Hassan) Nasrallah promised to provide a solution to the energy crisis, but his attempt to bring oil ships from Iran has failed. He didn’t succeed to do anything meaningful. So, when Aoun says what he says, he aims not only to foreign ears, but also to the domestic audience that is unhappy with what Hezbollah does,” he added.

Pierre Akel, a Lebanese journalist and researcher who hosts the popular trilingual website Middle East Transparent, says that the economic and political crisis has badly hurt Hezbollah’s reputation and popularity.

“I believe that Hezbollah is finished popularity-wise. I appreciate that today more than 80% (of voters) are against them. After all, the Shia Lebanese are hungry like everybody else. Even if they have money in the bank, they can’t withdraw it, as a person can only withdraw up to $400 each month now,” Akel told The Media Line. “The people are poor and when they are going to the pharmacy to buy some milk powder for their children they do not have the dollars to pay, as they are not Iranians and not Hezbollah activists. Hezbollah also had to cut the salaries for its own fighters, but still they are the only ones who have the money. So, there is a class struggle between the rich who are close to Hezbollah’s plate, and those who are lacking everything.”

At the same time, Israeli researcher Dr. Yusri Hazran, a lecturer at the Shalem Center and a research fellow at the Harry S. Truman Institute for the Advancement of Peace at the Hebrew University of Jerusalem, says that despite the recent statements made by Aoun and Bassil, their political alliance with Hezbollah is not over yet.

“The elections are coming up, therefore it’s hard to believe that the words will annul political loyalties and alliances. Also, Hezbollah is not really a part of the traditional Lebanese elites that are to blame for the current economic crisis. That’s the image that the group wants to promote,” Hazran told The Media Line. He added that Hezbollah is determined to prevent a rift with the Christians, which would explain the “limited and measured reaction after the shoot-up in Beirut” on October 14 in which seven people were killed during a protest organized by Shiite groups Amal and Hezbollah to demand the removal of Tarek Bitar, the judge who is investigating the 2020 blast in Beirut. Hezbollah blamed the troops of Lebanese Forces Commander Samir Geagea for the deaths.

“Hezbollah is not interested in igniting a civil war in Lebanon, neither do they want responsibility for a failed state,” Hazran said.

For years Hezbollah relied on the socioeconomic structures that it created in Shia-populated areas in order to increase its popularity and support among its poor and deprived base. Charities, free clinics and educational facilities for children were created in places that had been neglected by state authorities for many years. It gave small loans through its financial arm, Al-Qard al-Hassan, and as the economic crisis became worse it made help available to other communities and not only to Shiites. However, lately, the harsh economic realities in both Iran and Syria and the push by the United States against the group in South America have created a cash problem for Hezbollah. Some question whether the movement will be able to continue operating its many socioeconomic services to maintain its popular support.

“Lebanon needs seven oil tankers every 10 days. We are talking 30 tankers per month. Nasrallah brought one,” said Akel, who is based in Paris and closely follows developments in Lebanon. Akel says that the group no longer has at its disposal the sums of money that it used to enjoy before.

Levanoni says that for now, the socioeconomic structures are still holding.

“Hezbollah heavily relies on the illicit economy, namely the drug operation that they are running together with the Syrians. So those who are close to Hezbollah do enjoy some aid, including fuel for generators and subsidized drugs, loans, etc. Of course, these measures won’t solve the problem entirely and the situation is very grave,” he said.

The experts are pessimistic about a possible change in the political equation in Lebanon.

“Who can perform a revolution? Only a person who had breakfast that day. I will be very surprised if the current developments will change the situation significantly. Hezbollah is losing support, but for now, it’s not enough to squeeze it out,” said Levanoni.

Meanwhile, Akel, as well as many people in Lebanon, feel that the recent statements by Aoun and his son-in-law were merely an act of hypocrisy.

Jonathan Spyer, an author and Mideast analyst who is a fellow at the American think tank Middle East Forum, believes that Aoun’s statements were indeed significant, even if no immediate confrontation follows.

“The Islamic Revolutionary Guard Corps’ strategy of implanting ‘Hezbollah’s’ in Arab countries has the flaw that it tends to produce social and economic failure. This is most apparent in Lebanon right now and Aoun is clearly trying to offer a counter-trend to this, advocating repair of relations with Gulf Cooperation Council states. At the same time, neither Aoun nor others not allied with Hezbollah forces cannot and will not offer a frontal challenge to its core strategic path regarding its function as an element of Iranian regional strategy,” Spyer told the Media Line.

For now, the parliamentary elections in Lebanon that are scheduled for next year will be the first vote since the popular protests were launched in 2019. Currently, there is little certainty that they will take place as planned and that the Lebanese who are tired of a failing economy and endless fights between corrupt politicians will be able to cast their votes and choose a better future.