Thoughts on the Postponement of the Palestinian Elections 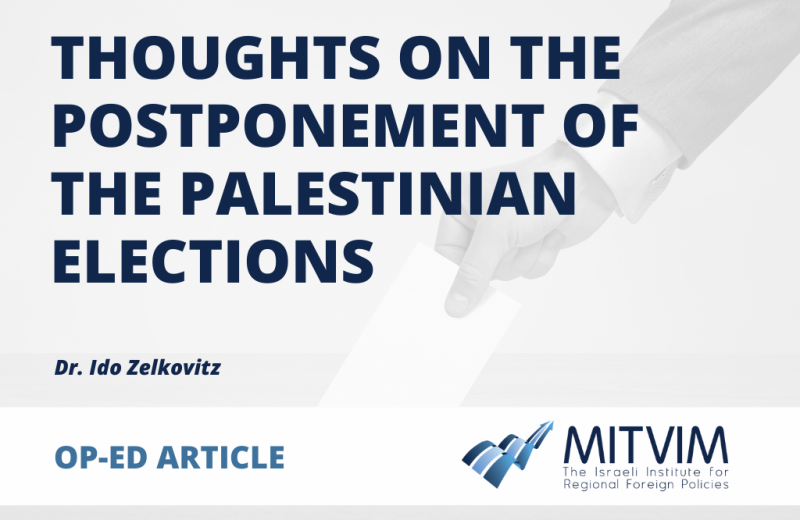 When Mahmoud Abbas was elected Palestinian Authority (PA) President in 2005, many regarded him as the harbinger of democracy and full independence for his people. However, a year after his election, Hamas defeated Abbas’ Fatah movement in the June 2006 legislative elections. A year later, Abbas lost Gaza to Hamas, and never got to visit it as President. He failed to institutionalize a stable democratic regime, and now appears nearing the end of his term. Abbas’ cancellation of the scheduled Palestinian elections proves that his current attempt to realign the Palestinian political system has been dealt a blinding blow.

The announcement by Abbas, on 15 January 2021, of elections to the Palestinian parliament, presidency and PLO institutions, to take place between May and August 2021, surprised the regional and international community. Abbas and his associates viewed the leadership change in Washington as an opportunity to restore relations with the US. After being ostracized by Trump, the PA believed that announcing elections and undertaking a democratic process would build trust with Biden.

The intention to hold elections was also prompted by domestic needs. Since his term ended officially in 2009, Abbas has been running the PA using executive orders. The ongoing division between the West Bank and Gaza Strip and absence of elections to the PA’s institutions have gradually eroded his legitimacy. Public support for Abbas has declined continuously, a situation exacerbated by the prolonged stalemate in negotiations on establishment of a Palestinian state and by the global coronavirus crisis that affected the PA, too.

The announcement of general elections was well received among Palestinians, especially by the young generation that grew up under an authoritarian political system and was deprived of the right to participate in national elections since 2006. The expectations Abbas created by setting election dates generated a sense in the Palestinian political arena that national reconciliation between Fatah and Hamas was also at hand and that Palestinian society was heading for a true process of democratization.

These sentiments were bolstered by the understandings reached between Hamas and Fatah on the elections, and the conciliatory messages emanating from talks led by Jibril Rajoub with the heads of the various Palestinian factions. These talks even included a September 2020 meeting in Turkey between Rajoub and Hamas leaders Salah Al-Arouri and Ismail Haniyeh, to discuss a joint campaign against normalization between the Gulf States and Israel.

Abbas felt that he was embarking on the election process from a position of strength. The PA had become increasingly authoritarian and centralized and its security agencies were mobilized not only to thwart the development of Hamas infrastructure in the West Bank but also to oppress Abbas’ political rivals at home and curtail free speech.

However, despite the power emanating from control of the Palestinian agencies in the West Bank, Abbas’ political party is plagued by splits and internal power plays. Unlike previous announcements of impending elections (that never materialized), this time Fatah found itself split into three different factions. Abbas’ inability to unite with supporters of Marwan Barghouti and of Nasser al-Kidwa, both of whom have decided to challenge him, attests to the de-facto launch of a war of succession undermining the authority of the 85-year-old leader. The challenge by Barghouti was a warning to the Fatah leadership, and Abbas’ failure to forge a unified coalition points to the weakening of his standing within Fatah and to the twilight of his rule.

The decision to cancel the elections stemmed from substantive concerns by all the Fatah factions over losing to Hamas. The divisions within Fatah and the personal rivalries within its factions contrasted with the united front Hamas presented ahead of the scheduled elections. To avoid embarrassment, Abbas chose to delay the elections, pointing an accusing figure at Israel for preventing the voting by refusing to allow the participation of East Jerusalem residents. Abbas is also blaming actors in the international arena, such as the EU, for not exerting sufficient pressure on Israel to allow voting in East Jerusalem. Abbas’ move and argumentation generated anger among European decision makers.

Unlike Fatah, Hamas learned the lessons of the 2006 elections, but it has also failed along the years to manage the Gaza Strip in the face of ongoing cycles of violence, a prolonged humanitarian crisis and the results of the coronavirus epidemic. Despite the desire to integrate into PLO institutions, Hamas is not keen to take on the running of daily life in the PA at this stage, and would actually be happy to drag the PA into the Gaza Strip in order to share with it responsibility for the ongoing crises there.

It should therefore come as no surprise that Hamas opted for a measured response to the election delay. It avoided direct attacks on the PA, but at the same time complained that the PA had gone back on previous agreements and warned that the Palestinian political arena could not remain subordinated solely to Fatah interests. Like Abbas, Hamas focused its reaction on Jerusalem. The movement urged young Palestinians to learn from the successful popular struggle they mounted in the city during this month of Ramadan and continue clashing with Israeli security forces, but at the same time to intensify political efforts to achieve internal reconciliation and unity. Hamas has responded differently to Israel and to the PA over the scrapping of the elections.

While billed as a delay in elections, no one is under any illusion that they have been scrapped. Abbas’ reluctance to introduce political reform and move toward reconciliation with Hamas has led the Palestinian political system to the brink of chaos. The elections delay and the events that preceded it signal that whereas most of the attention was focused until now on the Fatah-Hamas power struggle, the impact of the internal Fatah turf wars on decision making at the national level is just as significant. The developments clearly indicate that the entire Palestinian political system has begun staking out positions for the day after Abbas.

When that day arrives, Fatah will have to reorganize and institute reforms, to allow the return of key figures expelled from its ranks, such as al-Kidwa (who was banished from the movement during the preparation of candidate lists for the elections) and Mohammed Dahlan. The Palestinian public has thus far been silent over Abbas’ decision upending the voting, but this could be the calm before the storm, allowing anyone who wants to run for the presidency after the Abbas era to prepare his party and camp for the moment of truth.

Israel must familiarize itself with the in-depth processes affecting the Palestinian society and must respect the desire for change and the democratization process on the other side of the Green Line. These could legitimize efforts by the next Palestinian generation to resume negotiations with Israel and reach historic decisions in the future.