No, Jerusalem is not off the table 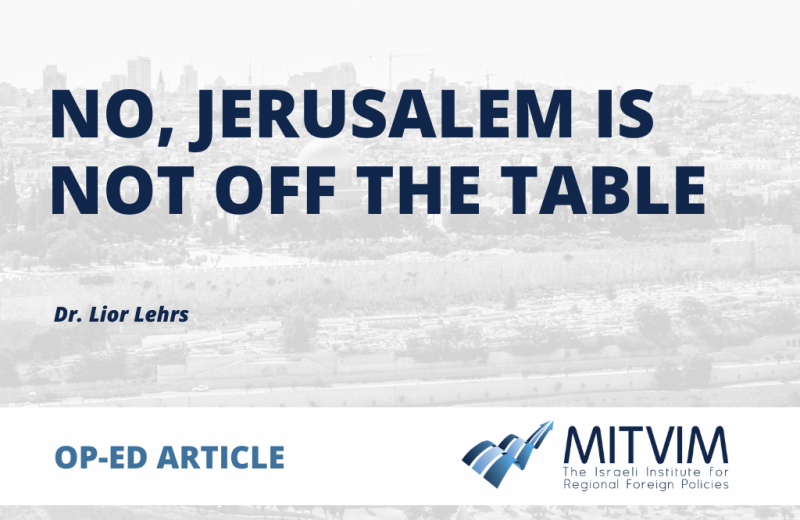 In January 2018, President Donald Trump declared that by recognizing Jerusalem as the capital of Israel, his administration “took Jerusalem off the table, so we don’t have to talk about it anymore.” But Jerusalem is not off the table, as it repeatedly reminds those trying to escape the issue. We have witnessed this in recent days and weeks in East Jerusalem – at the Damascus Gate and the Temple Mount/Haram al-Sharif and in the Sheikh Jarrah neighborhood – as well as during previous rounds of violence in the city, including those in the summer of 2017 (the metal detector crisis) and the summer of 2014 (following the Abu Hadir murder).

Efforts to avoid discussion of the issue have been made repeatedly during the peace process. Authors of the 1993 Oslo Accord agreed the issue was volatile and would be best postponed for future discussion on a permanent status agreement. When talks began on a permanent status agreement, under the Barak government, negotiators were directed to delay discussion of the issue. It finally came up at the Camp David Summit (in July 2000), where it naturally became a major bone of contention. Israel also tried to evade the issue at the 2007-08 Annapolis talks with the Palestinians, with then-Foreign Minister Tzipi Livni under instructions not to talk about Jerusalem. Prime Minister Netanyahu also refused to engage in a serious discussion of Jerusalem during the US-mediated 2013-14 peace talks, insisting repeatedly that the matter was not up for negotiation. Repeated attempts to ignore and delay discussing this sensitive matter undermined negotiations even when leaders were willing to move toward an agreement.

The current round of violence in Jerusalem, just like previous ones, should be analyzed on two levels: The immediate triggers that set it off and the deeper causes arising from the situation in the city in the absence of a political solution to the conflict. The Israeli discourse tends to focus on the immediate causes, discussing tactical aspects and ignoring the structural problems that underpin this explosive reality. East Jerusalemites are orphans. Comprising some 40% of the city’s population, the Palestinian residents nonetheless have no political institutions or representation, no Israeli citizenship (except for a small minority, most of whom are Israeli Arab citizens who moved to the city) and no Palestinian citizenship, and they suffer from discriminatory policies in terms of services, infrastructure and planning. Due to their status as permanent residents, they are not entitled to vote for the Knesset, and while they are entitled to vote in municipal elections, most boycott them (arguing that participation in the election will legitimize the Israeli occupation in East Jerusalem) and therefore the Palestinians have never had representation on the Jerusalem city council.

Over time, an artificial separation has been made in the Israeli discourse on Jerusalem between discussion of “improving the lot of the residents” and dealing with the fundamental problems, but anyone familiar with the hardships in East Jerusalem realizes that the residents’ problems cannot be de-linked from the fundamental anomaly in the city. Much has been discussed over the past decade in Israeli media of the “Israelization” of East Jerusalem Palestinians following construction of the Separation Fence. One can undoubtedly identify a stronger affinity on the part of East Jerusalem residents to the city’s West in terms of employment, education, leisure and entertainment, but these processes are only part of the complex picture in the divided city. Since the events of summer 2014, the government has realized that ignoring East Jerusalem is dangerous, and a decision was made on a five-year plan to bridge gaps (Plan No. 3790). But while one hand is working to promote employment and improve infrastructure, the other continues with evictions, razing of homes and creating a “no man’s land” in the neighborhoods on the other side of the fence.

The case of Sheikh Jarrah is a good example of a dangerous situation stemming from the city’s structural problems. The eviction threat facing Palestinian families stems from a discriminatory legal framework formulated after 1967, which provides Jews with the “right of return” to East Jerusalem land owned by Jews prior to 1948. The Palestinian Jerusalemites, on the other hand, including those evicted from their homes, are barred from demanding a similar return of property owned by their families in the western parts of Jerusalem. This situation undermines the Israeli position against the Palestinian claims to a “right of return” and re-open the discussion on property abandoned in the 1948 war. As has become obvious in recent days, this situation severely undermines Israel’s international standing and threatens relations with its new allies in the Arab world. Right-wing groups, with government support, are taking advantage of the legal framework to promote a process of “Hebronization” in East Jerusalem with a view to thwarting any future solution.

The superficial Israeli political discourse on Jerusalem’s future has boiled the question down to the question of whether the city should be divided, yes or no. But this framing is misleading. The goal of finding a political solution to the city is to recognize fully both its Israeli and Palestinian residents, the existence of both Jerusalem and al-Quds, and to find a path to partnership in the shared city, ensuring political representation and equality for all residents.

A recently published biography of former Secretary of State James Baker (by Susan Glasser and Peter Baker) recounts Baker’s statement upon taking office that he would not deal with the conflict in the Middle East as his predecessor had done, to which diplomat Dennis Ross replied: “You can ignore the Middle East – but it will not ignore you.” The same applies to Jerusalem: Even if the parties to the conflict and the international community try to avoid dealing with this sensitive issue, the problem will not go away and will make its presence felt over and over. Resolution of the problem cannot be delayed further and addressing the situation in the city must relate to both levels – to the triggers of the unrest and to its underlying causes.

In the immediate term, calm must be restored, escalation avoided and dangerous provocations curbed. In this context, diverting the Jerusalem Day Flag Parade from Damascus Gate and the intervention of the Attorney General in the Supreme Court’s session on Sheikh Jarrah evictions were steps in the right direction. Efforts by international actors, including the Biden Administration, to restore calm at the Temple Mount/Haram al-Sharif and block the evictions in Sheikh Jarrah are also welcome. Previous US administrations played similar roles at times of crisis in the city. Secretary of State Hillary Clinton demanded a halt to the eviction of families in Sheikh Jarrah when the issue arose in 2009-2010, and Secretary of State John Kerry intervened to prevent escalation and preserve the status quo on the Temple Mount/Haram al-Sharif in 2014-15. But beyond management of the current crisis, in order to avoid finding ourselves in the same place next time, diplomatic efforts are required to achieve a more substantive change for the long term and an understanding that Jerusalem remains on the table and cannot be ignored.

Jerusalem
Prev
All Publications
Next