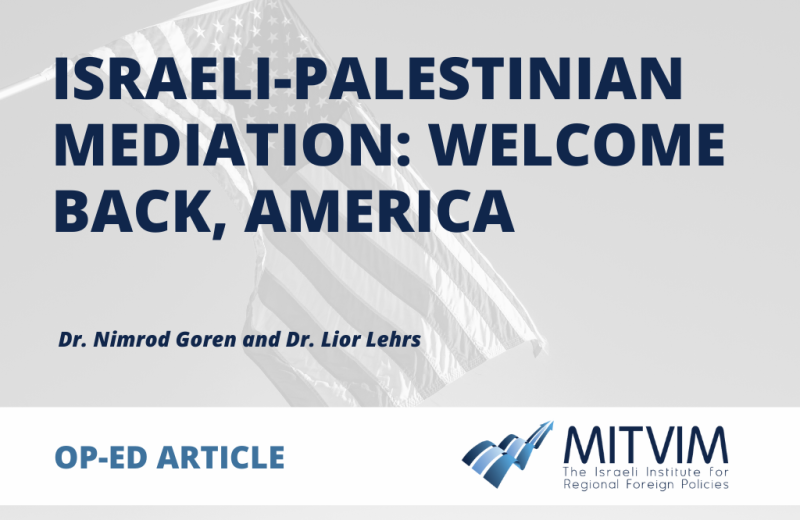 The latest escalation with Gaza illustrates yet again Israel’s vital need for international support to end periodic rounds of fighting with Hamas. As was the case in previous rounds, international mediators were the ones who have just enabled Israel and Hamas to reach a ceasefire. On the one hand, international mediation failed to avert the fighting this time, unlike successful efforts in the past by former UN envoy Nickolay Mladenov; on the other hand, the mediation efforts this time were more effective than during Israel’s Operation Protective Edge in Gaza (2014), which dragged on for 51 days in the absence of mediators acceptable to both sides.

The US played a particularly prominent role in the May 2021 mediation efforts, marking President Joe Biden’s first foray into the Israeli-Palestinian conflict. After signaling for months that the issue was not high on the administration’s agenda, Washington was seeking a win, and wanted to be the one to broker the ceasefire. To achieve this, the US blocked three attempts by UN Security Council members to publish a statement during the fighting and was willing to face criticism on this by key international actors. This criticism was a price that Biden was uncomfortable to pay, as the American conduct in the Security Council contradicted his multilateral foreign policy approach, which speaks highly of cooperation with international organizations and US allies.

Biden nonetheless provided Israel with backing and additional time to continue its military operation against Hamas, at the same time while senior officials in his administration were critical of Israel’s operation (its destruction of the Gaza building housing foreign media outlets, for example), and were issuing statements using new language – that stresses the equal rights of Israelis and Palestinians to security, freedom and prosperity.

The US took the lead in mediation efforts and sought the credit. Biden, Secretary of State Blinken and Secretary of Defense Austin were in constant touch with their Israeli counterparts, and Deputy Assistant Secretary of State Hady Amr was sent on his first visit to the region The US proceeded with its mediation mission in consultation with Arab states. Blinken reported almost daily on talks with his counterparts in Egypt, Jordan, Saudi Arabia, the UAE, Morocco and Qatar. As expected, Egypt was the US ally that eventually nailed down the ceasefire. Qatar, which played a key mediating role in previous rounds of violence, was more marginal this time, as was the UN envoy, who had filled the US vacuum during the Trump Administration. The EU failed, once again, to overcome internal dissent and speak in one voice.

The successful US involvement is good news for Israel. The American absence from Israeli-Palestinian mediation efforts due to the Trump Administration’s rift with the Palestinians, damaged prospects of peace and undermined stability. Biden’s success, for which he was quick to take credit in a special address from the White House, could serve as a springboard for significant American engagement in advancing peace. This round of fighting obviously helped the administration realize the need to appoint senior diplomatic representatives to deal with the Israeli-Palestinian issue, both from the US Embassy and Consulate in Jerusalem and from the State Department in Washington.

In his comments following the ceasefire, President Biden made two interesting points regarding his administration’s future policy. The first was that humanitarian aid and reconstruction of Gaza would be carried out “in full partnership with the Palestinian Authority (PA) – not Hamas.” This clearly suggests the US desire for increased PA involvement and influence in Gaza, and runs counter to Netanyahu’s persistent effort to encourage the split between the PA in the West Bank and Hamas in Gaza, in order to weaken the PA and to prevent the establishment of a Palestinian state. It remains to be seen what impact this US policy will have on the arrangement between Netanyahu and Hamas that included Qatari payments to the organization.

Biden’s second point relates to his vision of the future. While he omitted to mention the term “two-state solution”, to which his administration is committed, he stressed both people’s “equal” rights to security, freedom, prosperity and democracy. This language has been used in several official statements since he took office, offering new parameters that deviate from the traditional discourse on a two-state solution (although they do not contradict or replace it) and reflecting the US commitment to the rights of both sides. Biden argued that “a genuine opportunity” has presented itself for progress in the Israeli-Palestinian arena, and expressed his commitment to seizing it. These remarks contradict the spirit conveyed in the initial months of his administration, which reflected grave doubts about prospects of a breakthrough in resolution of the conflict.

The latest round of fighting underscored the cost of the protracted diplomatic stalemate between Israel and the Palestinians. Peace supporters in Israel, the PA and the US should be encouraged by the US return to its mediation role. As Blinken is touring the Middle East, for the first time as Secretary of State, they should make clear to the administration that its involvement is welcome and necessary, and that it must now advance broader diplomatic moves toward Israeli-Palestinian peace, beyond its commitment to bolstering the ceasefire with Gaza.