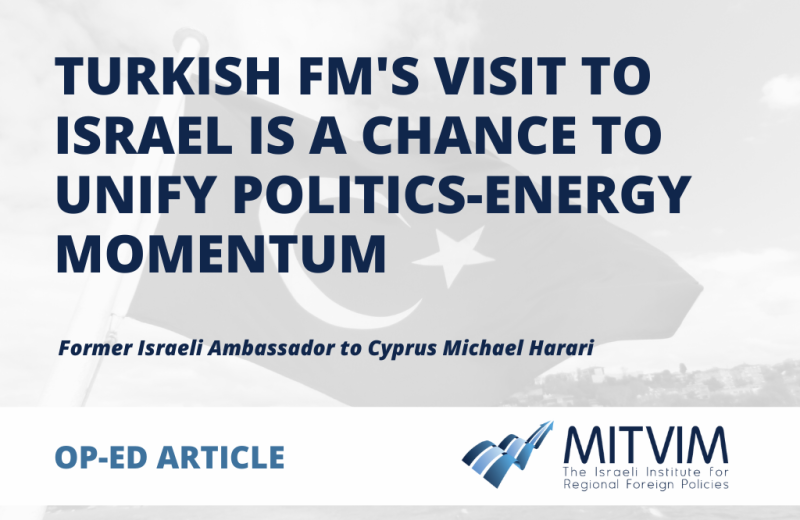 Wednesday’s upcoming visit to Israel by Turkish Foreign Minister Cavusoglu, likely accompanied by Energy Minister Donmez, places the gradually improving relations between the sides on a practical path. One of the key issues on the agenda of the visit relates to energy cooperation, a highly relevant topic for both sides, since natural gas was discovered in the Eastern Mediterranean this past decade. The war in Ukraine has added an element of relevance and urgency to bilateral discussions of the opportunities that lie in cooperation.

President Erdogan has clearly expressed his country’s interest in natural gas imports from Israel, most recently at a March 9 news conference, alongside visiting Israeli President Herzog. Both sides understand full-well the two intertwined aspects of the energy issue: economic-energetic and diplomatic-strategic.

In terms of energy, Turkey’s desire for imported Israeli gas is completely understandable. Turkey imports most of its energy needs – from Russia, Iran, Azerbaijan, Algeria and elsewhere. Generally, about half or more of its energy imports originate in Russia and its desire to diversify its supply sources is understandable. This is particularly germane given the war in Ukraine and the West’s efforts to wean itself from dependence on the Russian energy market.

Turkey seeks to preserve and improve its global positioning by bolstering its standing as a key passageway for energy transport in a shifting geopolitical reality. The natural gas discovered in Israeli EEZ offers a clear energy resource, especially given its location almost next door. The limited economic profitability that undermined previous negotiations on gas purchases from Israel could change, given the newly emerging circumstances.

Both sides realize the diplomatic aspect, as mentioned, is an inseparable part of the economic-energetic one. Israel and other actors in the region took advantage of the prolonged chill in relations with Turkey to consolidate a rather impressive regional architecture, which in essence excluded Turkey from the regional game. Ankara only realized this belatedly and embarked on largely successful intensive diplomatic efforts to improve ties with a series of regional players – Israel, Saudi Arabia, United Arab Emirates and Egypt. Its goal is to reclaim its previous central position in the region and enhance (once again) it standing on the two core issues of Turkish national interest: their relationship with Greece with its myriad disputes, and the Cypriot problem.

The regional structures built in recent years – trilateral cooperation between Israel and the Hellenic states, and between Israel and Egypt, within the framework of the Eastern Mediterranean Gas Forum – have weakened Turkey’s negotiating hand and undermined its regional standing, thwarting its ambition to expand its influence. Nonetheless, Turkey remains a significant regional player, and ignoring it does not bode well for the area’s stability.

Its importance has been highlighted during the Russia-Ukraine war, and the West, particularly the US, have recognized this. At the same time, Israel has made it clear that efforts to improve ties with Turkey would not be made at the expense of the close relationships it has built in recent years with Egypt, Greece and Cyprus. Israeli gas exports thus clash with this stance, at least right now.

HOW, THEN, can this circle be squared in order to move ahead on both aspects of the Israel-Turkey relationship? Following is a package of proposed measures designed to provide momentum and a diplomatic-energetic horizon toward which both sides can proceed.

Each side must lay out its clear interests in a frank, in-depth manner. Israel aspires to move ahead with its relations with Turkey, albeit not at the expense of its strategic relationship with its regional allies – Egypt, Greece and Cyprus. Gas exports to Turkey in the immediate term are not possible (without a shift or progress on the two key disputed issues mentioned above). The reason is fairly clear: The possible routes for shipping gas from Israel to Turkey traverse Cypriot economic waters and Israel would be unwilling at this point to damage the close relationship forged with its neighbor (and within the trilateral Hellenic alliance).

The second possible route goes through the economic water of Lebanon and Syria, and is a non-starter in any case. The renewal of a diplomatic-strategic dialogue between Israel and Turkey is in its infancy, and the disagreements and mistrust cannot be overcome overnight. Turkey strives to integrate into the regional architecture shaped in recent years in a position worthy of its stature. Gas exports from Israel are therefore vital for Turkey, both in energetic and diplomatic terms.

Finding a formula for Turkey’s integration into the regional architecture: Substantial progress in Turkey’s relations with its neighbors obviously cannot be expected at this stage, especially not prior to next year’s elections in Turkey (and Cyprus). At the same time, Turkey’s exclusion from the regional gas forum, a framework that clearly illustrates the new regional architecture, cannot continue. Some sort of formula is required signaling the start of a course correction. To that end, a bilateral mechanism pointing to the direction of relations down the line would be advisable.

This would consist of a series of high-level diplomatic dialogues between Turkey and the states with which it is engaged in smile diplomacy, meaning, Israel, Egypt and Greece (and Cyprus in a more indirect way). Its goal (and branding) would be to examine the most effective way to integrate Turkey into regional activity in a manner serving both Turkey and the region. The desired goal: a serious diplomatic-political dialogue designed to identify practical ways to reverse Turkey’s exclusion from regional activity. Israel could play a key role in advancing such dialogue.

The establishment of an Israeli-Turkish working team in the energy field: The work of such a team should focus on two issues. The first is the question of future Israeli natural gas exports to Turkey. Practical questions must be discussed pending policy circumstances that will enable such exports – what quantities can be expected, how they will be conveyed (pipeline, shipping, liquefaction facilities), their price level, etc.

The second issue with which the team should deal is possible renewable energy cooperation in the immediate-to-near term. The demand for natural gas is high and understandable, but this does not eliminate the green agenda, certainly that of consumers in Europe. As a rule, regional cooperation in the field of renewable energy is perceived as softer, attractive and even practical, in a way that does not require far-reaching understandings (and conditions) at this early stage of the relationship improvement process.

The establishment of a trilateral Israeli, Turkish and European energy working group: Such trilateral dialogue would connect the European Union to the Israeli-Turkish discourse, illustrating Turkey’s central role in the European, energy and diplomatic-political agenda. After all, the EU is the most important player, alongside Washington (and perhaps even more so) vis-a-vis Turkey and the eastern Mediterranean in general.

Ultimately, this is the beginning of a process, albeit challenging and complex, and both sides should be warned that these are not developments and agreements that can be reached immediately. At the same time, it is essential to adopt a work plan adapted to the political reality and political schedule of the relevant players – a plan serving as an engine for combined political and energy momentum.

The op-ed was published in The Jerusalem Post on May 2022.