Why Is the Israeli Left Still Turning a Cold Shoulder to Gulf States? 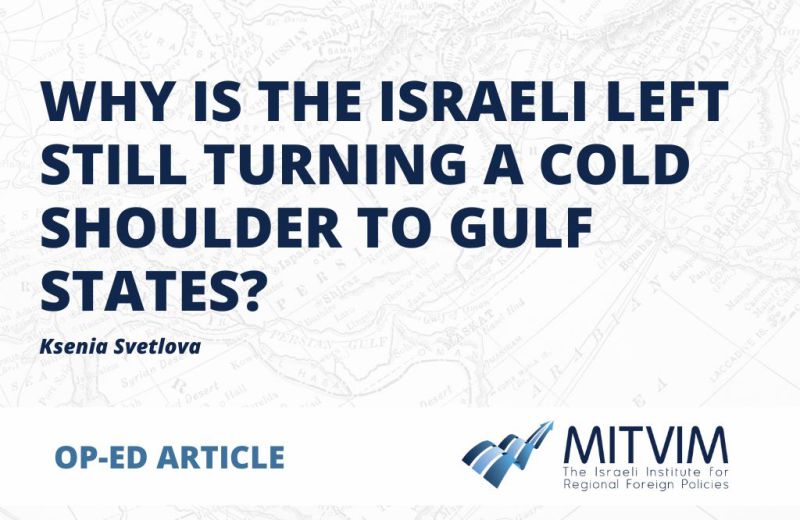 This past April 28, Holocaust Remembrance Day, Dan Feferman stood at the entrance to Auschwitz. With him were the members of the multinational delegation he had brought to the annual March of the Living event in Poland – Saudis, Syrians, Lebanese, Moroccans, Emiratis and Bahrainis. There was also a Palestinian, Mohammed Dajani, who eight years earlier had been the first to take Palestinian students to visit the death camp. All of these travelers were visibly moved.

A visit to Auschwitz “is usually a definitive moment in the Jewish journey,” Feferman, an American-Israeli who is director of communications and global affairs at the Sharaka (“partnership,” in Arabic) NGO, wrote after the visit. But this year, he experienced it “in a dramatically different way, surrounded by Arab Muslims” who had come to learn, to open their hearts and minds and to put their own safety at risk at home in order to teach their societies about the calamity experienced by the Jews in Europe. A few days later, Feferman was in the United States, where he spoke about the peace accords between Israel and the Gulf states with a group of Muslim-American leaders of Pakistani origin.

Sharaka, an Israeli-Emirati organization, was founded immediately after the signing of the Abraham Accords, in September 2020. In the short time since then, the group has brought together hundreds of Israelis and hundreds of Arabs and Muslims from around the world, and not all of them from countries that are signatories to the accords. Its board of directors consists of Arabs and Jews, many of the latter of whom are identified with the Israeli right wing. Among them, for example, are Amit Deri, who heads the organization Reservists on Duty, which clashed with Breaking the Silence in the past; and David Brog, an American Jew who was formerly the executive director of the Evangelical organization Christians United for Israel. Feferman does not term Sharaka a right-wing organization, because, he says, it integrates Israelis from many different backgrounds.

Sharaka’s declared goal is to take advantage of the positive atmosphere generated by the Abraham Accords to forge close ties between Israelis and Arabs and create a common language between future leaders in the Middle East. “People from all sections of Israeli society are showing an interest – young and older, Jews and Arabs, secular and religious,” Feferman, who was an intelligence officer in the Israel Defense Forces, says in a phone call from Ben-Gurion Airport, when he’s on the way to another meeting abroad designed to bring people closer together. “Some of them are skeptical at first, but when they get there they understand what true peace, a warm peace, should look like.”

Like Sharaka, there are many other groups and individuals working industriously in this field, organizing young people who lead delegations, as well as mayors and other senior figures in local governments who pay frequent visits to the United Arab Emirates. The large majority identify with the right. Fleur Hassan-Nahoum, for example, a deputy mayor of Jerusalem who describes herself as a right-center Likud supporter, leads the UAE-Israel Business Council and the Gulf-Israel Women’s Business Forum. Youssef Hadad, a Christian Arab who served in the Golani infantry brigade and became a well-oiled, one-man hasbara (Israeli PR) machine, took part last year in the Holocaust Remembrance Day ceremony in the UAE.

Other examples abound. One of them is the organization Habayit (The Home), whose members include Yishai Fleisher, the spokesman for the Jewish settlement in Hebron. The group, which advocates the application of Israeli sovereignty in the West Bank, seeks to promote what it calls “new political solutions that will make possible acceptance of Palestinians in Israel, not from concessions but from strength.” Its members constantly speak about human rights, though not about civil rights.

In the wake of the Abraham Accords, members of Habayit also arrived in the Gulf and made contact with Emiratis who are sympathetic to Israel. Rudy Rochman, one of the nonprofit’s leaders, is also promoting a project called Sudra, referring to an Ancient Israelite headdress that recalls the Arab keffiyeh, but in blue-and-white.

Twitter and Facebook have also seen the formation of large groups of social media influencers – Israelis, Emiratis and Bahrainis – some of whom proudly style themselves “Arab Zionists.” They are mutually empathetic, talk about coexistence, send one another greetings on the Jewish holidays and express solidarity at times of mourning or terrorist attacks. For example, on the day of the terrorist attack in Be’er Sheva on March 22, an Emirati blogger named Hassan Sajwani tweeted: “Heartfelt condolences, thoughts and prayers with the victims of today’s horrendous terrorist attack that murdered 4 innocent Israelis in #Beersheba, Israel. Prayers for the injured.”

In contrast to the Israeli right, which connected in a natural way with the Abraham Accords and has been working full-steam since to promote partnership with the Gulf states, the left in Israel cold-shouldered the agreements. The initial responses by Israeli left-wing politicians, journalists, commentators and societal organizations offered various reasons for this approach. It’s not a true peace, they said, because we were never at war with the UAE; it’s a dubious deal in which undemocratic regimes are receiving Israeli weapons, aircraft and spyware. Numerous articles have been written about the systematic violation of human rights in the Emirates, which are concealed beneath smiles and a glittering façade. Quite a few spokespersons from the left refused to view the accords as peace agreements because of their mistrust of the leaders who devised them. It’s essentially a business deal, whose main beneficiaries are people close to Benjamin Netanyahu and former U.S. President Donald Trump, they said.

The prism of suspicion and criticism through which left-wingers viewed the agreements at the time of their signing is understandable. However, in the nearly two years that have passed since then, the relationships have developed and grown with content: Trade has increased, and genuine academic and research cooperation has developed. In the past year, for example, trade between Israel and the UAE was valued at $1.2 billion (by comparison, trade with Egypt that year totaled $330 million). Cooperation agreements were signed between universities in the Emirates and Tel Aviv University, the University of Haifa and Reichman University, as well as other Israeli research institutions. At the beginning of 2022, the Israeli government approved creation of a fund dedicated to development of Israeli-Emirati research projects.