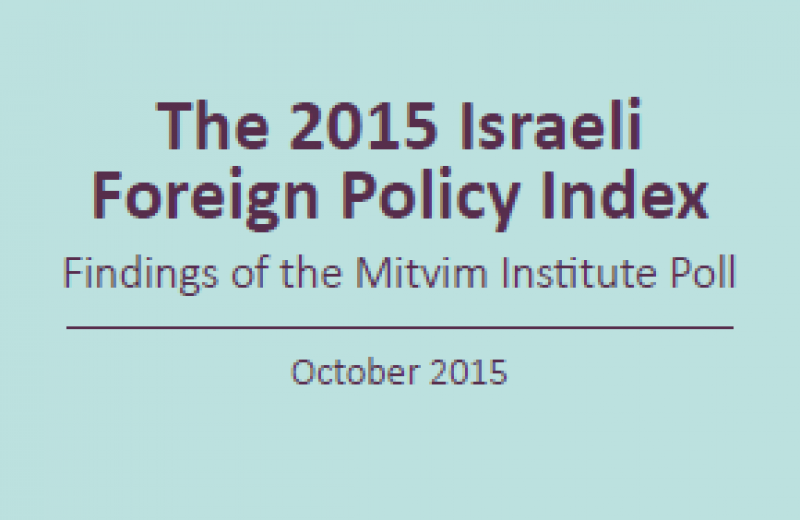 Since 2013, Mitvim – The Israeli Institute for Regional Foreign Policies publishes an annual index covering a variety of issues related to Israel’s foreign policy.  The 2015 Israeli Foreign Policy Index of the Mitvim Institute is based on a public opinion poll conductedin mid-October 2015 by the Rafi Smith Institute and in cooperation with the Friedrich-Ebert-Stiftung. It sampled 600 men and women, as a representative sample of the Israeli adult population (Jewish and Arab sectors aged 18 and older) and has a margin of error of 4%.

• Israel’s international standing is poor, and is significantly worse than it was last year. Most Israelis believe that improvement in this regard is contingent upon progress in the peace process.

• Israelis disapprove of their government’s conduct in matters of foreign policy and think it has deteriorated since 2014. Israelis also believe Prime Minister Netanyahu failed in addressing the Iranian nuclear issue.

• The state of Israel’s relations with the US is viewed as mediocre, and has deteriorated in the past year. Other than the US, Russia is seen as the most important country to Israel in the world.

• The primary reason for Israel to improve ties with Turkey is considered to be the option of promoting security cooperation between the two countries.

• Greater involvement of Arab countries in the peace process is viewed positively and Israelis believe that regional cooperation with Middle Eastern countries is possible.

• The potential of normalized relations with the Arab world is the greatest incentive to achieving peace.

This report includes the detailed poll findings grouped under eight categories: Israel’s global standing; the Israeli government’s foreign policy; the Israeli Ministry of Foreign Affairs and diplomacy; the political sphere; foreign policy priorities; Israel’s relations with the US and other countries; international involvement in the peace process; and regional cooperation and belonging. According to Dr. Nimrod Goren, Head of the Mitvim Institute: “The findings show that the public is losing faith in the government’s foreign policy. We see this in the failure attributed to Netanyahu in his efforts to stop the Iranian nuclear project, in the feeling that Israel’s standing in the world and relations with the US are in a sharp decline, and in the concern about the ramifications of weakening the Foreign Ministry. These are all dangerous trends and to reverse them Israel requires a new foreign policy paradigm, one that will respond to ongoing security threats through regional and international cooperation, as well as the promotion of Israeli-Palestinian peace.”