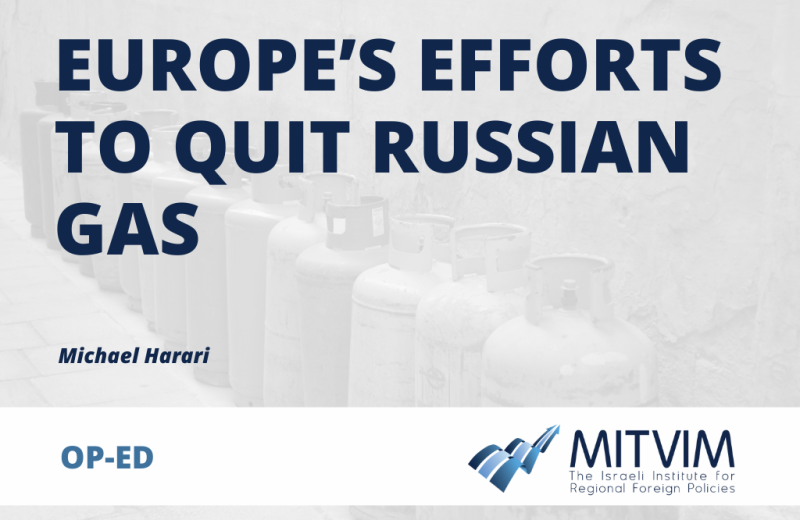 European countries’ efforts to wean themselves off energy dependence on Russia continue. The European Energy Council held a meeting on June 26, during which Energy Commissioner Kadri Simson provided an update on the steps that have already been taken and those that are planned. Simson mentioned that Russia was already taking several measures aimed at harming the European energy market, including the fact that Gazprom had already reduced supplies to a number of countries. Russia also shut down the Nord Stream 1 gas pipeline between July 11 and 21 for what was defined as necessary maintenance work.

As is well known, Germany relies very significantly on the supply of gas from this pipeline. Simson warned that no further steps should be ruled out, even with immediate notice. All this was intended to sow uncertainty, contribute to instability in the European energy market, and concretely prevent Europe from filling its gas storage facilities.

It is especially important to emphasize the great effort that is now being invested in supplying the emergency storage facilities. Today the storage facilities stand at a level of 56 percent, a historic level that has not existed to date. Moreover, Simson warned that not all EU countries are acting with the same intensity, and therefore called on all to act vigorously. Obviously, the capacity to fill the storage facilities depends, to a critical extent, on the amount of gas that Europe manages to purchase and transport to its territory.

The most important player now in the European energy market is the USA. The latter provided a quantity of 12.8 billion cubic meters until last May, which accumulates to an annual quantity of 28 bcm(!). This means European dependence on American (liquified) gas. This is not necessarily problematic; however, it is clear that this is a new variable in the global energy market in general, and in the US-European one in particular, and it may have significant political-strategic implications. Clearly, what needs to be taken into consideration is the Biden administration’s interest in dealing with rising energy prices at home ahead of the mid-November elections.

It is essential to emphasize that European emergency measures are intended on one side of the equation to reduce, albeit gradually, dependence on Russian gas; and on the other hand, no less important, ensure enough energy for the winter. This is a complex equation, which Russia will do its best to disrupt.

In her remarks, Simson called for a series of measures designed to encourage gradual savings in gas use in preparation for winter, emphasized the importance of supplying storage facilities, and listed the steps taken to diversify gas sources to Europe:

• Israel and Egypt – Mentioned the MoU signed recently in Cairo for the export of Israeli gas to Europe through Egyptian liquefaction facilities; Azerbaijan – Work is already under way with Baku regarding the possibility of doubling the amount of gas transferred via the Trans Adriatic Pipeline.

In conclusion it is essential to emphasize:

• European activity to make a strategic change of direction in the energy field is impressive. The EU is implementing extremely complex moves, in particular complicated circumstances;

• Dependence on American liquefied gas is intensifying and certainly significant. It has implications for the transatlantic relationship and, as stated, imposes a responsibility on both parties to meet this equation.

It is quite clear that Russia will try its best to disrupt these moves, perhaps in supply disruptions, and also that it is counting on the fact that energy prices are rising; moreover, Russia is counting on the uncertainty and instability for the winter, which will have an impact – i.e. perhaps crack down on Western solidarity, especially considering support (mainly weapons) to Ukraine.

Global energy prices will continue to be high under these conditions. Even though President Biden succeeded in persuading the Saudis and the Emirates to increase productivity, it is not a matter of being able to add insignificant quantities to the global energy market.