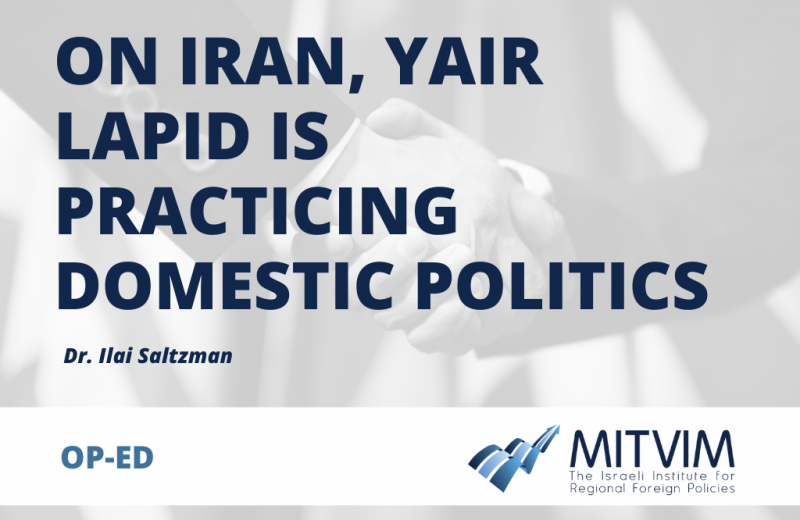 Henry Kissinger famously asserted once that “Israel has no foreign policy, only domestic politics”. Nowhere is this observation more visible than in the conversation inside Israel regarding the recent efforts to revive the 2015 Joint Comprehensive Plan of Action (Iran nuclear deal) and facilitate the American return to the agreement after President Donal Trump unilaterally withdrew from it in 2018.

Considering the fact that Israeli voters will go to the polls on November 1 for the fifth time in four years,  one would assume it is inevitable the Iran nuclear deal will play a major role in the public debate between the various candidates in the coming months. While attentive to myriad social and economic issues, Israelis tend to decide whom to vote for based on the national security situation they face.

A public opinion poll conducted by the Israel Democracy Institute (IDI) in March 2019 found that although 45% of respondents believed the parties’ positions on social and economic will determine how they vote compared to 28% who argued foreign and security matters will affect which party they will support, 30% said it is the national security situation that would determine the outcomes of the elections.

Similarly, a more recent public opinion poll conducted by the IDI in early August 2022 found that a party’s position on the economic situation and the rising cost of living is currently the most important issue determining voters’ party preferences (44% of the respondents). Only 11% said the party’s platform on foreign policy and security will influence their vote but the survey concluded nonetheless that “if security threats increase, then this issue will return to the top of voters’ agendas.”

Beyond the impact the negotiations between Iran and the major world powers will have on Israeli voting patterns, we should also pay close attention to the policy implications of the current debate in Israel. In the past few days, Prime Minister Yair Lapid was engaged in a public brawl with the leader of the opposition and former Prime Minister Benjamin Netanyahu over the current government’s response to the negotiations in general, and the American position in particular.

Under such circumstances, Prime Minister Lapid is finding it extremely difficult to deflect Netanyahu’s efforts to politicize this critical issue and present his government’s practical and coherent policy position. Unwilling to be portrayed by Netanyahu as weak, submissive, and complacent, something that can damage his party’s chances in the forthcoming elections, Lapid is politically forced to display a more aggressive and rigid stance that tragically and paradoxically undermines Israel’s long-term national security.

When Netanyahu attempted to block the signing of the 2015 Iran nuclear deal by publically bashing the European and American negotiators at the time, Israel was purposefully left isolated without any direct access to the content of the talks. Moreover, Netanyahu’s speech against the Iran deal and Barack Obama’s policies in the US Congress resulted in a major rift between the two leaders as well as between the Israeli government and the Democratic Party. To his credit, Lapid is fully aware of that precedent and genuinely seeks to address any disagreements with the Biden Administration discreetly.

However, Lapid is still unable to acknowledge publicly that the American return to the Iran nuclear deal is inescapable given the Biden Administration’s desire to focus on a resurgent Russia in Ukraine and a rising China in East Asia. Calls by the head of the Israeli Mossad David Barnea to impose more sanctions or intensify clandestine efforts to undermine Iran’s nuclear program are anachronistic since Trump’s unilateral withdrawal from the nuclear deal and his “maximum pressure” campaign proved to be exceptionally counterproductive given Tehran was, in fact, able to install advanced centrifuges and enlarge its enriched uranium stockpile. Lapid is also reluctant to admit that having an imperfect agreement that addresses the military dimension of Iran’s nuclear program but not Tehran’s destabilizing policies across the Middle East nor its conventional long-range missile program is far better than having no agreement whatsoever.

Sadly, as a result of his competition with Netanyahu and the unpopularity of the 2015 Iran nuclear deal in the eyes of many Israelis, Lapid is acting more like a politician who is concerned about his electability than a statesman who needs to make the hard decision even if it is unpopular. The classical saying that “politics stops at the water’s edge” was never much applicable to the Israeli case where domestic politics had an overwhelming impact on foreign and security policy, and it is certainly inapplicable to describe the predicament the Israeli government finds itself in while attempting to address one of its most significant national security challenges today.

Hopefully, Lapid will be able to focus on making the right decision about the Iran nuclear deal regardless of the political costs. While Kissinger was right about Israel’s foreign policy, he also warned that “Leaders are responsible not for running public opinion polls but for the consequences of their actions.” Lapid should practice this advice and prove the other observation wrong.