In Hopes of Postponing the Next War, Israel Lets Gazans Back in After 15 Years 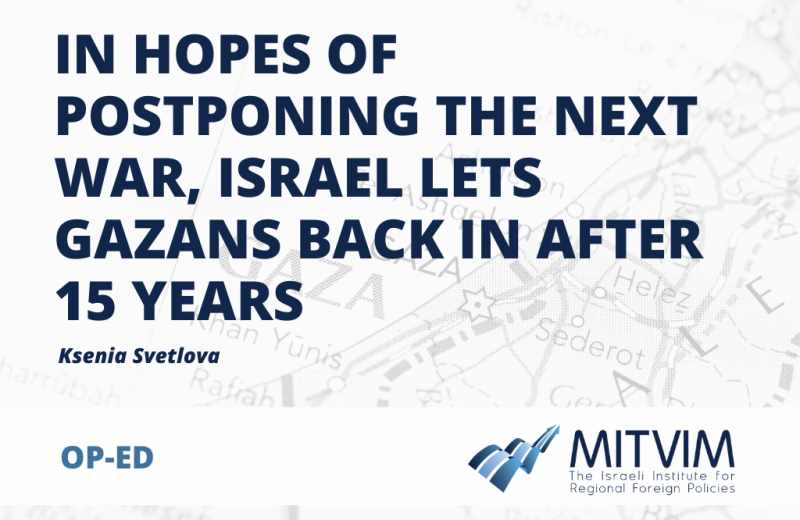 10,000 laborers get work permits to cross the border

Recently, Israel increased the number of Gazans allowed to work in Israel under “merchant permits” to 10,000, although 90% of them are not engaged in trade. After the recent meeting between Israeli Defense Minister Benny Gantz and Palestinian Authority President Mahmoud Abbas, it was rumored that Israel would increase the quota even more to calm poverty-struck Gaza and improve the well-being of its population. Why did Jerusalem change its policy after 15 years of blockade and how will this decision influence life in Gaza and in Israel?

“These days it’s impossible to approach the Chamber of Commerce in Gaza. Thousands of desperate men wait there every day to apply for ‘merchant permits,’” Issam Ghazaleh, a resident of Gaza City, tells The Media Line. “Today this is the only way to get to Israel, to have an opportunity to earn some money and provide for your family.”

Ghazaleh used to work in Israel, until 2000. Then the Second Intifada broke out, and soon the number of labor permits was significantly reduced.

Since the Hamas coup d’état in 2007, only a few dozen Gazans – mostly large-scale traders and patients at Israeli hospitals who carried special permits – were able to cross into Israel each day. Ghazaleh, who by then was 60 years old, never returned to work in Israel. Now some men in his family hope to acquire a coveted permit. Only a few will succeed.

“I personally thank everyone who was involved in this decision [by Israel to issue more permits],” says Fayyez, a Palestinian who currently works in Ashkelon. “We want to work; we don’t want to depend on food cards or charity packages. Palestinians from Gaza always worked in Israel, and both sides benefited.”

He and his brothers and sons worked for many years in Kibbutz Kerem Shalom, where they developed excellent ties with local families.

The unemployment rate in the Strip exceeded 50% in 2021, which is why many Gazans equal an Israeli work permit to a winning lottery ticket. In Israel, some decision-makers believe that by allowing Gazans to pass through the Erez crossing, Israel can postpone the next wave of hostilities with Hamas.

“Israel doesn’t have any other option but to let the Gazans work here,” Maj. Gen. (res.) Kamil Abu Rukun, the former head of COGAT, the Israel Defense Ministry unit that deals with civilian issues in Gaza and in Area C of the West Bank, tells The Media Line.

“That’s what we have tried to do since 2014. We succeeded in delaying the next war. Instead of an outbreak of violence once every three to four years, it happened [in May 2021] after seven and a half years. The economy is the key factor here. Also, Hamas is afraid of economic hardships as the population might turn against them,” Abu Rukun says.

A place under the sun

“We are ready to work hard, and every Israeli knows this,” says Fayyez, who now spends more time in Ashkelon than in his hometown in Gaza.

“Gazans’ only concern today is that they will be deceived by dishonest people in Israel. They need to know that at the end of the day they will get their money. Today they can’t even turn to the police, since they have a merchant permit and not a regular one,” he continues.

Fayyez adds that it’s harder to find work in Israel than before. “The Gazans were absent for 15 years, and their places were taken by others,” he says.

Pepe Marzipar, a member of Kerem Shalom, tells The Media Line that for now there are no laborers from Gaza in the kibbutz, although in the past it relied heavily on them in its factories and fields.

“Since they’ve been gone, laborers from the South Hebron Hills [in the West Bank] were brought here to work,” says Marzipar, who decorates his home with art made of parts of Qassam rockets that often strike the kibbutz and its vicinity. He speaks fondly of Palestinian families from Gaza whom he knows well from the old times. “Some of them worked in the factory, others in construction or as movers. I know that some already found work in [Kibbutz] Nitzanim, Ashkelon and other places around here,” he says.

Unlike the 100,000 Palestinians from the West Bank who enter Israel legally every day with regular work permits, Gazans can only get to Israel with a merchant’s permit. This reality creates many problems, says Abu Rukun.

“When the laborer is going through the standard procedure, he is protected, health- and salary-wise. If he falls and hurts himself, there is insurance. He knows where to go if his salary is delayed. But the ‘merchants’ do not have an address to complain to or report maltreatment,” he says.

Even 10,000 work permits will inject approximately NIS 1 billion ($323 million) into the Gazan economy, Abu Rukun says. He believes there is no problem with demand for the workers, as the majority work in construction and other sectors that always need more people.

For years Israeli authorities hoped that economic pressure would strengthen the anti-Hamas sentiment in the Strip and eventually help bring about a revolt against the Islamist movement. Some experts also said that laborers from the Strip could be dangerous since Hamas operatives might hide among them.

Just a few weeks ago, the Shin Bet security service announced that a Palestinian and an Israeli citizen had been arrested in Jaffa on suspicion of espionage, and indictments were filed against them. According to the indictment, the pair tried to locate and photograph locations of Iron Dome rocket defense units and IDF bases.

But Abu Rukun dismisses such fears. “I do not believe that these laborers will constitute a threat. Only a few ever used this framework to harm Israel. They are breadwinners and each one provides for many others. Israel has no choice but to let them work; we must do a good job facilitating this,” he says.

Meanwhile, Fayyez, Ghazaleh and thousands of others in Gaza hope and pray that the current stability will continue and allow them to work and provide for their families back home.

“If there will be work, there will be no war,” says Fayyez. “People will be busy with their work and ways of making more money. We really need this today. I hope that there will not be another war.”