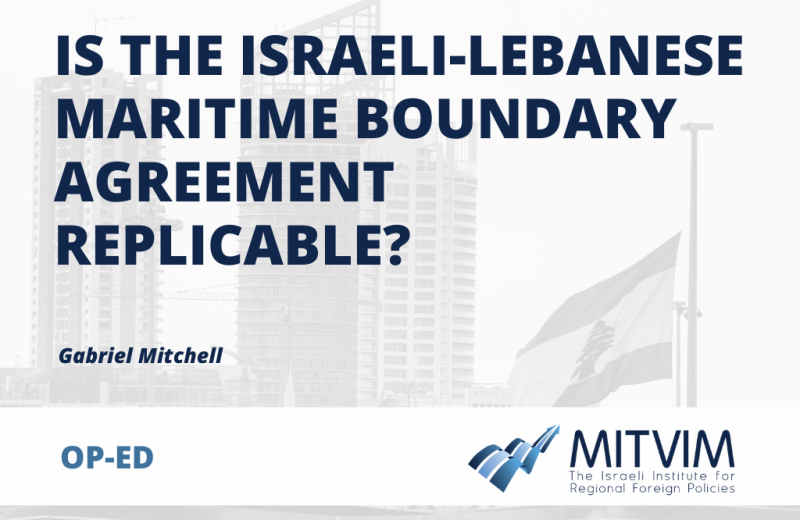 For the past decade, policymakers have argued that the Eastern Mediterranean’s offshore natural gas deposits could help support Europe’s efforts to wean itself off Russian hydrocarbons. But maritime disputes between Eastern Mediterranean states over access to these resources — and questions about the feasibility of several grandiose projects — dampened commercial interest.

These assumptions were momentarily suspended when Israel and Lebanon finalized a maritime boundary agreement after 12 years of sporadic and interrupted efforts. With Washington’s mediation, the parties reached terms that would allow them both to exploit the sea’s riches and encourage foreign investment. For two states who share a long history of violence, grievance, and distrust, it was a significant achievement.

Could Israel and Lebanon’s willingness to compromise set in motion a domino effect that unlocks the region’s stranded hydrocarbons? And could this happen quickly enough to help Europe deal with its current energy problems? Israel and Lebanon are hardly the region’s only quarreling parties. Greece and Turkey have a decades-long, multifaceted maritime dispute, and the Cyprus conflict has a maritime dimension as well.

The combination of incentives, timing, and effective mediation that worked for Israel and Lebanon will be hard to replicate. Yet their path to compromise, particularly the decision to shift away from international legal arguments in favor of addressing core national interests, successfully demonstrated how other Eastern Mediterranean actors could find creative solutions to their own disputes.

A confluence of events created uniquely conducive circumstances for Lebanon and Israel to reach an agreement. Economic conditions in Lebanon, exacerbated by the tragic 2020 blast in Beirut, compelled the Lebanese government and Hizballah to temporarily set aside their ideological opposition to Israel for the sake of brokering a deal that could potentially unlock valuable gas deposits and avoid open conflict. But this was not the only geopolitical development that made the agreement possible. The signing of the Abraham Accords also encouraged indirect talks, weakening Arab opposition to engagement with Israel. And the West’s commitment to finding alternative oil and gas supplies for Europe further convinced the Biden administration to continue mediating between the two sides. The timing of domestic political developments was also fortuitous. Due to pending elections in Israel, Lebanon, and the United States, each of the negotiating parties, as well as the mediating party, hoped that a deal would help their standing at the ballot box.

Crucially, this confluence of events over the last 18 months led negotiators to shift from international legal arguments toward addressing Israel’s and Lebanon’s core interests. For Israel, this meant emphasizing national security concerns such as stabilizing the Lebanese economy, establishing a deconfliction mechanism along its northern maritime boundary, enabling the safe development of the Karish gas field, and achieving de facto Lebanese recognition of the buoy line Israel installed after its 2006 war with Hizballah. For Lebanon, this meant overlooking its boycott of Israel in order to convince international oil and gas companies to explore and develop its waters. Indeed, even the potential of future development could be enough for Lebanon to improve its position with the International Monetary Fund and enable it to court investments from other countries. This shift managed to break the deadlock that had muddied past mediation efforts.

The decision by Israel and Lebanon to shift away from focusing on international maritime law is very much in the spirit of the United Nations Convention on the Law of the Sea, which was established as a guideline rather than a strict rulebook for delimitation agreements. The past decade saw a variety of potential maps with multiple, competing boundary lines representing each country’s rival legal arguments. Tellingly, the current agreement doesn’t include a map that domestic political opponents could challenge. This reflects the underlying reality that the benefits of an agreement outweigh the technical merits of any specific set of claims.

Finally, the agreement reinforces the argument that an informed and invested mediator may be more effective at producing a breakthrough in certain negotiations than a neutral one. Historically, Israel has always relied on the United States to mediate between itself and its regional neighbors, in large part because Washington was the only party who could offer security guarantees in exchange for Israeli concessions. Lebanese negotiators — due to a combination of their own concerns about American neutrality as well as Hizballah’s combative stance — were often reluctant to rely on U.S. mediation. But in this case, they begrudgingly acknowledged that Washington was the party most likely to deliver an agreement.

Still, the United States didn’t accomplish this alone. Supporting actors like France and Qatar encouraged the parties to reach the finish line. The United Nations, an observer during the mediation process, also played an important technical role that enabled the parties to meet on several occasions along the Israel-Lebanon border. Finally, energy companies Energean and Total demonstrated creativity and flexibility while advocating for pragmatism.

And this collective effort may have still come up short if it wasn’t for the singular persona of U.S. special envoy Amos Hochstein. Not only did Hochstein possess an intimate familiarity with the energy industry, the Israeli and Lebanese actors, and President Biden himself, but he also benefited from having previously tried and failed to bridge the gaps between the parties during his time in the Obama administration. The combination of experience, access, and personal investment enabled Hochstein to cut through the noise where others fell short and push the parties towards an accord. Simply put: Hochstein was much more than a messenger from the White House.

Can these conditions be replicated elsewhere in the Eastern Mediterranean? Early signs suggest that the international buzz surrounding the Israel-Lebanon agreement has encouraged more regional actors to thaw their own frozen negotiations. Lebanon and Syria reportedly attempted (but failed) to restart negotiations on their own maritime boundary dispute. According to various outlets, Egypt, Israel, and the Palestinian Authority are also trying to advance talks on developing the long-ignored Gaza Marine field. More realistically, Israel and Cyprus have promised to put their outstanding issues over the Aphrodite-Yishai field to bed.

Each of these disputes has its own unique complexities, yet they pale in comparison to the Eastern Mediterranean’s true Gordian knot: the ongoing and often interconnected maritime disputes between Greece and Turkey and the divided island of Cyprus. Agreements on these issues would not only reduce the probability of regional conflict, but could potentially open the door to previously dismissed partnerships in the field of energy and beyond. The circumstances may be considerably less conducive here, but there are still useful lessons to be drawn.

First, it was the prospect of exploiting offshore gas reserves that helped Lebanon and Israel see a settlement as being win-win. In the case of Greece and Turkey, their maritime dispute doesn’t promise an immediate economic bounty, thus eliminating the most obvious potential incentive for settlement. And while offshore hydrocarbons have been discovered in Cyprus’ waters, the stakes are also considerably higher, specifically as they relate to the territorial sovereignty of the Republic of Cyprus.

The timing of domestic elections helped push Israel and Lebanon over the finish line. However, the elections being held in Cyprus in February 2023, Greece in July 2023, and Turkey in June 2023 are likely to have the opposite effect. With the economic benefits less imminent and the issues of sovereignty more prominent, elections will make it harder for decision-makers in Nicosia, Athens, and Ankara to compromise

Turkey’s approach will prove particularly pivotal. Like Lebanon, regional energy initiatives have left it on the outside looking in. Over the last decade it has frequently forced itself into Eastern Mediterranean energy politics, often by trying to change the legal or security realities at sea. The question is whether the lessons from the Israel-Lebanon agreement will embolden a more muscular or more compromising line from Ankara. The Turkish Ministry of Foreign Affairs issued an October 27 press release welcoming the Israel-Lebanon agreement and stated that “this model, which reflects similar practices around the world, sets a good example for the region and in particular for Turkish and Greek Cypriots.” This might suggest a more moderate tack. But Cypriot President Nicos Anastasiadis countered by noting that Turkey has rejected past mediation efforts and declined to submit claims for international arbitration.

It is naive to expect overnight results. Israel and Lebanon negotiated for a decade, suffering multiple setbacks before making a breakthrough. By comparison, many of the region’s other maritime disputes are further behind in the process. To make matters more complicated, Europe plans to have shifted considerably to renewables by decade’s end. On the positive side though, Greece, Turkey, and Cyprus don’t have to deal with interference from a non-state actor like Hizballah.

The Israel-Lebanon agreement suggests that the right balance of timing, compatible interests, and an invested mediator can yield a breakthrough. Resolving maritime disputes is not only about extracting resources, but also about removing sources of conflict and gradually developing trust between aggrieved parties. Even if the hydrocarbon age is slowly coming to an end, there are multiple reasons why the United States, Europe, and Eastern Mediterranean states should pursue similar types of maritime agreements in the months and years to come. The blueprint provided by Israel and Lebanon is as good a starting point as it gets.

Israel-Lebanon
Prev
All Publications
Next