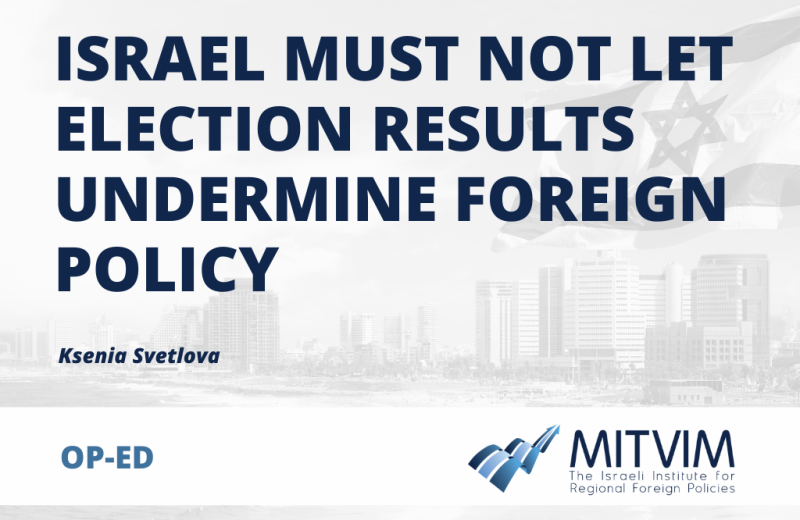 Although coalition negotiations are still underway, there is little doubt regarding the identity of Israel’s next prime minister. Benjamin Netanyahu is a seasoned political hand and enjoys vast international connections.

But the world he faces at the end of 2022 is very different from the one he knew as prime minister two or three years ago. His new coalition is likely to diverge from others that Israel and the world have known, without the required checks and balances to restrain its extremist partners from the Religious Zionist party.

Stay away from Putin’s camp

In the 2019 election campaign, Netanyahu used photos of himself with former US president Donald Trump, President Vladimir Putin and Prime Minister Narendra Modi to promote his foreign affairs expertise. He presented himself as a full partner of the global conservative axis peopled by leaders such as Hungary’s Viktor Orbán, Britain’s Boris Johnson and Brazil’s Jair Bolsonaro. The opposing camp included former US president Barack Obama, Jewish Democratic voters, the European Union and liberals of various hues.

Two years ago, Trump lost the US elections and in February of this year, President Putin invaded Ukraine, a watershed geopolitical development that has divided the world broadly into anti-Putin and the pro-Putin camps. Friendship with the Russian dictator is no longer a source of pride: the war in Ukraine has largely united Europe and strengthened its relationship with the US and the NATO alliance.

Israel’s cautious position in relation to Russia and its refusal to sell defensive weapons to Ukraine is raising eyebrows in the West. Before the elections, Netanyahu promised his Russian-speaking supporters to consider selling weapons to Ukraine but that was before the elections. His government will have to deal with this sweeping change in Western perceptions in relation to Russia and to those who express support for it or do not condemn it sufficiently. Over the past eight months, Netanyahu has maintained a circumspect silence regarding the war in Ukraine but rarely criticized the Bennett-Lapid government for its cautious policy. The question is how Netanyahu will reshape his relationship with the Russian ruler after years of boasting and bragging about their close friendship.

Avoid damaging the fabric of relations with the Arab countries

Arab capitals have been silent so far about the Israeli elections, waiting for the final results and the formation of the government. There is no doubt that Netanyahu, the architect of the Abraham Accords, is determined to return to resume his involvement in this arena and even succeed where his predecessors Bennett and Lapid failed in expanding the circle of countries normalizing relations with Israel. But even if the Gulf countries, Morocco and Egypt wish to continue the partnership with Israel and expand it, they cannot ignore the far more radical leanings of the emerging government on the Palestinian issue.

During the recent escalation in Gaza, the Union of Gulf Principalities was the first to call a meeting of the UN Security Council on the Palestinian issue, while Jordan strongly condemned Israel’s actions. Saudi Arabia has said clearly that it would only normalize relations with Israel once progress is achieved in solving the Israeli-Palestinian conflict.

The Arab world is not as exclusively focused now on the Palestinian issue as it was 20 or 30 years ago but there is no doubt that violent clashes in the West Bank, clashes at Al-Aqsa mosque in Jerusalem or further escalation against Gaza will trigger a wave of angry reaction in the Arab world and further opposition to the Abraham Accords. Any talk of annexation will undermine the foundation on which the peace agreements between Israel and the Gulf Principalities were built.

It is also important to add a few words about Jordan: relations with the kingdom improved under Foreign Minister Gabi Ashkenazi and continued to improve when Bennett and Lapid were in office. The task of any future government is to preserve the strategic relations with Jordan, Egypt, Morocco and the countries of the Abraham Agreements.

To this end, and also to preserve Israeli interests, it is important to avoid policies that risk undermining the Palestinian Authority and contributing to its complete collapse. Netanyahu’s partners in the Smotrich-Ben-Gvir bloc will pull the government toward extreme positions, such as lobbying for the annexation of Area C, population exchanges, increased demolition of Palestinian homes, and more.

It is not clear how the Prime Minister will balance the demands of this bloc, but such a gallop into the abyss could cost Israel dearly – both in relations with Arab countries and with Europe and the US.

Israel and the Palestinians

It is important to understand that today the Palestinian Authority is on its last legs. A small push, a slight tap on the shoulder and this rickety structure will collapse. Will the expected ensuing chaos create a convenient opportunity for annexationists who dream of taking over the most attractive and largest part of the Palestinian Authority? In the summer of 2020, Netanyahu proposed annexing the Jordan Valley – Area C. In addition to warnings about the reaction of the Arab countries, especially partners in the Abraham Accords and Jordan, it is important to understand that such a step would set off a severe chain reaction in the Western world. This is not only the traditional position of the US and the European Union, which support the formula of two states for two peoples and oppose unilateral measures by Israel that may harm a future solution.

Any Israeli annexation in West Bank will invariably be compared to Putin’s annexation of Ukrainian land, encouraging critics of Israel wherever they may be. It is quite clear that the emerging right-wing government will be unable or unwilling to promote any peace solution with the Palestinian Authority. Will Netanyahu be able to prevent deterioration and withstand his partners’ determination to fulfill their promises to the voters and promote annexation, deportation, demolition of houses and legalization of illegal outposts? Netanyahu undoubtedly knows that in order to maintain good and open relations with the US and Europe, Israel must avoid extremist policies toward the Palestinians. The West is ready to accept the status quo, but will not hesitate to respond to developments reminiscent of Russia’s actions in Ukraine.

Post-election Israel needs a clear, cautious foreign policy. Any future Israeli government must preserve the country’s standing in the international arena and avoid harming the good relations with its friends in the democratic world.

The op-ed was published in November 2022 in JPost.

Israeli elections
Prev
All Publications
Next