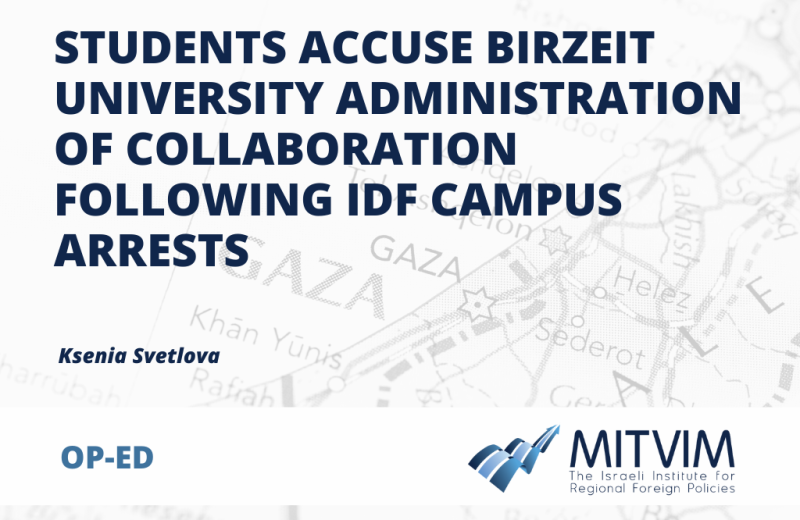 Birzeit University students are demanding that the administration be replaced, since it was unable to protect students and guarantee their safety following the arrest of five students by Israel Defense Forces soldiers on the campus, located near the West Bank city of Ramallah.

On Tuesday, hundreds of students protested against the Israeli raid that took place on the campus the previous day. The five arrested students belong to Hamas and Islamic Jihad, and two of them were released the same day. The arrests took place during a student strike over tuition fees that began days earlier.

Many Palestinian activists both online and at the university protest accused the administration of collaboration with Israel and attempts to normalize relations with Israel while students are being arrested on campus. Others stressed that the arrests occurred while students were in the midst of fighting against the rising costs of studying and living on campus.

According to a statement released by the university on Monday night, all disciplinary measures against student activists over activities during the previous weeks were suspended. According to sources at the university, its president, Professor Beshara Doumani, who was appointed to his position in October 2021, is currently abroad.

The arrests are definitely not the first to take place at Birzeit, Mohammed Daraghmeh, a bureau chief of Asharq News, told The Media Line. “There were also arrests on campus in December 2021, as well as in October 2021. It seems that this time the situation was also aggravated due to internal tensions between different Palestinian factions on the campus.”

According to the Birzeit University website, Israeli forces in 2020 arrested 58 of its students, including six females. In October of that year, Israel’s military declared the Democratic Progressive Student Pole (DPSP), the leftist student body on campus, to be an “unlawful association.” Last month, Israeli soldiers staged a late-night raid on the faculty buildings of the university and searched the area.

The IDF is not the only force that performs arrests on Birzeit’s campus. After recurring violent outbreaks between Fatah and Hamas activists on the campus, PA security forces last month arrested a few students who were directly involved in the violence. This development brought waves of criticism against the university administration.

A Birzeit student who spoke to The Media Line on condition of anonymity, describes the atmosphere at the university as “toxic” and emphasizes that the tension between the factions has grown significantly since Palestinian parliamentary elections scheduled for May 2021 were postponed indefinitely. Experts believe that Hamas is currently the strongest and the most popular movement at Birzeit, which was once a stronghold of the ruling Fatah movement. The decision by Palestinian Authority President Mahmoud Abbas to postpone parliamentary and presidential elections was highly criticized by Palestinian political and human rights activists, and by Hamas and other Palestinian movements, as well as by some ex-Fatah leaders who planned to run against both Fatah and Hamas.

Violent events also have taken place at other Palestinian universities. Dozens were injured during clashes at Al-Quds University, which has campuses in Jerusalem, Abu Dis and al-Bireh, while Mahran Khaliliyeh, a nursing student at Arab American University in Jenin, was stabbed to death at the entrance to the campus on December 4 during a brawl between politically active students.

Sam Bahour, a Palestinian businessman who used to be a member of the Birzeit University board of trustees, is concerned about the absence of a reaction by the PA education minister, as well as the prime minister.

“Birzeit is a 16,000-student-strong university. Its doors have been shut, the students are on strike and the atmosphere is toxic. I keep asking: Where is the minister of higher education? Where is the government to mediate and interfere? Also, after a few days of strike, a prime minister could also say a few words, I believe,” Bahour told The Media Line.

Dr. Ghassan Khatib, vice president of Birzeit, told The New Arab that the current conflict also derives from the fact that the Palestinian Authority “doesn’t comply with its financial commitments to the university,” but insisted that the university stands united with the students to condemn Israeli raids and arrests of students.