With No Israeli Reporters on the Ground, Gaza Remains Invisible to Public 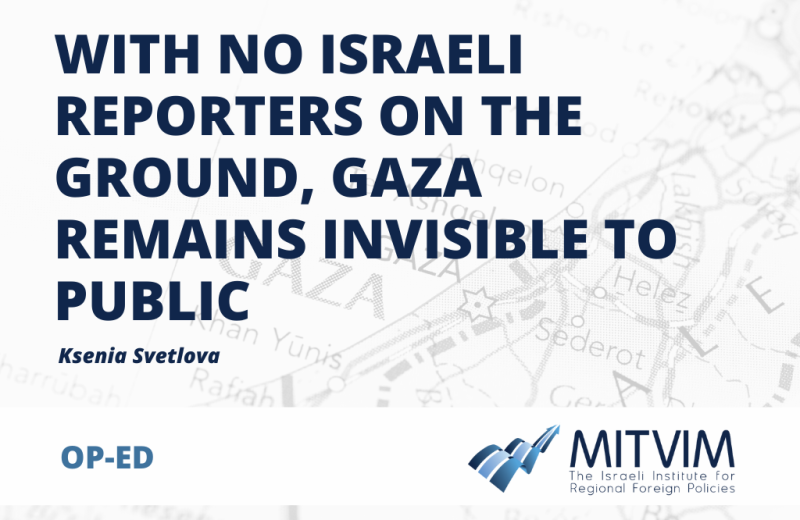 Many Israelis use questionable resources upon which to draw knowledge about life in the coastal strip, while some Israeli journalists dream about returning to Gaza to do their job again

In 2006, Israeli reporters were banned from entering the Gaza Strip and doing their job there – reporting on events in Gaza.

At first, the ban that was introduced 15 years ago by the Israel Defense Forces Southern Command seemed temporary; in June 2006, Israeli soldier Gilad Shalit was kidnapped into Gaza, and during that turbulent year a few reporters were kidnapped by terrorists, as well. But the following year Hamas took full control of Gaza, and the ban was never lifted.

Since then, Israeli reporters and foreign reporters with Israeli nationality are not permitted to enter Gaza. They can observe the Strip from nearby cities and kibbutzim near the border in southern Israel – and during military operations there often are long lines of cameras and reporters based there. But, despite its geographical proximity and importance to life in Israel, the Strip has become a kind of Forbidden City. While Israeli reporters do recognize the dangers inherent in reporting from Gaza, they admit that Gaza is currently underreported in the Israeli media and dream about returning there to do their job again.

“Certainly, today Gaza is very low on the media’s agenda, largely because we, the Israeli reporters, cannot work there. Once, until mid-2006, it was easier; you went there to report not only on security but also on other aspects of life. Not through the ‘security lens.’ All this is gone now,” Ohad Hemo, Palestinian Affairs correspondent for Israel’s Channel 12, told The Media Line.

According to Jacky Hugi, Arab affairs editor and host at Israeli broadcaster Galei Tzahal, the absence of Israeli reporters on the ground has hurt significantly the spread of information about the severe humanitarian crisis in the Strip and has affected Israeli public opinion about what is really happening in Gaza.

“The fact that journalists and officials in various positions, such as doctors, academics and politicians, are barred from entering the Gaza Strip, has been very damaging to both sides, especially in the humanitarian aspect. Gaza is experiencing a severe humanitarian crisis. It cried out for years, and no one in Israel listened, because those who were outspoken about it were mainly Hamas leaders, and their statements were perceived as propaganda,” Hugi told The Media Line. “If Israeli journalists had entered there and seen the reality with their own eyes, the suffering of the population would have been presented to the Israeli public in voice and image. It did not happen. Both sides, each for his own reasons, prevented the safe entry of journalists and others, thereby harming the interest of the residents of the Gaza Strip and contributing to the exclusion of their suffering from Israeli public opinion,” he also said.

In the absence of civil reporting on Gaza, many Israelis rely on questionable resources upon which to draw knowledge about life in the coastal strip, such as viral videos on WhatsApp and Facebook that present a rosy picture of life in Gaza and focus on lovely villas, manicured lawns, and trendy malls. This, despite the fact that every reporter that has ever covered the Strip knows that these photos represent the tiny minority of Gazan millionaires, while the vast majority live well below the poverty line and over 50% of Gazans are unemployed.

At the same time, Gideon Levy, a veteran journalist at the left-wing daily Haaretz newspaper who has reported on Palestinian affairs for many decades, believes that the ban on Israeli reporters didn’t change much the public perspective of the conflict and human suffering in the Strip.

“Personally, for me, this ban was extremely dramatic. It took away most of the work that I could do. If you’ll offer me now to go anywhere, I would choose Gaza. However, publicly, I know that there wouldn’t be much of a difference. Military reporters would mostly go there, while only a few would read my reports from there. How do I know that? The West Bank is open, and it is severely under-covered today. People just don’t want to know, they don’t want to be bothered with the facts,” Levy told The Media Line.

It is not clear how dangerous Gaza would be today for Israeli reporters, given that Hamas has controlled all aspects of life in the Strip for the last 15 years. While all of the journalists interviewed would love to have a chance to visit Gaza again, many admit that the situation there is far from being stable or secure for Israeli citizens armed only with pens, pencils and cameras.

“The last time I was in Gaza was during the disengagement period, just before Hamas took control of the Gaza Strip. The last visits were very, very tense, and for the first time I felt a certain insecurity, and once I even said that I was a foreign and non-Israeli journalist, something I had never done before, in many years of covering the Strip,” said Anat Saragusti, a veteran Israeli journalist and director of Press Freedom Projects for the Union of Journalists in Israel. “Foreign journalists can enter Gaza, but they too are under some cloud and have to resort to local fixers. Can local fixers be completely independent? Is there any journalistic approach to decision-making centers in the Gaza Strip? What I am trying to say is that it is not just because of the ban on journalists, but also because the situation in the Gaza Strip is so problematic on so many levels,” she added.

In the past, Saragusti says she often traveled to the hottest spots, such as Gaza during the first and the second Intifada, as well as to besieged Beirut during the 1980s.

Hemo believes that the concerns of the Israeli army are not farfetched. “They tried to kidnap me there,” he said of his time in Gaza. Despite this, Hemo asked Hamas authorities again for a permit to enter the Strip but was flatly denied. “They told me: ‘You are not welcome here,’” he said.

Gideon Levy says that many foreign journalists work in Gaza and, despite the presence of Hamas are able to successfully do very good work there. “I understand the army’s concern. However, we, the Israeli reporters, could also be kidnapped in the West Bank, and we are still allowed to go there. The thing is that Gaza, as well as the Israeli-Palestinian conflict at large, is not part of the agenda anymore. Not only Israelis; the world had lost interest in the conflict, everything is stuck. No one knows what to do with them [the Palestinians] so we prefer to act as if there is no elephant in the room,” he said.

Levy says that he is happy with every piece of reporting that re-humanizes the Palestinians and Gaza. “Unfortunately, there are very few of those,” he said.

“Gaza is the real thing,” added Hemo. “I would love to go back there, of course, if given a chance.”

For now, as Israel moves in circles between the rounds of cross-border violence, interest in what is happening in the Strip only arises when the rockets fall again on Israeli cities.